Time
Allow 7hr to the Biv

Pfeifer Biv lives alone on the shoulder of Mt Pfeifer, which rises to 1704m above the southern shore of Lake Kaurapataka.  With steep climbs on all sides it would be an awkward diversion on a longer tramp but with three days it makes a perfect pit stop on an impromptu loop between fronts or on a long weekend.

From the car park off SH73 there is a direct route to the tops up Paratu Stream, which joins the Otira just below the Deception River. Ever so slightly misplaced, we had to push through some thick gorse to get to the soggy paddock at the foot of the stream. We walked round a few cows too busy chewing cud to move before finding the stream bed and the start of the climb.

The stream was the best kind of open staircase and the junctions were marked with little tin arrows. After about an hour the stream entered a subalpine scrub tunnel and we stepped inside. Deft track cutting had left just enough room through the fuschia, dracophyllum and holly for a tramper and a pack and this continued all the way up to Waharoa Saddle.

From the saddle we could look out west beyond the highway to the Kelly Range and east to the Taramakau watershed. As we had a breather, a West Coast coal train went by growling so loud that our thoughts went to the crumbly Arthur’s Pass greywacke under our feet.

The mist began to sidle in as we gained the last 300m to the tops, also beautifully snipped of scrub. As we traversed the sturdy tussocks in the basins above Pfeifer Creek, the cloud thickened like cream. The compass was very useful: a surprise gap in the mist revealed the Biv, well tethered to its perch on the side of a natural amphitheatre. 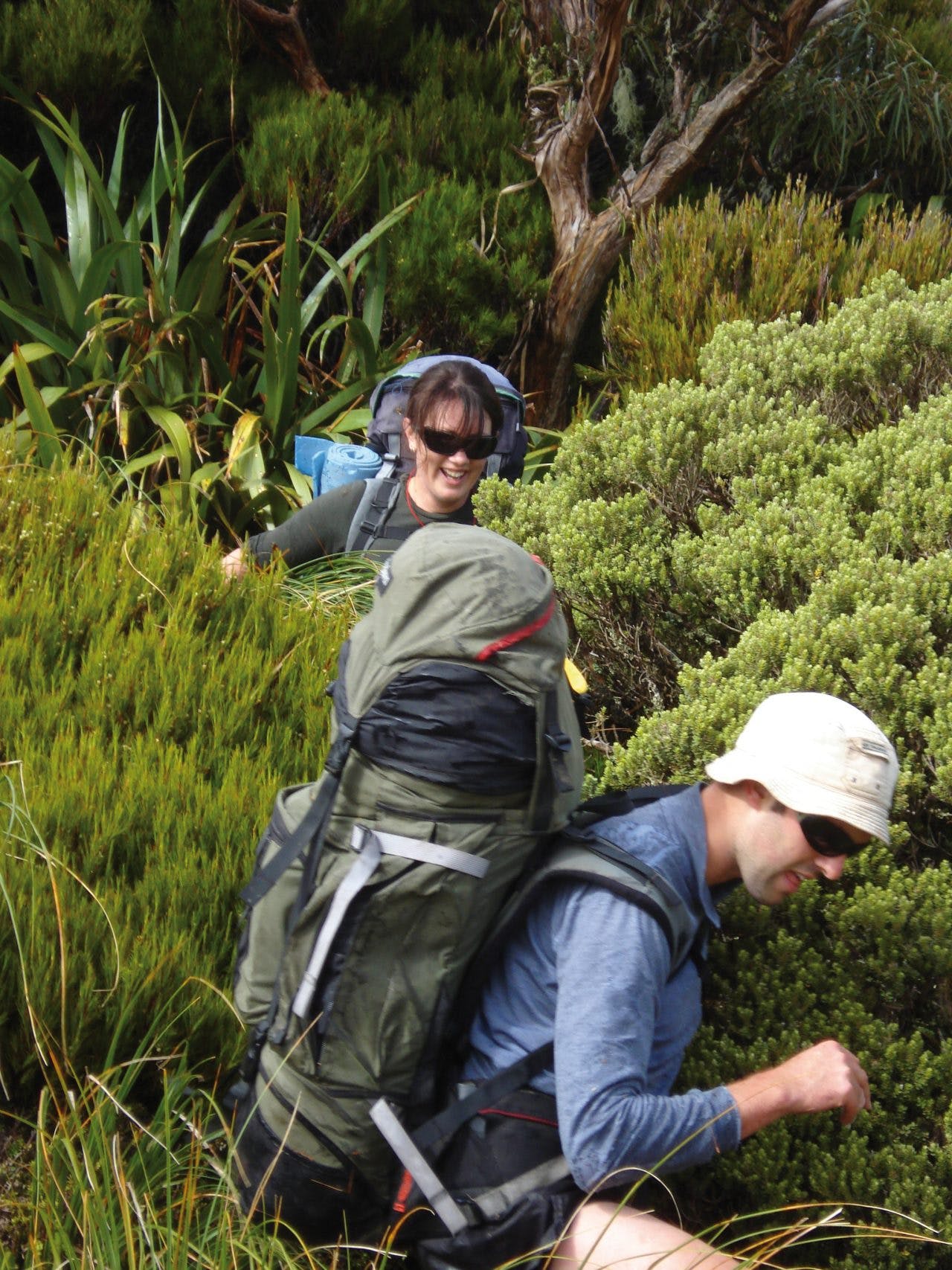 In the scrub during the descent above Lake Kaurapataka

The disorganised nature of the trip meant the Biv was extra surprising. I had seen a photo of the 1960s character, which was a classic dog-box and (although this was not apparent from the photograph) collapsed off its piles. We were carrying a tent and there was plenty of charming, if misty, camping about.

The tent’s services were not required. The current Biv was built in 2008 and is the same design and era as East Hawdon. It has few visitors, but some regular friends who also help to maintain the track and to whom we gave grateful thanks.  Although it is prone to condensation, it is tidy and warm.

The three of us had a sound sleep and woke up to grandstand views of Mt Alexander and the Kaimata Range. Notes in the hut book suggested we descend to the Taramakau via the next marked creek east, which is shown on the map diving into Pfeifer Creek from the 1100m contour. Although some water may flow in heavy rain, the creek is more often a rock slide. A hearty band of scrub is marked on the map but the gravel starts before the plants get too engrossing.

Although the descent required some sure feet on fast moving rocks, it was direct. Lower down, trees provided some relief from the constantly moving slide. We had lunch in Pfeifer Creek and then hopped down to the junction with Lake Creek.  Although the road end is only 5km from here, we rounded off the trip with a short overnight diversion to Lake Kaurapataka and Kiwi Hut via the Otehake River, which gave us three days of random perfection.