Moehau stands guardian over the Coromandel Peninsula. The sacred mountain is home to patupaiarehe, supernatural beings or fairy folk who are said to live in the swirling mists of the mountain-top. The summit is the burial place of the chief of the Te Arawa canoe, and the full name of the mountain, Te Moengahau-o-Tamatekapua, means the windy sleeping place of Tama Te Kapua.

Legend has it that it’s also home to the Moehau Man, a giant hairy Bigfoot who now features in a children’s television show called Moe.

At 892m, Moehau is the defining point of the Coromandel Range and the highest peak until you reach Te Aroha in the Kaimai Range to the south. Reaching the actual summit is not possible due to the fact it is an important burial ground for Maori.

Trampers wishing to experience the Coromandel’s highest peak can, however, hike to the saddle beneath the summit and still enjoy spectacular views across the Hauraki Gulf to Auckland and the Sky Tower.

Our trip began with a helicopter ride courtesy of the Moehau Environment Group, which had offered to fly us in as part of their summer programme. We were dropped right into the montane vegetation on the windy saddle on the eastern side of the summit.

Moehau is an important site for the rare and tiny Archey’s and Hochstetter’s frogs, and while it’s not a good idea to disturb their habitat by looking for them, an Archey’s actually jumped onto the leg of one of our group. Seeing this beautiful creature with tiger stripes on its hind legs was a highlight of the tramp. 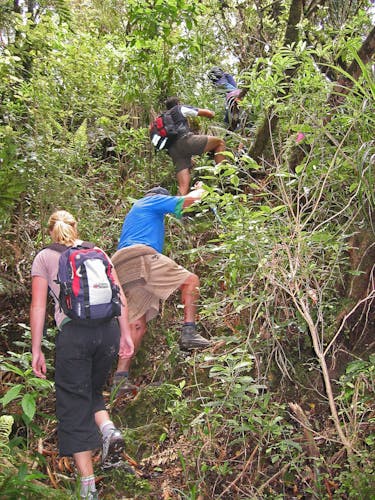 Heading towards the summit from the eastern side

towards Stony Bay. The descent to Stony Bay took about four hours. The track was narrow and steep, and involved uphill climbing and wet stream crossings. Even though it was marked, it would be easy to lose the track if we hadn’t been accompanied by someone who had walked it more than a dozen times. It was hard going and we had to stop twice for rest breaks as some of our party were exhausted. For the rest of us, it was a good challenging hike.

The first stop was a clearing halfway between the saddle and Doctor’s Knob, the only time we got out into the open.  As we descended into the ti tree, we found nikau flowering and brilliant sprays of pink flowers dotted through the bush.

At Stony Bay, the shimmering river and sea on a brilliant blue-sky day were welcome refreshment.

Moehau is not currently promoted as a walk by DOC. However, there is an unmaintained track to the summit starting at Te Hope on the western side, 12km from Colville. The track starts at the base of the mountain after a short walk across a paddock. There is parking on the sea side of the road. Two other unmaintained tracks go from Fantail Bay at Port Jackson, and Stony Bay on the eastern side. It’s possible to hike up one side of the mountain and down the other, but there is no track across the top, and the signage regarding the closure of the mountain-top must be adhered to, so ascending and descending on the same track is recommended.

The hike is dangerous in rain or low cloud due to poor visibility – which also means less chance of spotting the elusive Moehau Man.