Engineering student Luke Sinclair became fed up with carrying empty gas canisters when walking the Te Araroa Trail. So the 24-year-old got to work creating a better way to cook food on long distance tramps and believes he’s found the answer.

Sinclair has designed a lightweight (300g) stainless steel wood burning stove that he says can boil a litre of water in less than 10 minutes.

The Trail Blazer has an outer cone that insulates the inner chamber and provides a sturdy base. 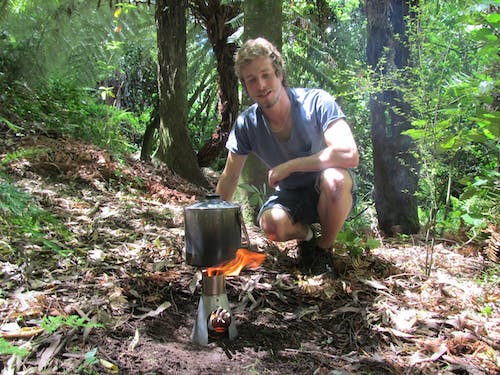 But it differs from other lightweight wood stoves in that it has a removable feed tube which allows access to the base of the fire, making it easier to start. The tube is angled to allow fuel to feed the fire automatically.

“The support cone, feed tube and pot support are all detached and stored within the main chamber,” said Sinclair.

The project – part of his bachelor of engineering degree at the University of Waikato – has taken him a year to research and design and he now has a prototype which he hopes to improve further.

“My ultimate goal is to get this to the point where it could be manufactured and distributed on a profitable scale.” Sinclair knows he has plenty of tests and adjustments to do before this happens but, now his exams have finished, he can take it into the bush and test it in a range of conditions.

“In a couple of years I hope to walk the 4000km Pacific Crest Trail from Canada to Mexico, fuelled solely by the Trail Blazer.” 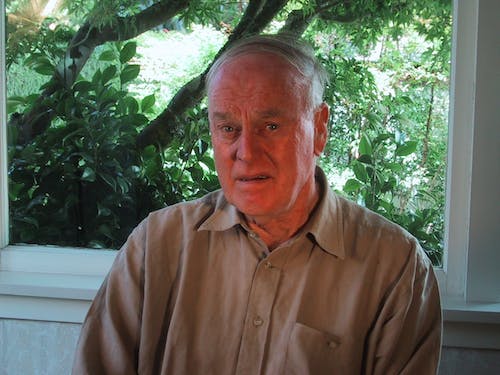 Many in the outdoors community will be sad to hear about the recent death of Bob Ussher, aged 85. An Aucklander and long-term Alpine Sports Club member, Bob also served on the Federated Mountain Clubs executive and, perhaps most importantly, was the man behind the walkways concept.

During the mid-1960s, Bob became inspired by the idea of a national length walkway for New Zealand, similar to those that had already been established in the United States (The Appalachian and Pacific Crest trails) and Britain (the Pennine Way). In 1967, Bob presented this idea to Federated Mountain Clubs. While accepting that it was a highly ambitious goal, FMC endorsed the concept and the 1970s saw walkways committees established around the country. Government supported the concept too, with the Walkways Act passed in 1975. Importantly, this legislation enabled a legal means of access over private land, while also maintaining the property rights of the landowner.

As well as his involvement with walkways, Bob also served on the Coromandel Forest Park Advisory Board during the late 1970s. While walkways faltered through lack of funding during the late 1980s and early 1990s, he was pleased to see the mantle taken up by Geoff Chapple, who spearheaded efforts to finally establish a nation-length trail, Te Araroa.

In recent years, Bob continued to maintain a keen interest in mountain matters.

He died peacefully on 22 October, surrounded by family.

The Wilderness Outdoor Awards are back, and this year we’ve added a new category: your outdoor hero.

They could be someone who has achieved great feats in the outdoors, worked tirelessly for a good cause, inspired you or even saved a life.

Either way, we want to know who they are and why they deserve to win.

In addition to this category we’re also asking you to recommend the stores and brands you’ve been most impressed with over the past 12 months.

It might be the price or quality of the product you took a liking to, or perhaps the ease of transaction or advice and support you received from staff.

Based on the quality of nominations, we’ll choose the finalists and ask you to vote for your favourites in each category.

You have until February 2 to get your nominations in. Head to wildernessmag.co.nz and follow the homepage link to nominate in the following categories:

Remember, we want to know who you’ve nominated and why. The more convincing your nomination, the more likely your choice will make the cut. 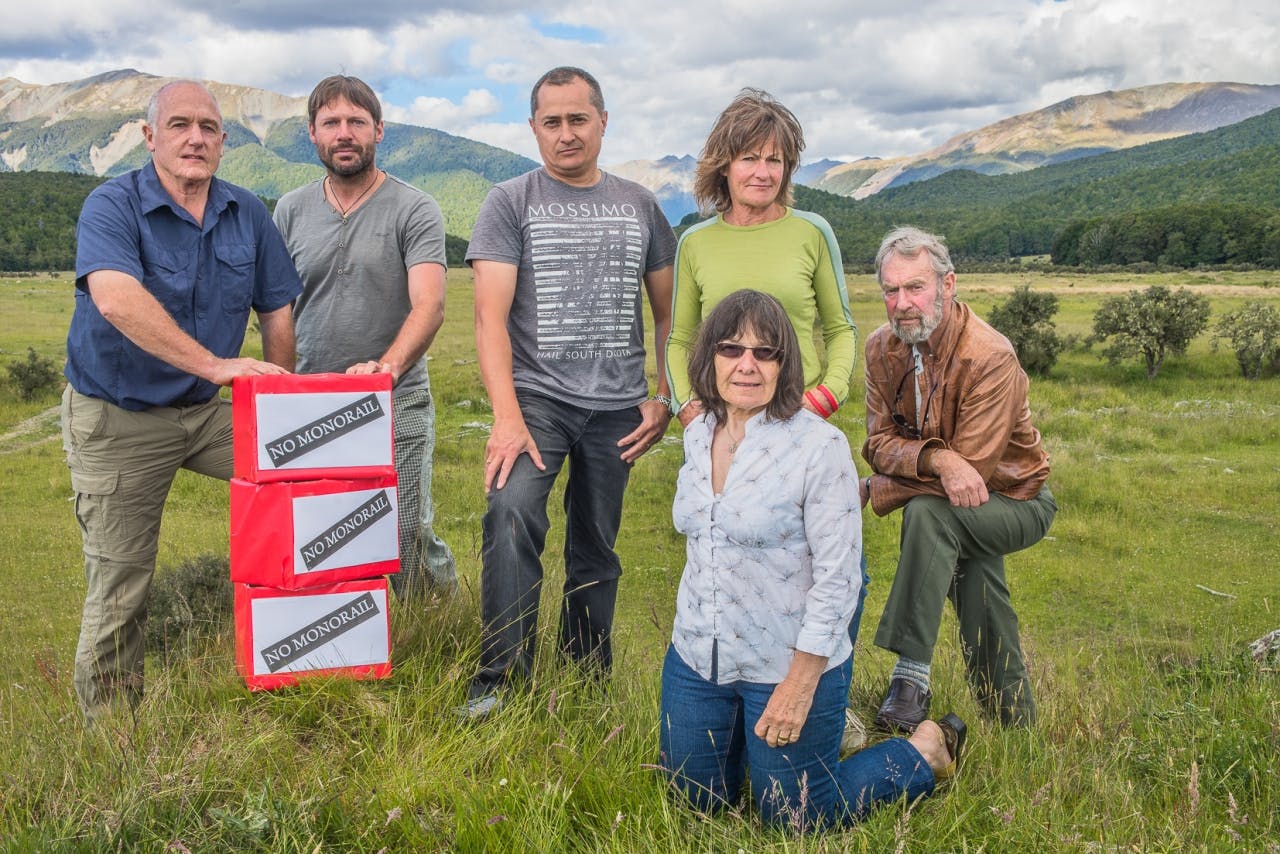 Last Year’s winners from above: Save Fiordland, Small Planet Sports and Macpac.

Put your questions to Maggie Barry

After the post-election cabinet reshuffle, Nick Smith was replaced as Minister of Conservation by Maggie Barry.

And this is your chance to put the questions that matter to the new minister.

Barry is a relatively new MP, having worked in radio and television for 30 years. She was first elected North Shore MP in 2011 and, in her first term, became chair of Bluegreens Caucus – the National Party’s advisory group for conservation and environmental issues.

On her website she says: “We have to be vigilant and face up to our responsibilities and our woeful environmental track record. Down the years we’ve let too many introduced pests decimate our native plants and birds.

“As an island nation we haven’t treated our ocean with the respect it deserves. We’ve allowed some of our waterways to become badly polluted and I want to be part of a government that puts that right.”

So what will Barry bring to the table? This is your chance to ask her questions about her position on conservation issues that matter to you, and about what she hopes to achieve over the next three years.

We’ll select the best of your questions and put them straight to the minister. We’ll publish her answers in the February issue.

Submit your questions on facebook.com/wildernessmag, through twitter @NZWilderness or by emailing editor@lifestylepublishing.co.nz by Monday, December 15. 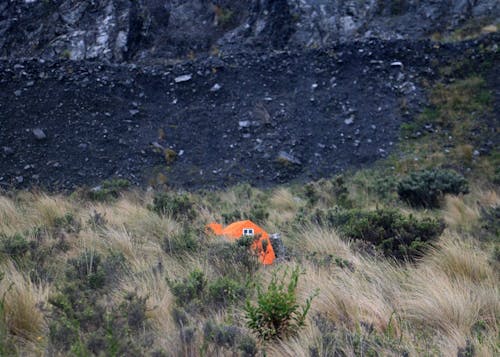 Wellington city now has its own backcountry hut collection, though they may not provide the shelter you’re looking for to escape the capital’s blowy conditions.

Artists Kemi Whitwell and Niko Leyden have dotted a series of miniature huts, complete with track markers and intentions books, across the city.

One of the huts, Aoraki Biv, near Bidwell Street, is big enough to step inside (if you bend over), but the others are truly miniature.

The orange Robin Hut, at Red Rocks Beach, has bunks, fire place, table and seating and even an interior light.

There’s also a hut on Mt Albert, in the Waimapihi Reserve, on Matiu Somes Island and eight huts in the rocks at Tarakena Bay.

Whitwell and Leyden are both keen trampers and received funding from Wellington City Council’s Public Art Fund to create the display.

For precise locations of the huts, take a look at keminiko.com/miniature-hikes and don’t forget to fill in the intentions books as you walk around the city.

We’ve already had a fantastic selection of entries for the 2015 Wilderness Photo Competition.

In October’s issue we asked readers to enter their best photos in either of the following categories: 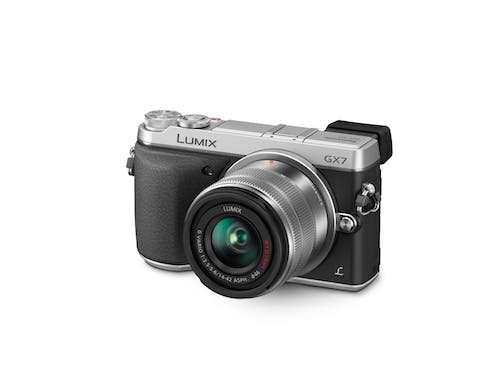 Now summer’s approaching, it gives the best opportunity to get out there and get that perfect shot.

Email your entries to wildernessphotocomp@lifestylepublishing.co.nz.

The closing date for entries is January 31 next year – so that gives you the whole of the summer hols. The winners will be announced in the March 2015 issue of Wilderness.