Access
From the end of Owen Valley East Road, off SH5

Nick Groves plans a quiet trip into Kahurangi National Park, but finds in the warm weather of summer, quiet is hard to get

Mount Owen is a complicated little mountain, which is probably the reason I keep going back to lose myself amongst the intricate bare rock outcrops and softer herb and flower-filled basins. No two trips are ever the same with new corners awaiting discovery and limitless possibilities for getting lost, or at least a little misplaced from time to time. This exploratory approach to tramping allows for an element of the unexpected to creep in, and any adventure worth its salt should always include a degree of uncertainty.

It was time to stretch the legs and head away into the unseasonable sou’westers sweeping up the South Island. The prospect of overcrowded huts and busy tracks over the holiday period begged for an escape to somewhere less well trodden. Mt Owen is a justifiably popular destination, but sufficiently extensive and varied to avoid the crowds, or at least so we thought.

The easiest and quickest approach to reach this limestone summit, which at 1875m is the highest point in Kahurangi National Park, is from the Wangapeka Valley to the north of the range.

This, however, is an even further drive from Lyttelton so with plans of a quiet trip, and to see in the New Year on top of Mt Owen, Marie and I set off for the southern side via the Owen River valley. The large number of cars parked in the field at the start of the track up valley suggested that even this side was ‘occupied’. Maybe they’d already trekked over to the north?

Bulmer Creek offers an interesting route up and through the lower fortifications that surround a lot of the Mt Owen massif, and having been this way some seven years previous, I guessed it would all come back to me. Apart from initially overshooting the actual start of Bulmer Creek and heading up towards Sunrise Ridge (to be explored another time), mostly this was the case, although pink ribbon markers led us on a wild goose chase at one point. The trail from the narrow and impassable waterfall at the head of the Lower Bulmer Creek was more obvious than on my previous visit, and before long we had crawled along the rightward leading ledges to the well-known ‘ladder pitch’. Here, a well-anchored caver’s ladder is conveniently draped over a particularly steep section of polished limestone bluff, and soon we were swinging our way up the final obstacle to easier ground.

After all the excitement, the gentle track under the canopy of beech trees that leads up to the small lake was a breeze and we looked forward to a picturesque camp in this natural rock amphitheatre. An orange tent greeted us as we approached the lake, then another, then several more as it soon became apparent that we had reached Tent City at Bulmer Lake. Of course, it clicked straight away that our ‘road less trodden’ passed above some of the finest cave systems in the land and our trip coincided with an annual caving camp. 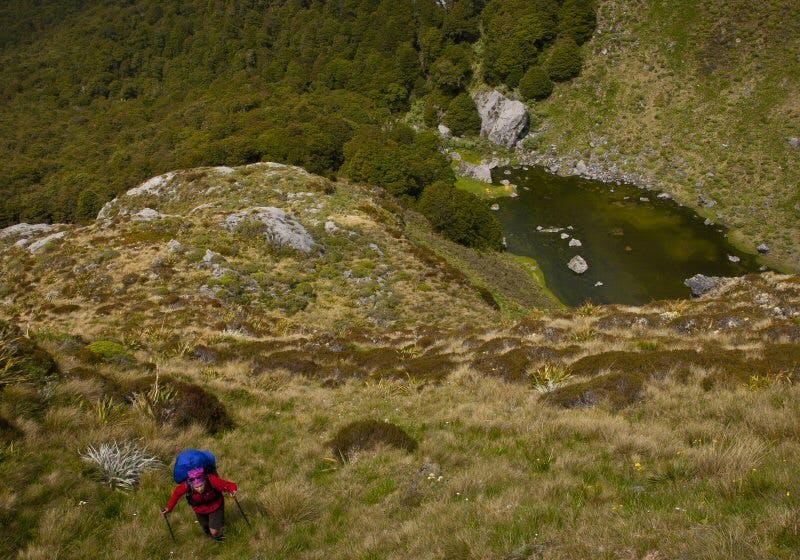 At this juncture the wind increased, while light drizzle of the afternoon decided to behave most unseasonably and turn into driving sleet, with the added bonus that all level camping spots were already taken. Furthermore, my companion is no lover of wet boots and after a morning spent wading the rivers and creeks below, they were thoroughly soaked and rapidly numbing her feet and toes. I am asked about my perverse choice of route on a mountain that consists entirely of porous limestone and therefore has very little surface water, yet we somehow managed to spend half the day wading through water.

The army of resident cavers did their best to accommodate us among their city of tents and fortunately ours was small enough to squeeze between a couple of large rocks. Life improves manyfold once ensconced in a cosy sleeping bag with a cup of hot soup in hand, even if the sleet was by now threatening to turn to snow.

The adventures of the day were not entirely over. Later that evening, I set off to find the cavers’ purpose-built toilet which had been kindly offered to us. Somehow I took the wrong trail – there are many leading up to cave entrances in these parts – and it was sometime later that I stumbled across one of the cavers in the pitch black and disorientating forest. Inadequately clad in undersized pink ‘crocs’ (not mine, honestly), must have reinforced speleological opinion that those who prefer to remain above ground are a strange bunch indeed.

Morning, the last one of the year, and I began to understand the appeal of scurrying underground instead of braving the stiff sou’westers that continued to sweep over the elusive mountain above. But by late morning things had improved and the day looked promising enough to set off for the top of the mountain. The weather-beaten karst of Mt Owen offers perfect grip for hopping over rock crevasses, climbing easy-angled slabs, as well as endless opportunities to stray ‘off-route’ and clamber over a particularly interesting chunk of limestone; this landscape is never dull.

Castle Basin provided the last guaranteed supply of water, along with fine clusters of the yellow mountain buttercup that grows in sheltered nooks and crannies among the many rock outcrops.

As the day progressed, so did the clouds from the south which threatened to smother our proposed summit campsite in cold, all enveloping clag.

We arrived at the top of the peak with barely a couple of minutes to enjoy the ‘view’ at the same time as a solitary mountain runner who’d just ‘jogged up from Courthouse Flat’ in the afternoon. As a grey pall of cloud descended abruptly over the summit plateau, the unanimous decision was to bail to the comfort of Granity Pass Hut; even a crowded hut is a better option when the weather turns nasty.

New Years Eve, but the purists were all abed before 10 and we felt slightly guilty downing our ‘wee dram’. Even this failed to be sufficiently soporific to drown out the snores of the uber-fit runner, dispelling the myth that it’s the overweight and unfit that snore.

The first day of the year dawned bright and promising, the slight glitches in our plans being that a) we were not camped on top of Mt Owen as planned, b) our car was in the Owen Valley on the south side of the massif and c) we were on the north side of the range. Studying the map over a leisurely breakfast revealed a possible route back that didn’t involve either the long and forested Fyffe River or a long and risky hitchhike back to our car from Courthouse Flat. 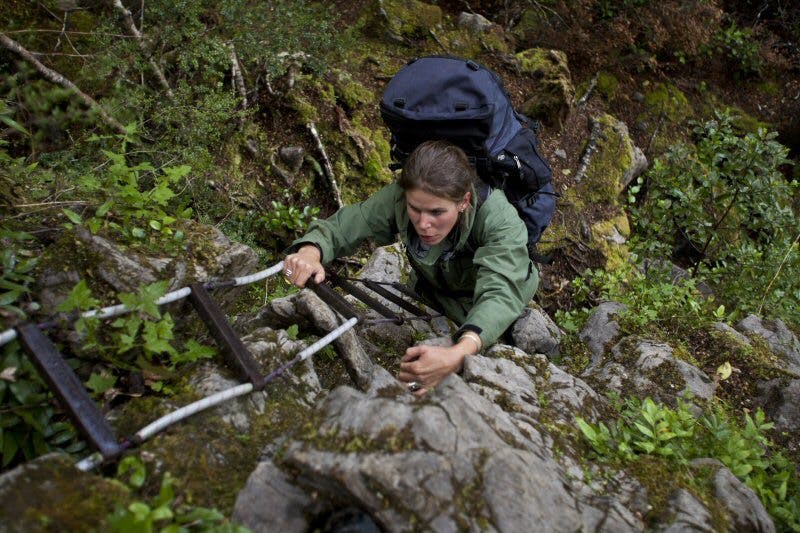 The Lookout Range runs immediately to the east of the Owen Plateau, and offers seemingly straightforward travel along the tops before an abrupt descent back to the Owen River car park. Glossing through the book at Granity Pass Hut this seemed to be the road less travelled, as I couldn’t find any reference to any parties heading along this range. The days were long and new territory is always enticing, so we set off over scrub-covered Granity Pass and along the eroded slip face above the headwaters of Granity River. Here, the route is quite vague, as several deep guts cut into the steep slopes that run down from limestone bluffs overhead, but occasional old permolat markers and the odd mossy cairn brought us out to the broad saddle between the Owen and Granity rivers.

Once above the bushline, the panorama opened dramatically and for the rest of the day we were treated to uninterrupted vistas across to the Owen Massif, while we struggled with the incessant cold, gusty sou’west wind that refused to abate.

The Lookout Range offers a stark contrast to the marble mountain to the west. These broad, undulating tops consist of frost-shattered, dazzling white granite screes with occasional weathered tors decorating the smooth ridgelines. We made what seemed to be good progress, despite the energy-draining cold wind, but the Lookout Range didn’t give up easily. The ups and downs were never more than 200m but the new day of the New Year wore on and it was late afternoon before I started looking for a way off the windswept ridge into the forested valley sides below.

I am always happier above the bush line, so it was with a degree of trepidation that I plunged off the open ridge and straight into stunted and twisted dwarf beech, vainly trying to keep to a preset bearing that looked so easy on the map while in the sunshine above. The scrubby forest soon gave way to mature stands of beech, with an almost bearable amount of undergrowth to bash through and we even started to enjoy the rapid downhill progress we were making. Nevertheless, there was more than 800m of this to cope with before reaching the farm track, and inevitably we were lured into deep little creeks that appeared out of nowhere on this endlessly steep sided ridge.

Not long before our efforts were overtaken by darkness, we were abruptly ejected from the forest’s grip onto open grassland, with bemused sheep eyeing us warily as we cooled off burning feet in a nearby creek. The Owen River Pub was beckoning after nearly 12 hours on the go, and although the kitchen had closed by the time we arrived, the understanding owners soon rustled up a fine meal, eaten with the returned rain hammering down outside.