We have a new Conservation Minister 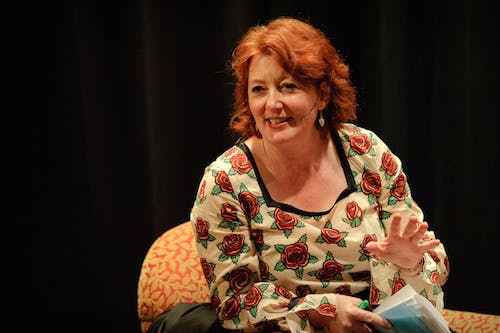 One time news journalist and gardening show presenter Maggie Barry has been appointed the new Minister of Conservation.

The 55-year-old replaces Nick Smith, who was moved to Environment in the post-election cabinet reshuffle.

Barry was only elected to parliament in 2011 but chaired the Bluegreens Caucus – the National Party’s advisory group on conservation – during her first term.

She began her broadcasting career in 1986 on National Radio before moving to TV2. But she’s best known for her gardening show, originally Palmers Garden Show, later named Maggie’s Garden Show, which she presented from 1991 to 2003.

As well as Conservation, Barry will also hold ministerial posts for Arts, Culture and Heritage, and Senior Citizens.

The reaction to Barry’s appointment hasn’t been hugely enthusiastic on Wilderness’ Facebook page. Gareth Rapley said: “Three portfolios. With 60 MPs, this shows how important conservation is to the National Government and why ‘blue-greens’ have no idea.”

While Peter McKellar said: “We might get some nice gardens in national parks now.” 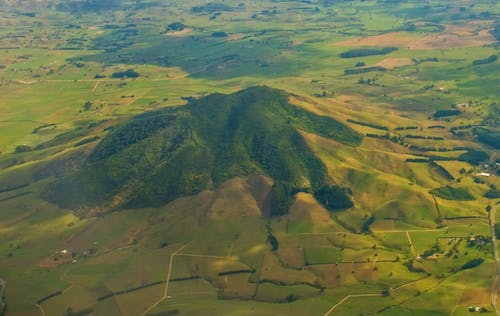 Trampers and bikers can enjoy first rate access up one of Waikato’s most picturesque volcanoes thanks to a three-year volunteer effort.

More than 100 volunteers joined Te Kopua Iwi to build a track to the top of 449m Kakepuku, south of Hamilton.

Prior to the effort, a rough track existed but it was steep and slippery. The new track not only makes the climb and descent easier, but steps and boardwalks help protect the mountain from becoming damaged.

The summit gives views of the surrounding landscape, including the neighbouring summit of Pirongia. Mountain bikers can also use the track but will have to walk the final stretch to the summit, as the ride-able section doesn’t quite reach the top.

The hill has its fair share of native and regenerating forest, and extensive predator control there means the Kakepuku Mountain Conservation Project has been able to reintroduce the North Island robin and the NZ falcon in recent years.

Kakepuku is home to four pa sites. It’s located between Otorohanga and Te Awamutu of SH3 and a return walk to the summit is between two and three hours.

DOC is looking for funders to help build a track it says could complement the Tongariro Alpine Crossing.

The Pouakai Crossing would offer similarly spectacular views, but instead of Red Crater and Mt Ngauruhoe, visitors would get prime views of Mt Taranaki.

The route would follow existing tracks from North Egmont Visitor Centre to the summit of Pouakai, 1400m, at which point, one plan is to build a 5.3km track down to Pukeiti rhododendron park, where there are facilities to support such a trail.

In order to achieve this, the department would need a partner who could supply, at the latest estimate, around $400,000 to build the track and around $23,000 a year to maintain it.

DOC’s partnerships manager in Taranaki, Darryn Ratana, said it’s very early days: “We’re only at the investigation stage at the moment. There are 300km of track in the national park at the moment but these were built for animal control, not visitors, and we’re not taking full advantage of the mountain.

“Lots of people come to reach the summit of Mt Taranaki, but that’s really only a summer activity and it would be great to have something people could do in a day, year round.”

Ratana estimates it would take between six and nine hours to complete the crossing but it could easily be split into two days with trampers staying at either Pouakai Hut or Holly Hut, 3km off the track.

“We wouldn’t want this to rival the Tongariro Alpine Crossing,” said Ratana. “It would complement it. It would provide another option for those who have completed Tongariro.

“The Pouakai Crossing would provide a different experience, with alpine peaks and forest in the same package. The Akukawakawa swamp, an hour off the track, provides that classic shot of the mountain reflected off one of the lakes in the swamp.

“We wouldn’t want the numbers they get up in Tongariro but we’d want the experience to be world class.” 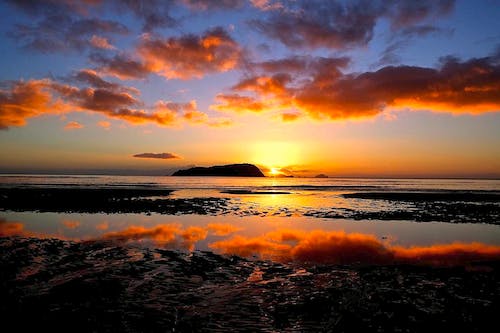 Volunteers are hard at work piecing together a walking and cycling trail along a popular stretch of the Coromandel Peninsula.

Locals hope to build a 25km track between the coastal towns of Pauanui and Tairua, heading inland following a green belt alongside the Tairua River.

The Hikuai District Trust consists of volunteers who have put their hand up to help build the trail. So far, the trust has received $150,000 and Gary Fowler, who’s leading the fundraising and construction with his wife Anne, said it’s an important community project.

“From our house I look down on the Tairua River and see hundreds of cyclists heading up and down the narrow road next to it,” he said. “It’s very dangerous.

“During the summer time these towns swell to nearly 20,000 people, a lot of whom are out there doing stuff.”

One of the real challenges is getting consent to build on the various stretches of land. There’s also the matter of another $80,000 needed to build around a pa site, so the trail doesn’t damage the historic landmark.

But progress is being made – the group hopes to have finished the 5km section from Pauanui to Duck Creek by Christmas – and Fowler says it will be a great community resource.

“The views are beautiful. A lot of the harbour is very sheltered and you can see reflections of trees and hills. There are lots of fern birds nesting in area and there’s a programme in place to protect them.

“It’s mostly older people volunteering but we have a range of skills, people are really happy to get involved and local businesses are really helping.”

Have you seen this plant? 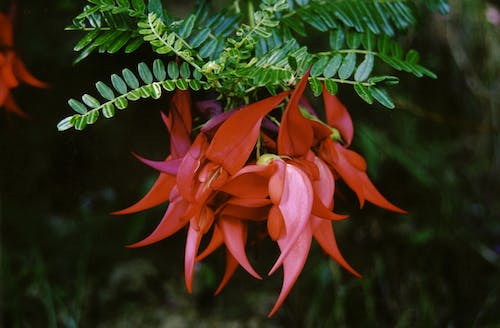 The curved red flowers of kakabeak

Trampers are being urged to keep an eye out for an extremely rare plant which shows off striking red flowers in spring.

Kakabeak is native to New Zealand but is being destroyed by the likes of goats, deer and rabbits. There is now only 120 naturally seeded plants that are known to exist in the wild.

DOC wants to know if there are more and trampers can help save the species by keeping their eyes peeled this season.

Kakabeak has bunches of large, curved red flowers and tends to cling to cliffs and bluffs. This is the best time of the year to see them and a recent trip to Hawke’s Bay uncovered 18 wild plants previously not known to exist.

Forest Lifeforce Restoration Trust helps to sustain flora and fauna in New Zealand’s forest. “We’re asking anyone who sees a plant – and they’re pretty unmistakable – to make a note of the location,” said the trusts forest manager Pete Shaw, “preferably using a GPS reader for the most accurate co-ordinates, and to let us have this information as soon as they get back to civilisation.”

DOC’s kakabeak recovery group leader, Don McLean, added that the information is vital to the future survival of the species in the wild. “Once we know where these plants are, we can actively manage them to help them thrive in the wild, either by protecting them from goats and other pests, weeding out plants that smother kakabeak seedlings or thinning out the canopy so they have the right light.”

If you think you’ve spotted kakabeak in the wild, report it to the nearest DOC office. 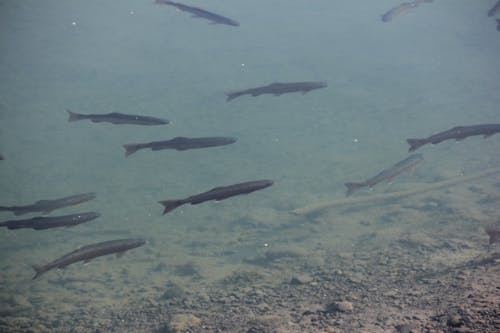 Anglers have been left confused by conflicting claims from two authorities.

Fish & Game NZ said that DOC has advised not to eat trout in areas where 1080 pest control has taken place.

The organisation made the claim in a press release after preliminary results from trials where trout were force-fed the poison.

However, DOC is adamant it has never advised people not to eat trout and that the preliminary results suggest several tonnes of trout flesh would need to be eaten in one serving to give a 50 per cent chance of a fatal dose.

The research was carried out because of fears wild trout would eat contaminated mice, thus becoming contaminated themselves.

In its own press release, three days after Fish & Game’s release, the department said trout took up low levels of 1080 but this broke down over a few days and the fish showed no ill effects.

But Fish & Game continued its ‘catch and release’ advice, insisting it was initially advised by DOC to advise anglers not to eat trout in pest control areas. “It would be irresponsible for us to tell anglers it’s okay to eat the fish, only to see someone becoming ill,” said the organisation’s Andrew Currie.

DOC’s Reuben Williams said: “The fish in the lab were fed higher doses of the toxin than they would ever likely receive in the wild, yet the levels in the flesh were not nearly high enough to be a risk to human health.” 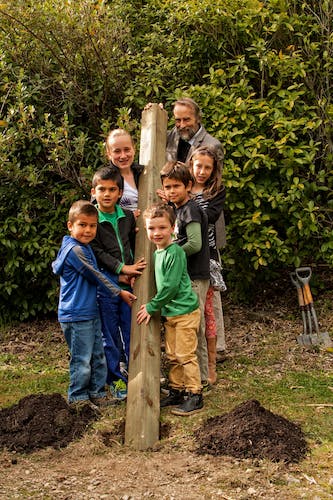 BWST Chair, Dave Butler, Works with the next generation to install the first post in the pest-proof fence. Photo: Diana Hambleton

After ten years of hard work and fund raising, work has finally begun on building the predator-proof fence around the Brook Waimarama Sanctuary.

The sanctuary, in the Brook Valley, on the outskirts of Nelson, now has $4.2m to build a 14km long fence, enclosing 700ha of native forest.

It will be the second biggest fully-fenced enclosure in New Zealand, behind Maungatautari, Waikato, and it will take 18 months for the fence to be completed.

The total fundraising target is $4.7m as, once the fence is complete, more money is required to eradicate pests from the park.

General manager Hudson Dodd said so many people are set to benefit from the project. “The majority of the Brook Valley was never cleared, never logged,” he said.

“The fact that the Brook’s eco-system is relatively robust and pristine means it has remnant populations of birds and reptiles already gone from most other places, such as breeding pairs of riflemen and NZ falcon and sightings of kakariki.”

Dodd explained that once the fence is built and the pests eradicated, these populations will explode. The group will then re-introduce species such as tuatara, mohua/yellowhead, kaka and kiwi.

“The birds will follow the green fingers of land down into the communities and into people’s gardens and lives,” said Dodd. “It’s just a core of a much bigger area that includes human habitation. Regardless of whether they visit, people will experience the effect of the sanctuary.”

The Brook Waimarama Sanctuary Trust is still looking for people, organisations and businesses to sponsor fence posts. You can sponsor a fence post for as little as $100. Visit brooksanctuary.org to find out how.