Mid-January at the peak of a South Island summer, what a perfect time to walk the Milford Track. When my son Greg, his wife Rochelle, and I booked the Milford in August 2020, we were aware that January was the wettest month of the year in this remote corner of New Zealand. We were even looking forward to a bit of rain to see Fiordland at its best.

We certainly got that – and a lot more – on our five-day walk.

A light drizzle greeted us at Glade Wharf at the northern end of Lake Te Anau. By the time we reached Clinton Hut, after about an hour, it had settled into light rain.

At the evening hut talk, warden Ross Harraway (of Harraway rolled oats fame), forewarned us of dicey weather ahead. Harraway is an institution on the Milford Track having been a hut warden for about 17 years. He is very tall, 77 years young with a wicked sense of humour. In his hut talk, his advice to snorers was if you think you are going to be “chopping wood in the corner” do the right thing and move to the main room under a table where you won’t cause further disruption.

That night, while checking the hut bookings, he was approached by the leader of a group who said one of their party (who had an alarming tendency to “do his own thing”), had not shown up yet. Harraway was not overly concerned, explaining that if he wanted a warm, dry hut with a mattress to sleep on, he knew where it was. The missing man eventually turned up at 7.45pm, in the pouring rain, much to everyone’s relief.

He would later feature in another episode at Mintaro Hut.

The rain had set in the next day as we set off for Mintaro Hut. Hundreds of waterfalls were tumbling down the near-vertical mountainsides. Mist hung in the valleys like depictions of a Tim Wilson painting. Awesome, we thought, was the sheer scale and grandeur.

After arriving at the hut, the hail started and got heavier and heavier and the snow levels on the surrounding mountains crept lower and lower. At that evening’s hut talk, Simone, the hut warden, said next day’s forecast was for high winds with snow expected on Mackinnon Pass. There was even a possibility the track would be closed and we would be forced to stay another night. Nevertheless, the following morning the 40 of us optimistically packed up and were ready by 7am when Simone came in with the news that nobody wanted to hear: “Sorry folks, hunker down, you’re here for another night”.

Disappointment soon turned to discussions: whether to go on (if the track was open) or whether to go back to Glade Wharf and leave the track on the planned exit day. A minority decided to go on – just 10 of us.

Staying on the track required plans to be changed and some rationing of food to spread four days of meals over five. There’s a saying that  a watched kettle never boils and equally a bag of food you’re not supposed to touch seems all the more appealing with very little to distract you and with freezing temperatures outside. So the first thing to do was figure out how to busy ourselves while keeping warm.

My daughter-in-law Rochelle is a fitness instructor and she quickly gathered up a group for a yoga and fitness class on the deck. That was certainly a surreal experience to be doing star jumps just metres from the mounting piles of hail and with waterfalls all around us. It also proved a distraction from thinking about the avalanche threat we had been warned of or how long we were going to be at Mintaro or how we were going to get out if rising river levels, snow or wind kept us hut bound. 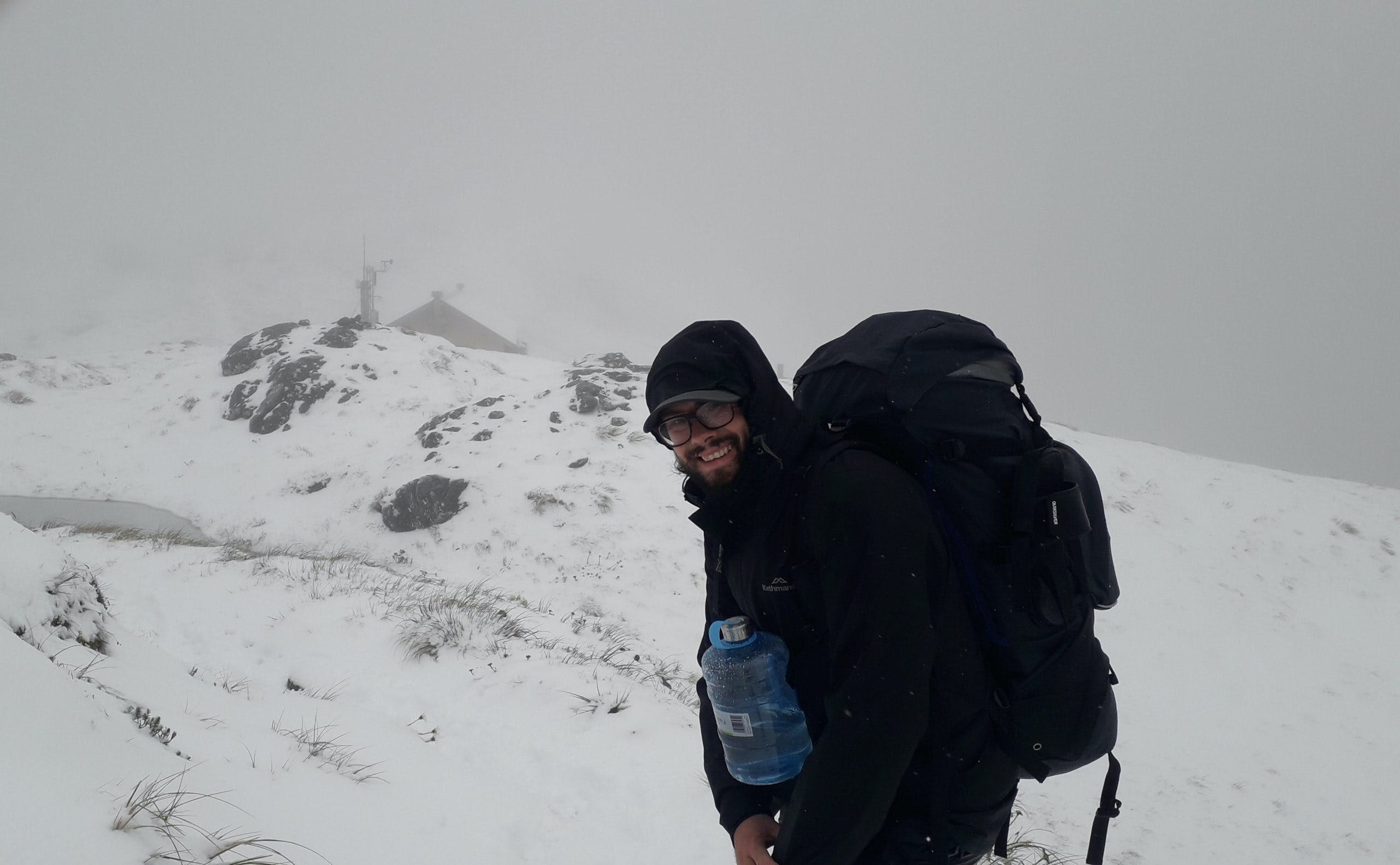 Later that day, the quiet chatter in the hut was interrupted by cheering and clapping when the guy who likes to ‘do his own thing’ was seen escaping from the hut for a mid-hail run… minus his shirt. Shirtless Man, as we named him, had developed a bad case of cabin fever that had finally got the better of him.

We also gave in to temptation and took a brief walk (fully dressed of course), in the hail, thunder and lightning, to the hut helipad which had majestic views of hundreds of waterfalls pouring down Fiordland’s towering mountains. It was spectacular.

Other than press-ups, downward dogs and mid-storm excursions, it was cards and then the surprise batch of hot scones that Simone whisked up for afternoon tea. They were devoured in seconds, and for some doubled as lunch.

A final highlight was an impromptu hut quiz night which Simone organised, complete with prizes – first prize being a packet of biscuits and second prize, three oranges to be split among the winning teams – no doubt a personal contribution of hers to lift our spirits.

It was to raucous applause that Simone announced that the track was open the next morning. Thirty trampers headed back with a degree of disappointment but for us, we were on our way over Mackinnon Pass to Dumpling Hut.

Soon after leaving Mintaro, we were in snow which got deeper and the weather got colder as we climbed to the pass. The conditions were freezing with light snow falling and the tarns at the pass, frozen solid. We had coffee and a bite at Mackinnon Shelter, then, it was down to Dumpling Hut. Diverted down the emergency route to avoid potential avalanche danger, it was a relief to have solid rock underfoot after ploughing through snow for several hours.

There was plenty of space to spread out in the 40-bunk Dumpling Hut, but we all huddled around the fireplace in a desperate attempt to warm our bones and dry our clothes.

Julz, the hut warden, warned that the weather was still not looking good and, with the final part of the track prone to flooding, we may need to stay another night. This was not exciting news as we had devoured the last of our food and didn’t relish another unexpected night in the bush.

By morning though, the weather had improved and we were on our way. The final day revealed impressive snow-capped mountains, blue skies and expansive views of Lake Ada before we reached Sandfly Point and jumped aboard a ferry to Milford Sound.

Reflections: the Milford Track is truly a Great Walk and it’s thoroughly recommended. Our top tip: even in January, it might be cold. And remember to always wear a shirt.