A colossal rock avalanche on the south face of Aoraki/Mt Cook has altered the shape of the mountain and knocked Gardiner Hut from its foundations.

The huge slip – up to 1,000,000m3 – registered on the national seismograph network station at Fox Glacier, 26km away, as equivalent to a magnitude 2.6 earthquake.

The avalanche dropped 1600m and covered 3.9km – reaching 1km down the Hooker Glacier – smothering Gardiner Hut and knocking it off its foundations.

Dramatic photos show it lying half buried in the debris yet largely in its original shape; testimony, say GNS Science, to its location and design.

No one was in the hut at the time but had there been, it’s probably they would have survived the impact. But had they chosen that moment to answer a call of nature they would have fared far worse – the outside toilet was completely destroyed.

DOC has closed Gardiner Hut but its long term future won’t be decided until the summer, when snow melt will allow a thorough inspection of the building and foundations.

The department is advising people to stay away from the area: “Climbers are advised to keep out of the Noeline Glacier region of the upper Hooker Valley area while the avalanche area stabilises,” said DOC’s conservation services manager at Aoraki/Mt Cook, Mike Davies. “There will be a period of heightened risk, both from local rock fall and debris flows, as well as potentially involving further collapse from the source area.” 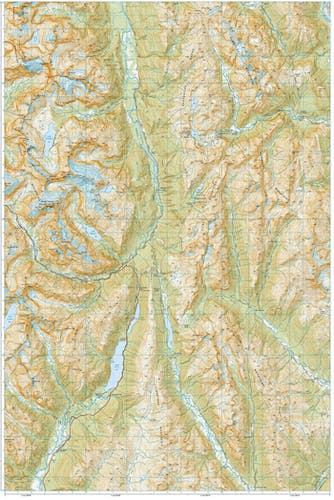 Ever wondered which are the best selling Topo50 maps? We have, so we asked LINZ to provide its definitive list.

And it appears us trampers use these maps more than anyone else, as each of the top 10 has at least one classic walk or tramping destination.

The top five are all from the South Island and four of the top 10 feature part of Otago.

Interestingly, very few of the Great Walks feature in the best sellers – just the Routeburn and part of the Tongariro Northern Circuit.

So here’s the list of maps, along with some of their key features and tracks:

CB09 Hollyford: Routeburn Track and part of the Greenstone and Caples tracks

CB10 Glenorchy: Earnslaw Burn and the start of Greenstone, Caples and Rees tracks

BJ34 Mount Ruapehu: Ruapehu, part of the Round the Mountain Track and Whakapapa

No new roads for foresters 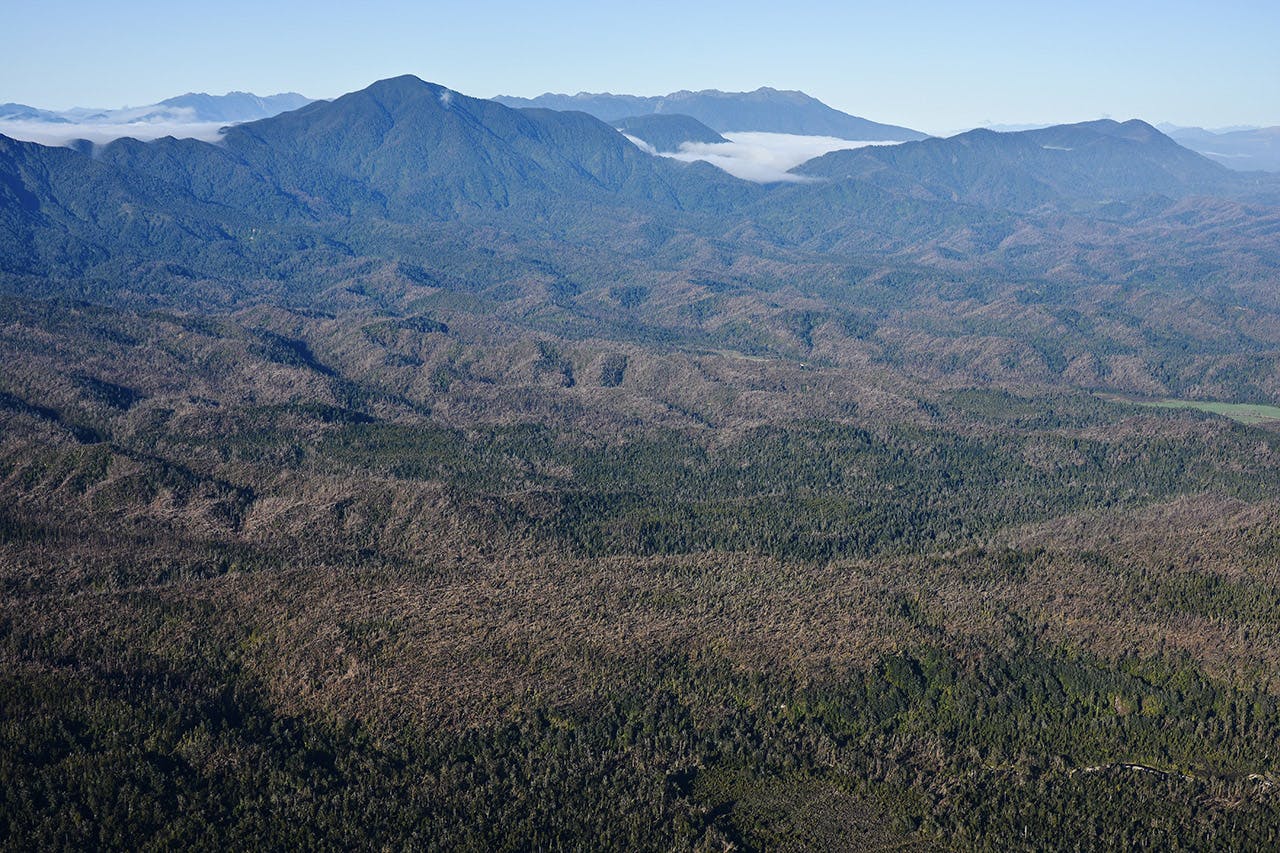 Cyclone Ita brought down thousands of trees on the West Coast. Photo: DOC

West Coast millers and foresters will not be allowed to build any new roads to retrieve wood from the extensive windfall damage in the region. Virtually all the wood will have to be collected by helicopter.

Huge swathes of forest were devastated by Cyclone Ita earlier this year and the Government has pushed through a bill allowing this wood to be collected for commercial purposes.

DOC says it is being careful to ensure environmental impact is kept to a minimum. In a meeting with foresters, the department laid down the rules to which they would have to abide.

One of those rules is that at least half the fallen wood in any area must be left to decompose naturally. Another is that any wood collected without using a helicopter will be monitored on a case by case basis – loggers will need to submit a plan for each tree.

Foresters are delighted with the new bill. Jon Dronfield, of NZ Sustainable Forest Products, says DOC has reacted well to this freak natural event. “The fact that this proposal is supported and driven from within the department indicates not only a strong awareness of local conditions, but an increasing ability to promote partnerships with local business to investigate fresh thinking on self-funding of the conservation estate,” he said.

Dronfield estimated that less than half a per cent of fallen logs will be utilised in the five years DOC has given foresters to retrieve the wood.

Andy Grigg has been sustainably milling on a small scale for several decades. He said the rewards are worth the effort: “The royalties are reasonable – you can get up to $10,000 for a rimu tree – and it’ll pay for all the care and attention we need to give.”

Grigg said he can’t afford to use helicopters to start with, but is prepared to use any sustainable method to remove wood, including using ground winches, ponies, track carriers or even by floating logs down rivers.

Environmental group Forest and Bird said the rotting timber should be left to decompose naturally “for the benefit of native wildlife, and the forest itself”. 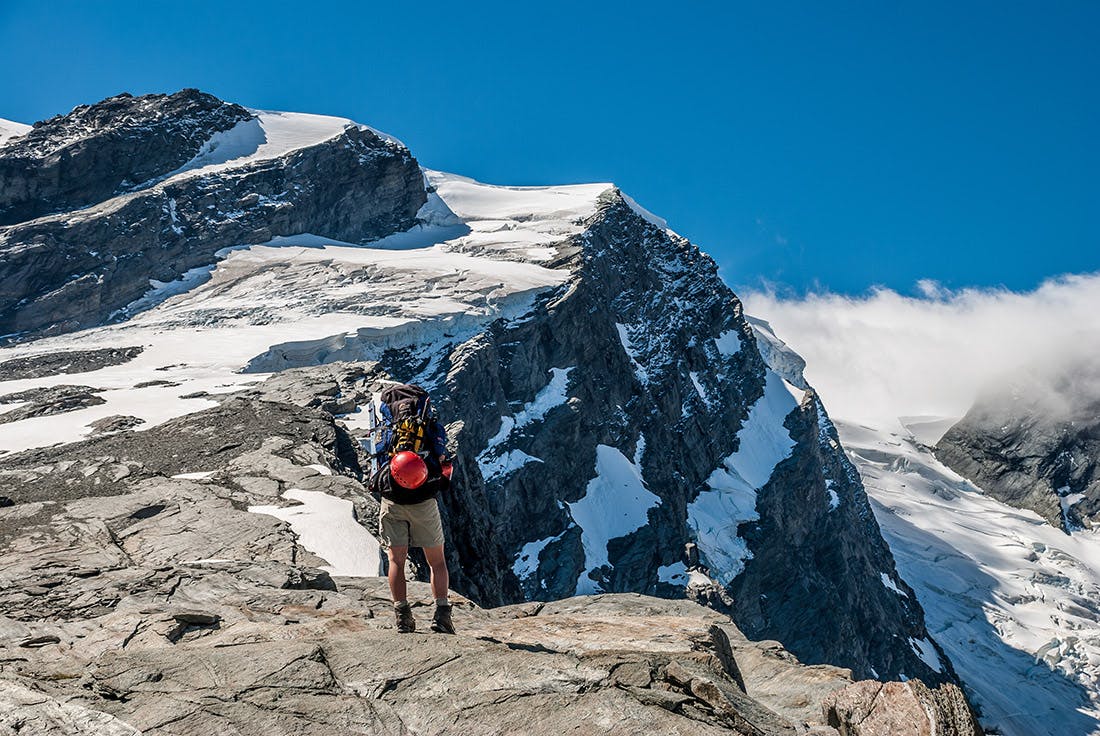 Quarterdeck Pass has long been marked incorrectly on maps as the snow ramp to the left, when it should have been the ramp in the centre of the photo. Photo: Danilo Hegg

Quarterdeck Pass has not only an interesting story behind its naming, but its location has long been incorrectly marked.

The pass was named in 1911 by Bernard Head, who in November 1909 became the first person to climb Mt Aspiring/Tititea. A quarterdeck is part of a sailing ship reserved for the ranking officer on deck to use for pacing and thinking in private, away from the more crowded areas of the ship. Head was on a return trip to the area, after his successful first ascent of Aspiring, when he named the pass Quarterdeck because he spent 15 minutes pacing it in a bid to warm his feet.

But the history of Quarterdeck Pass is still being written today, in large part due to the tenacity of Whitney Thurlow, chief guide at Aspiring Guides. In July this year, Thurlow phoned Wilderness, complaining that the pass was incorrectly located on topo maps. He was concerned because the pass, as shown, could lead people coming off the Bonar Glacier over deadly bluffs. His previous enquiries to Land Information New Zealand over the years had fallen on deaf ears.

Wilderness took up the baton and also queried the Geographic Board about the location of Quarterdeck Pass, which is marked on maps 250m to the north-east of the actual pass, between Mt French and Pt2306 (in 1938, the pass had been first positioned on maps between Mt Joffre and Mt French, more than 1km away from the real pass).

The combined interest of Thurlow and Wilderness prompted action, and the NZGB has confirmed the pass is indeed incorrectly located on topo maps. An updated print version of the relevant map – Topo50 CA11 – should be available this September.

– Special thanks to Whitney Thurlow and the NZ Geographic Board for assisting with this article. 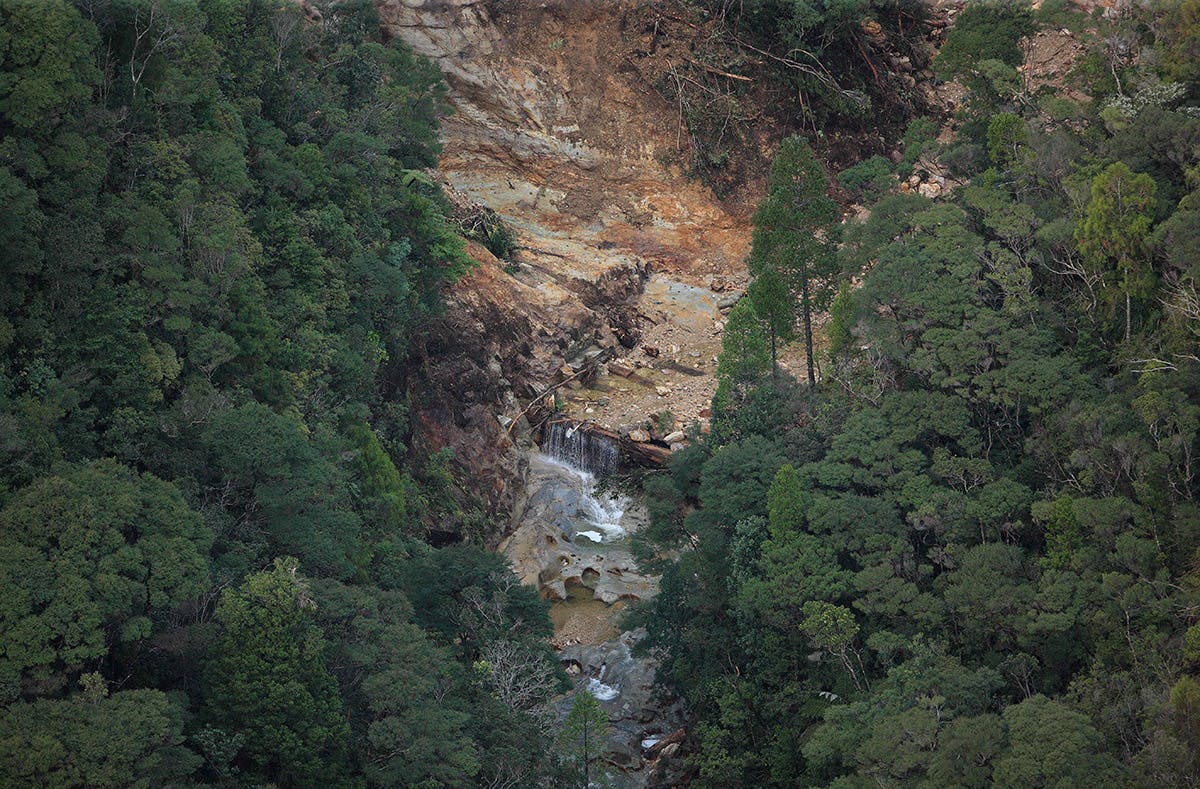 Great Barrier Island and the Coromandel Peninsula are two of the popular tramping spots damaged by storms that hit the region in July.

The most significant damage was to the 110-year-old, 40m-high Kaiaraara kauri dam on Great Barrier Island. It was the biggest kauri dam in New Zealand and was completely destoryed by the severity of the winds and heavy rain which caused a landslip behind the dam. Tracks have also been closed, as were campsites and both huts.

Mt Heale Hut is due to be open by September but Kaiaraara Hut, which had its toilets washed away, could remain closed until the Christmas holidays, so this could seriously affect plans of those who have booked ahead.

DOC has not ruled out rebuilding the dam, but is focussing on the huts and tracks.

Some of the best tramping in the Coromandel has also been affected. Those heading to The Pinnacles face an extra hour or two, if tramping in wet weather, after a large slip at the Hotoritori campsite, 3km up-valley from the visitor centre, blocked Kauaeranga Valley Road for several days.

A walker-only track opened shortly afterwards and now there’s a one-lane road allowing cars to the car park at the end of the road.

But DOC says it’ll close the road to vehicles in wet conditions, due to the risk of a further slip. This will add 6km to any walk up the Kauaeranga Valley, including to Pinnacles and Crosbies huts. At the time of writing, the department could not say how long it would be before the slip was cleared for both lanes to open again. 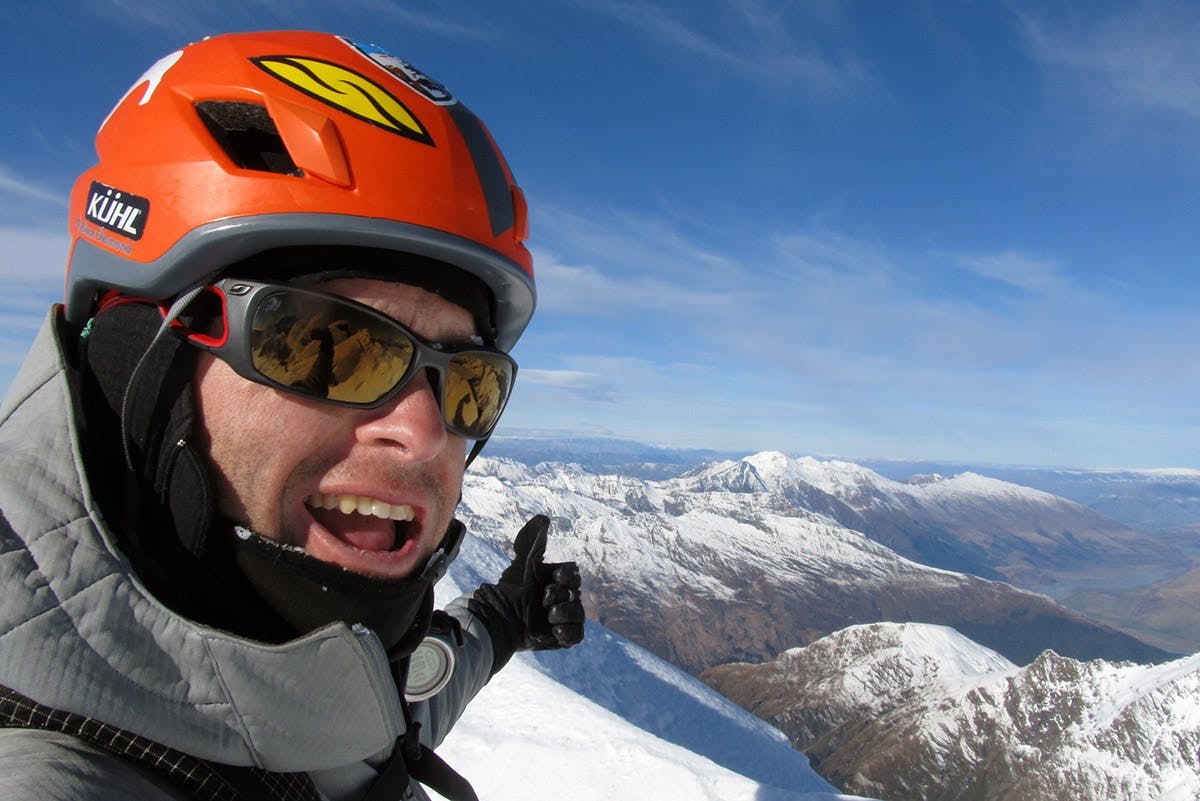 Guy McKinnon on the summit of Popes Nose. Photo: Supplied

Guy McKinnon has completed the long-awaited second winter ascent of the east face of Popes Nose (2700m), near Mt Aspiring.
Without the aid of helicopter transport to reach the base of the climb, it took McKinnon five days to walk in, climb the route and walk back out. The actual climb itself took five hours and was completed on July 18.

“The unfolding of this attempt was long and arduous beyond words and required mental effort and determination in excess of anything previously required of me by alpinism,” McKinnon said in a statement released by the New Zealand Alpine Club.

From the peak, McKinnon descended to the Upper Volta Glacier, intending to complete an ‘integral’ ascent of the north-east face of Mt Aspiring. That climb was thwarted by poor ice conditions and he sought shelter at French Ridge Hut – crossing the Bonar Glacier in gale-force winds and a white-out.

“I think many will agree that, in terms of difficulty of achievement, Guy’s five days of full-on adventure alpine climbing is unparalleled,” Brown said.

Brown said the difficulty of the unaided climb is what makes it stand out among other historically important climbs, such as the first ascent of Aoraki/MtCook, the first ascent of the Caroline Face and even McKinnon’s winter ascent of the west face of Tutoko last year. “I’m not sure any other alpine feat tops this climb on the scales of difficulty, commitment, boldness, endurance and style combined,” Brown said.

McKinnon’s ascent was markedly different to the first ascent of Popes Nose. In that instance, a team of four climbers flew in to the base of the east face, bivvied en-route, and flew out from the summit.

Brown said that original ascent had “stood as a benchmark for difficult winter alpinism in this country for 24 years”.

Nick Cradock, a Wanaka-based IFMGA Guide was on that first ascent and described this latest ascent as “one of the best and most important accomplishments in New Zealand mountaineering history”.

“[It’s on] par with the first ascent of Zurbriggen Ridge on Aoraki/Mt Cook, Tom Fyfe’s first ascent of Malte Brun, and Bill McLeod’s solo of the Yankee Kiwi Couloir on Mt Hicks.”