It’s been a hugely successful summer for kakapo, who have been friskier than ever before. Those at DOC observing the sex lives of these flightless parrots are delighted to have registered 21 mating females (at the time of writing).

This includes a Fiordland kakapo called Kuia, who has never bred before, but is hugely important for widening the gene pool; the majority of birds originate from Stewart Island and are closely related.

DOC predicts kakapo nests may number 15 by the end of the summer with 30-40 kakapo chicks; significant numbers considering the total population is just 125.

Lake Taylor a ‘storm in a teacup’ 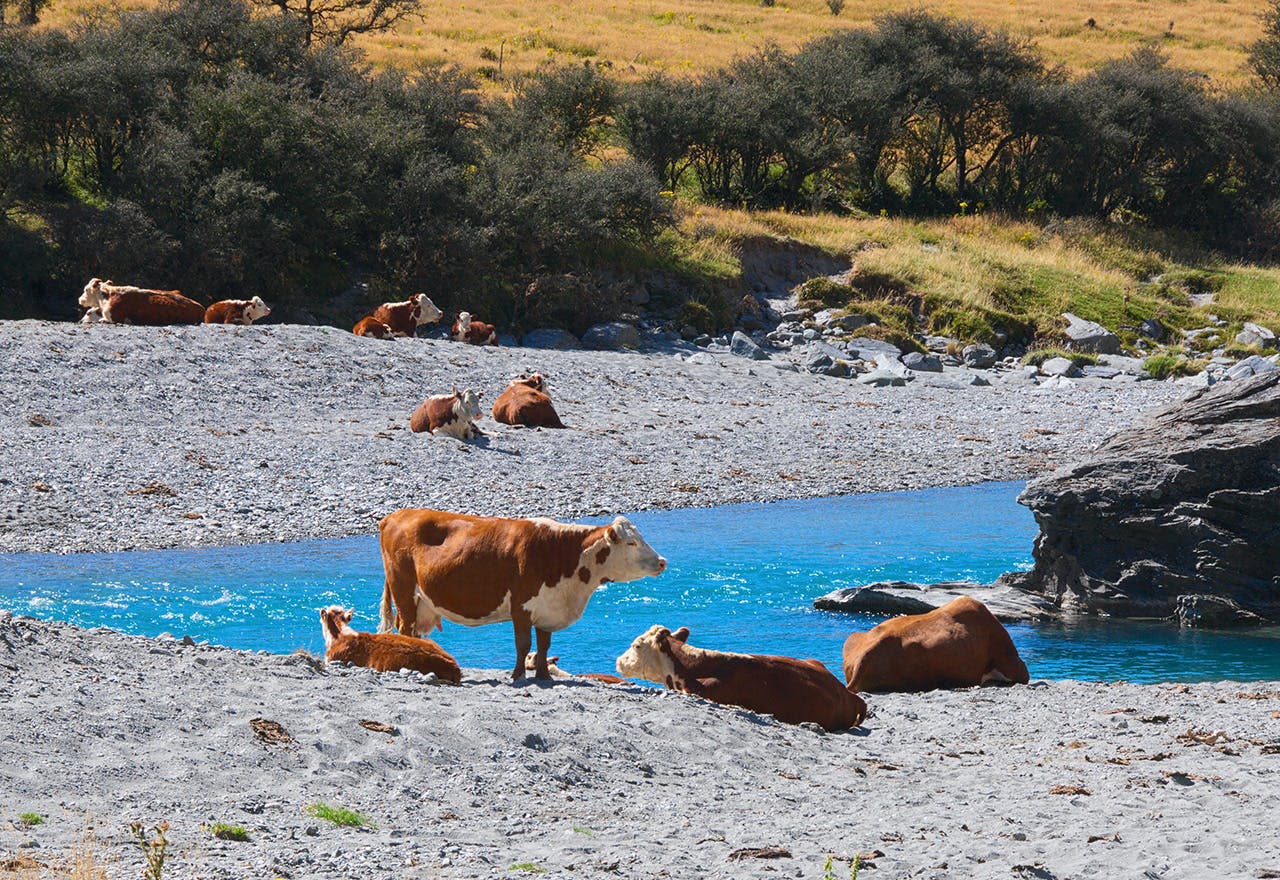 There are far greater threats to our waterways than this, says Mike Joy. Photo: Tomas Sobek

Public anger at images of cattle seen bathing in high country waterways should be directed at intensive farming in lowland regions, according to a leading waterways expert.

Mike Joy has for years been campaigning for cleaner rivers across the country, but described the impact of a small herd of cows going for a drink in Canterbury’s Lake Taylor as ‘minimal’.

“It’s nothing compared to the impact of intensive dairy farming in lowland rivers,” said Joy, who lectures at Massey University. “It’s just a visual thing and the reaction is indicative of people recognising there are problems with our rivers, but can’t see what’s causing them. When they see something obvious like this, it’s bound to get them fired up.

“But in comparison to the Waikato, which has a million cows in its catchment, it’s pretty small time.”

Visitors to Lake Taylor in January photographed cattle belonging to Chief Justice Dame Sian Elias and her husband Hugh Fletcher standing in the lake. Under Environment Canterbury’s Land and Water Regional Plan this isn’t allowed, and the authority appearing to turn a blind eye to the incident fuelled nationwide anger.

But Joy said regional councils turn a blind eye to huge amounts of pollution every day. “Most waste treatment plants fail in heavy rainfall and dump polluted untreated sewage into our waterways.

“But looking at the bigger picture, the reason the Lake Taylor incident got so much mileage is because people are now aware of the issues. It is unacceptable on any scale, but because there are so many problems with our waterways, there are far worse problems to worry about before worrying about this.” 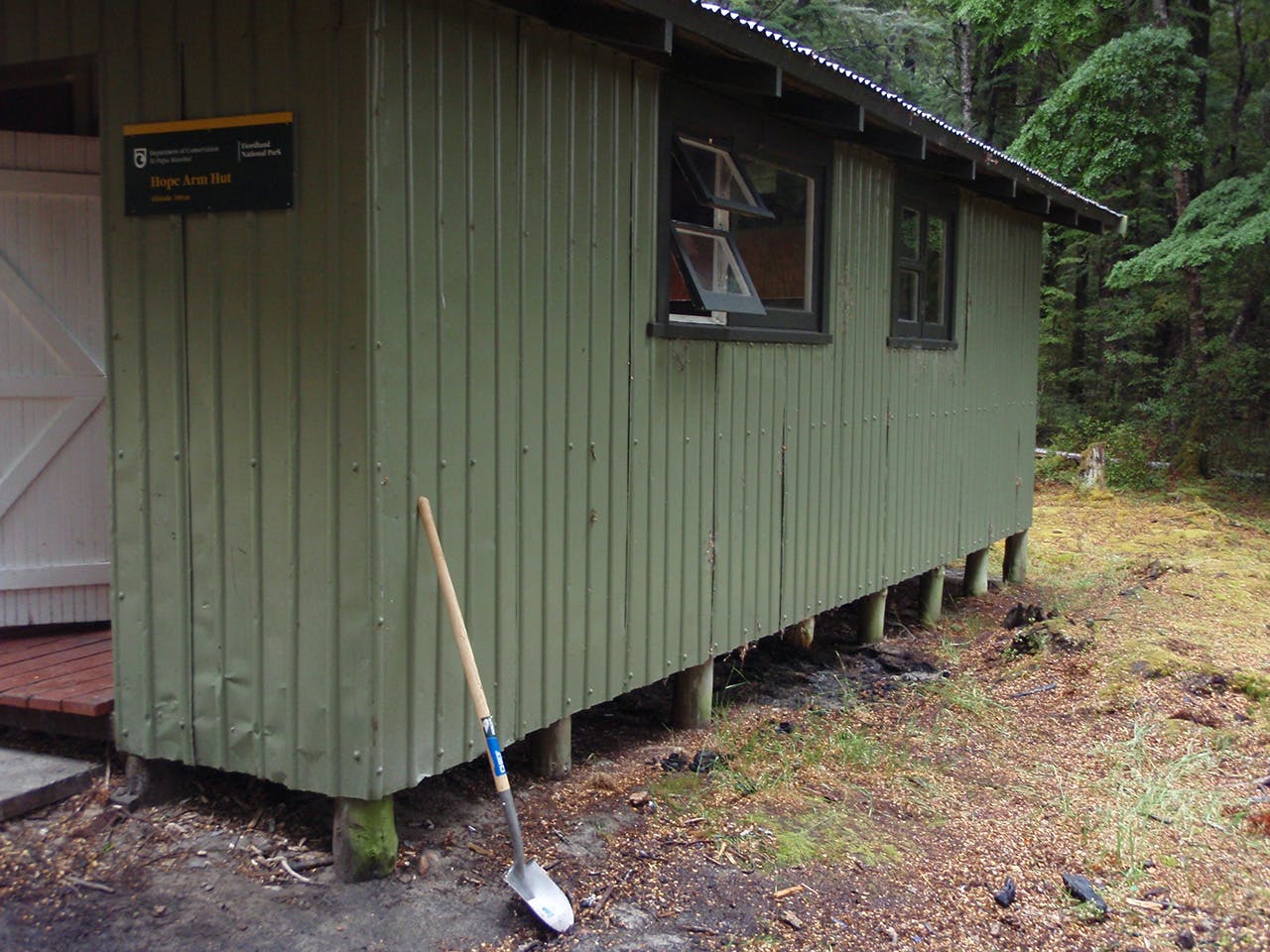 A hunter who awoke to discover he had unusually warm feet, raised the alarm that saved a backcountry hut burning to the ground.

The unsuspecting hunter was suffering the effects of a smouldering fire happening underneath Hope Arm Hut, on the shores of Lake Manapouri.

Three trampers who had stayed in the hut the night before had removed the ashes from the log burner and left them lying close to the hut without extinguishing them properly. The breeze blew the embers underneath which started to damage the hut.

Upon realising the situation, the hunter tried to douse the fire himself before heading to Manapouri to raise the alarm.

By the time DOC flew in the fire had destroyed two hut piles and the hut was sauna-like on the inside. But rangers saved the hut from being burned to the ground.

Thanks to the alert from the hunter and subsequent DOC response, the damage will cost $2000 to repair, rather than the far greater cost of replacing the hut. 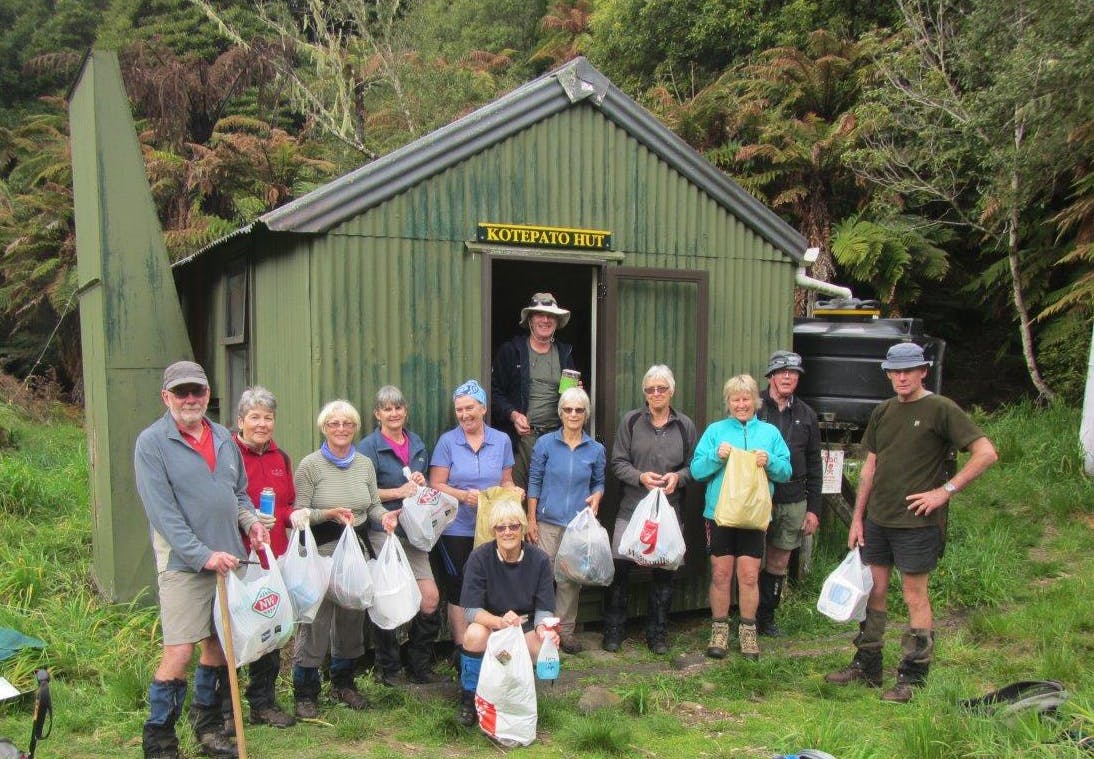 The team outside Kotepato Hut after the big clean-up. Photo: Supplied

Trampers have been hard at work spring cleaning, then sprucing up, a hut DOC had indicated would no longer receive maintenance.

Kotepato Hut, in Waioeka Conservation Area, Bay of Plenty, was at risk of being removed if no-one showed an interest in maintaining it.

Luckily, a keen group of trampers from Nga Tapuwae O Taneatua Tramping Club rolled up their sleeves and gave the hut a thorough clean-up, carrying out 12 bags of rubbish.

Just five months later they were back, along with materials helicoptered in and paid for by funding from the Community Conservation Partnership Fund.

They set to work building a covered deck at the front of the hut, a bench across one wall, a table, a bunk ladder and a step onto the deck.

Kotepato Hut has six bunks and you can stay there for $5 per night. The first section of track is through private land; owners are happy for you to walk through but require the make and rego of your car so give them a call on (07) 3157761.

Great news for Taupo’s residents and visitors – the track to the top of nearby Tauhara, 1088m, is open once more to the public.

The maunga offers glorious views across Lake Taupo to Central Plateau, but was closed in late 2014 after two acts of vandalism.

Trustees for Tauhara want to reintroduce native species and remove wilding pine from the maunga.

New Zealand will host this year’s Sustainable Summits Conference, where speakers and outdoor enthusiasts from across the globe will discuss human impact on our mountains.

It will be held from August 7-11 at The Hermitage Hotel, Aoraki/Mt Cook Village. For details, visit sustainable-summits.com

5 things we learnt this month