A huge three-month volunteer effort has seen the completion of one of the toughest stretches of The Old Ghost Road tramping and mountain bike trail.

Track builders have finished the gruelling 3.2km descent from Old Ghost Lake, featuring some of the track’s trickiest terrain.

A total of 5400 man hours were clocked up during the summer, with volunteers staying at Ghost Lake Hut.

All but around 15km of the 80km trail are now complete. The incomplete section is currently out-of-bounds to bikers but possible for experienced trampers who don’t mind a gruelling day’s bush bashing.

The Old Ghost Road is a community project to build a tramping and mountain bike track from Lyell to Seddonville in the West Coast Buller region.

The project is being led by the Mokihinui-Lyell Backcountry Trust. 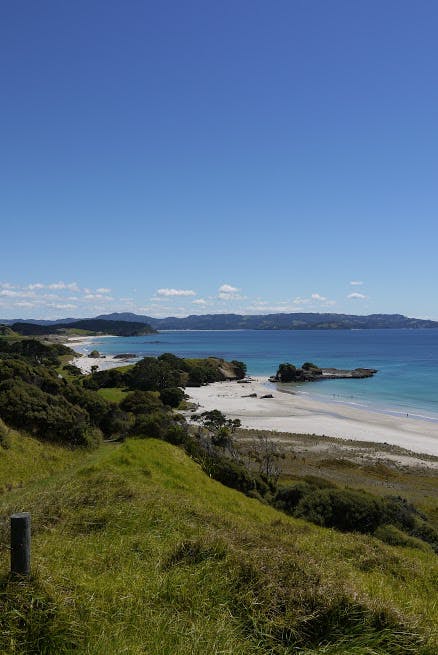 Auckland’s Tawharanuwi Regional Park will soon be home to takahe

Aucklanders will soon be able to see takahe on their doorstep, as the bird makes its home on the region’s mainland for the first time.

At least four pairs of the critically endangered species are due to arrive at Tawharanui Regional Park, north of the city, in September.

Steve Palmer is chairman for the Tawharanui Open Sanctuary Society Inc, the group that helps to run the park. He said Tawharanui would provide ideal habitat for the birds and could accommodate up to 10 pairs.

“Members of the takahe recovery team were very excited when they saw Tawharanui,” said Palmer. “The problem with many of the island sanctuaries is the tree planting, which is great for some species but not so good for takahe.

“We’re doing a lot of planting here, but our policy has always been to keep a little bit of farmland, so there are areas where pasture is permanent and there are lots of gullies which are partially vegetated.

“There’s also a permanent spring, so the pasture and water supply provide a great breeding ground for takahe.

“They’ll all be young birds which can wander around freely. Visitors won’t be guaranteed to see them every time, but if they do, they’ll see them in a natural environment foraging for their own food.”

TOSSI needs to raise $40,000 to improve the protective fences and to pay for the birds to be electronically tagged. If any birds try to escape the boundaries of the sanctuary, they will set off alarms.

Too risky for Ketetahi Hut 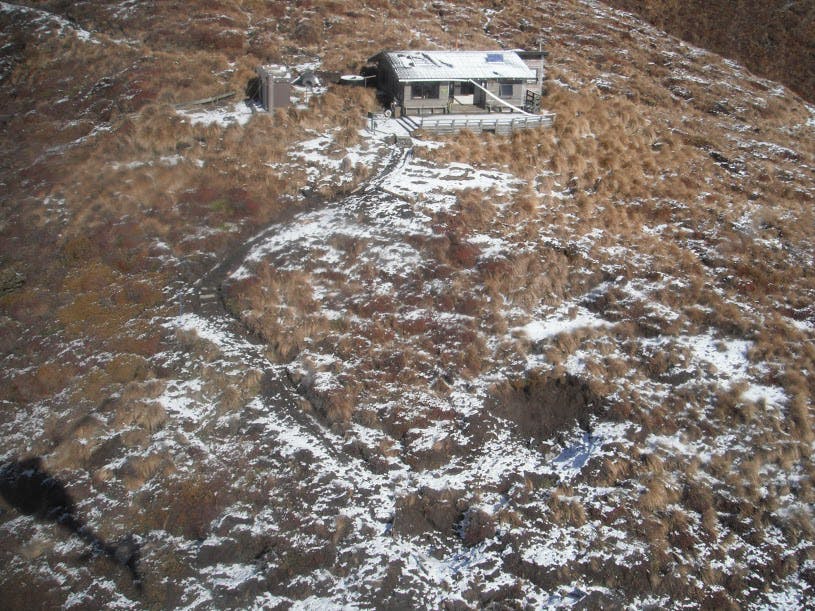 Ketetahi Hut damaged in a 2012 volcanic eruption, will be replaced with a day shelter. Photo: DOC

The threat of more volcanic damage has led to DOC deciding not to rebuild a replacement hut at Ketetahi, which trampers pass on the Tongariro Northern Circuit and Tongariro Alpine Crossing.

A shelter will instead be built at the site so people can still stop for a toilet break and a bite to eat en route.

Plans for the shelter are still to be finalised but it will be built with a more robust roof which can endure the sort of volcanic missiles that destroyed the hut in 2012.

On August 6 of that year the Te Mari crater on Mt Tongariro erupted, putting the hut and the surrounding section of the track out of action.

The track was restored, but staying the night at the site of the old hut has been deemed too risky.

“We’re still working on the final design and funding,” said DOC’s Dave Lumley. “But it’ll be an open shelter because if we build a closed one people may try to stay there overnight.

“Since the eruption, Otutere Hut has become a lot busier, but the online booking system enables us to even out the load.”

There are currently no plans to build a new hut elsewhere on the track.

It’s a small point, but one which had been nagging us for a long time. Why does our mapping system tend not to use apostrophes on place names?

Features such as Gordons Pyramid, Devils Armchair and Stephens Peak should all, grammatically speaking, have apostrophes. Yet there are a handful of names, such as Arthur’s Pass, in which the apostrophe is included.

We asked Wendy Shaw from Land Information New Zealand the reason for this and she said it’s to do with maintaining simplicity.

“Under New Zealand’s national naming rules, the possessive form should not be used for English names unless it is required to retain the euphony of the name (how it sounds) or its descriptive application.

“While the rationale applies for simplicity in place naming, it also relates to the need to avoid any possible misinterpretation of cartographic representation on maps and charts where the possessive apostrophe might be confused with a cartographic symbol

New hut will be ‘much needed’ 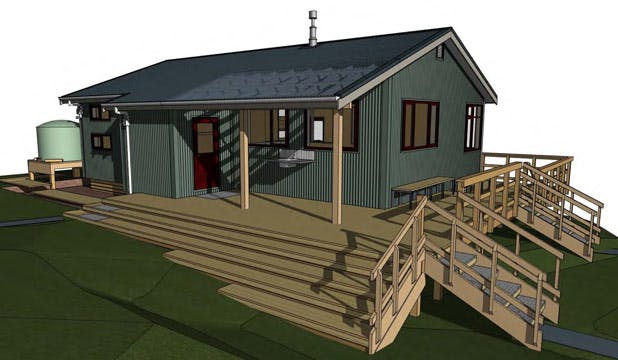 An artist’s impression of the soon to be completed Pahautea Hut. Photo: DOC

Pahautea Hut, near the summit of Pirongia in western Waikato.

The hut was built in 1980 as a six-bunk survival hut. But its popularity has increased to the point where, on certain nights of particularly foul weather, 40 people have been known to cram into the tiny space with overspill sleeping in the shelter used by campers for cooking.

Now DOC is building a $350,000 insulated 20-bunk hut with deck, double glazing and gas heating to cater for the increase in numbers. It’s expected to be finished by the end of June and trampers wishing to stay there will need to book online.

Bruce Postill, the DOC ranger who has been campaigning for a new hut for more than 10 years, said the booking system is necessary.

“Booking may not appeal to the traditional tramper but we need to cater for families, schools and youth groups who want guaranteed beds,” he said.

“There are more than 80 high schools within 90 minutes’ drive of Pirongia – I contacted 20 of them and 18 responded to say we need a bookable hut.

“Pirongia forms the skyline for much of the Waikato basin and there are always people with the goal to climb it and stay up there. It gets special sunsets and you can see Ruapehu and Mt Taranaki, which appears to pop out of the sea. It can be a windy spot – it’s quite exposed, which can make it an exciting place to be.”

The price to stay at the now serviced hut will rise from $5 to $15. The nearby campsite which can accommodate 20 people will not be affected in any way, though a nominal fee, yet to be determined, will be charged. 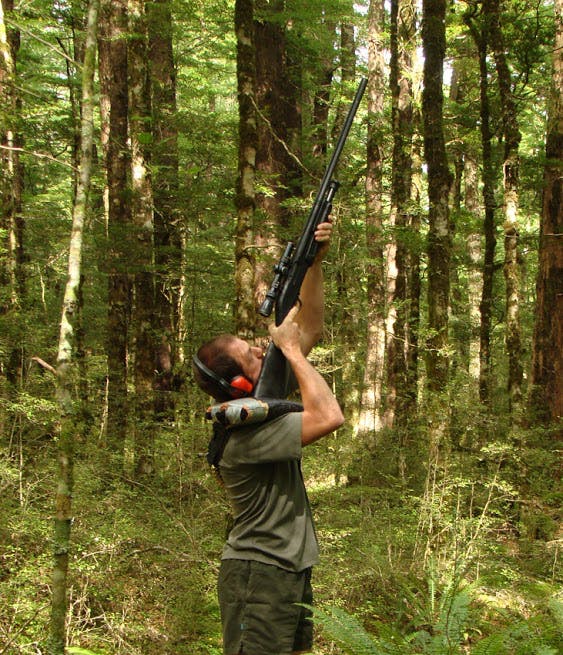 Branch samples have shown that a massive beech seeding event is underway. Beech trees are seeding at a far greater level than normal and these results are widespread.

DOC is preparing to combat an expected predator plague later in the year after a large beech flowering took place last spring.

These latest results, taken from 23 sites from Tasman to Fiordland, give early signs of a large autumn seed fall. This is expected to lead to a surge of pests, such as rats and stoats, which will suddenly have an abundant food source.

DOC scientist Graeme Elliott said: “With the seed fall now well underway it’s expected rodent numbers will begin to increase towards a peak in the coming summer when stoat numbers will also explode.”

Once their initial food source runs out, the pests will turn their attention to what’s left: native birds, their eggs and their chicks.

This could put huge pressure on populations of rare species, such as mohua and various types of kiwi.

DOC has outlined key spots around the country where certain species would need greatest protection. It plans to drop 1080 poison and set up ground-based poison and traps at these locations.

How do they reach the branches?

In order to get an early warning of seeding rates, DOC needs to obtain branches from the forest canopy. And the department has found that, rather than using giant stepladders or asking an arborist to climb the trees, the most efficient way is to shoot the branches down.

Nelson-based ranger Joris Tinnemans had no shooting experience prior to being tasked with the job four years ago. And even he’ll admit he’s got rather good at it. “At the beginning I used a lot of ammunition,” he said. “But now I get through far less. Others have tried but often they’ll use a lot of ammunition or fail altogether. You’re shooting more or less straight up in the air, which is not what people are used to.”

At high altitude, where the trees are not as tall, Tinnemans has an average rate of two shots before the branch drops. It normally takes a couple more shots to remove branches at lower altitudes, where the trees can be 35m tall. “You get a good feel for which branches to aim for,” said Tinnemans. “You want branches that get sunlight for most of the day and which are unlikely to get caught on other branches on the way down.”

DOC uses funnels on the forest floor to measure the number of fallen seeds later in the season, but the shooting gives them an early warning of what’s to come. “It’s painfully obvious how many more seeds there are this year,” said Tinnemans. “In other years most samples have no seeds, but this year there’s as much seed as foliage.”

Other methods of obtaining seed samples have been tried such as climbing trees, which takes far longer, and snipping branches while dangling from a helicopter, which is more expensive and risky.

Shooting pellets into the air has its own risks. “I hit myself once,” said Tinnemans. “The pellet came back down and hit me on the shoulder. I certainly felt it, but it didn’t hurt.”

Boo Boo Hut was the site of a classic mistake 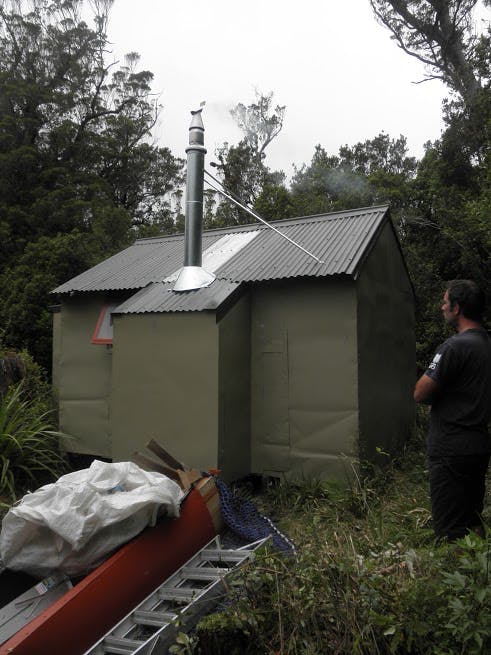 Boo Boo Hut was named when food destined for camps along the Kokatahi River was mistakenly dropped at the Hut site. Photo: DOC

This West Coast hut sits above the Whakarira Gorge not far from Lake Kaniere, near Hokitika. Boo Boo is only minimally maintained by DOC, and the department has stopped maintaining the track leading to it. The Permolat group has done some track clearing work, but the hut’s a tricky place to reach, especially in the wake of recent storms.

Its quirky name comes from a food-based error in the early 1950s, before the hut was actually built. An air drop was supposed to deliver an entire supply of tinned cheddar and 128 tins of raspberry jam to camps along the Kokatahi River.

They were erroneously dropped at the site of today’s hut, which was named after this unfortunate incident.

These days the hut gets very few visitors, despite the Remote Huts website describing it as “super cosy now with the burner going”.

The hut is due to be replaced in the future by a building situated between where the hut currently stands and Pinnacle Bivouac, close to the 1315m summit of Crinkle Top. 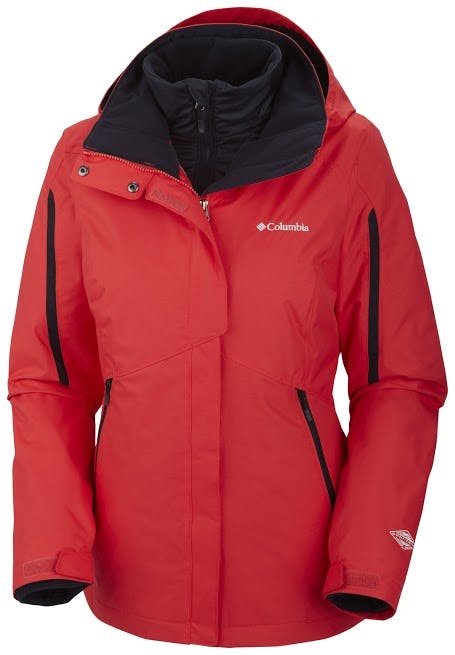 In the snow buyer’s guide in the May issue we incorrectly stated the price of the Columbia Bugaboo three-in-one insulated nylon jacket with Omni-Tech waterproof/breathable fabric. The jacket costs from $299.99 (women’s) and $329.99 (men’s).