The 13-bunk Rangiwahia Hut and 20-bunk Sunrise Hut in Ruahine Forest Park have been operating on a first-come, first-serve basis. Before, users could book the hut, but weren’t guaranteed a bunk. With the new system, trampers who want to ensure they have a bunk when they arrive will have to book ahead.

DOC says more families have been using the huts in recent seasons, and the booking system will make it easier to ensure bunks for backcountry trampers.

“What’s happened with these huts in the Ruahines is that tramping has become more popular, the huts are more popular, and they’re becoming overcrowded on some weekends,” Federated Mountain Clubs president Peter Wilson said.

Backcountry hut pass holders are able to use their hut pass numbers to create a booking by contacting any DOC booking office, and hut tickets will still be accepted. The bookings are open now until Easter weekend 2017. 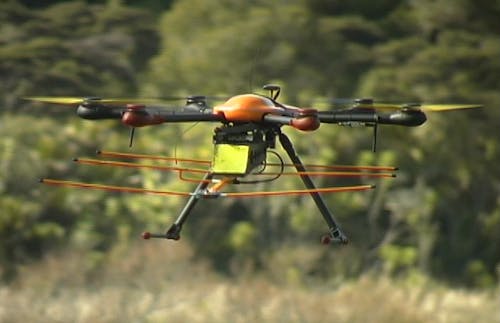 An Auckland conservationist and a robotics engineer have teamed up to develop a drone that will help monitor protected species.

Conservationist John Sumich and co-creator Philip Solaris of robotics company X-craft were awarded $25,000 from the World Wildlife Foundation to develop DroneCounts, a multirotor drone which will be able to receive several signals at once and map animals within an area.

Sumich, one of the founders of Ark in the Park and Habitat Te Henga in the Waitakere Ranges, met Solaris in 2015 during a brown teal/pateke translocation project. As part of the project, the first 20 pateke were tagged with transmitters, which had to be tracked regularly to monitor the birds’ movements.

While scouting out areas to place traps near Bethell’s Valley, Sumich came across Solaris’s workshop where he was working on drones. The wheels started turning in his mind, and when he discovered Solaris was using his drones for search and rescue operations, an idea was born to try out the drones for tracking the pateke.

Sumich gave Solaris some of the transmitters, aerials and receivers used to track birds in Te Henga, and they built the Duckatron.

When they tested the Duckatron, the pilot had to flip through different channels to pick up multiple signals. Sumich said for future models, they plan to use a receiver that will continuously flip through channels automatically to gather as many signals as possible.

“This could pick up 20 signals or more,” Sumich said. “If you fly above terrain, it’s easier to pick up signals because it isn’t modified by going through kilometres of bush or weeds, or whatever – it’s just going vertically.”

Sumich said they foresee it being helpful for tracking kiwi, which are notoriously hard to track because of their elusive and nocturnal nature.

“All around the world, people are monitoring animals and birds at risk, and this will provide another technique that has advantages over some of the standard techniques of monitoring,” Sumich said.

DroneCounts should be ready within a year. 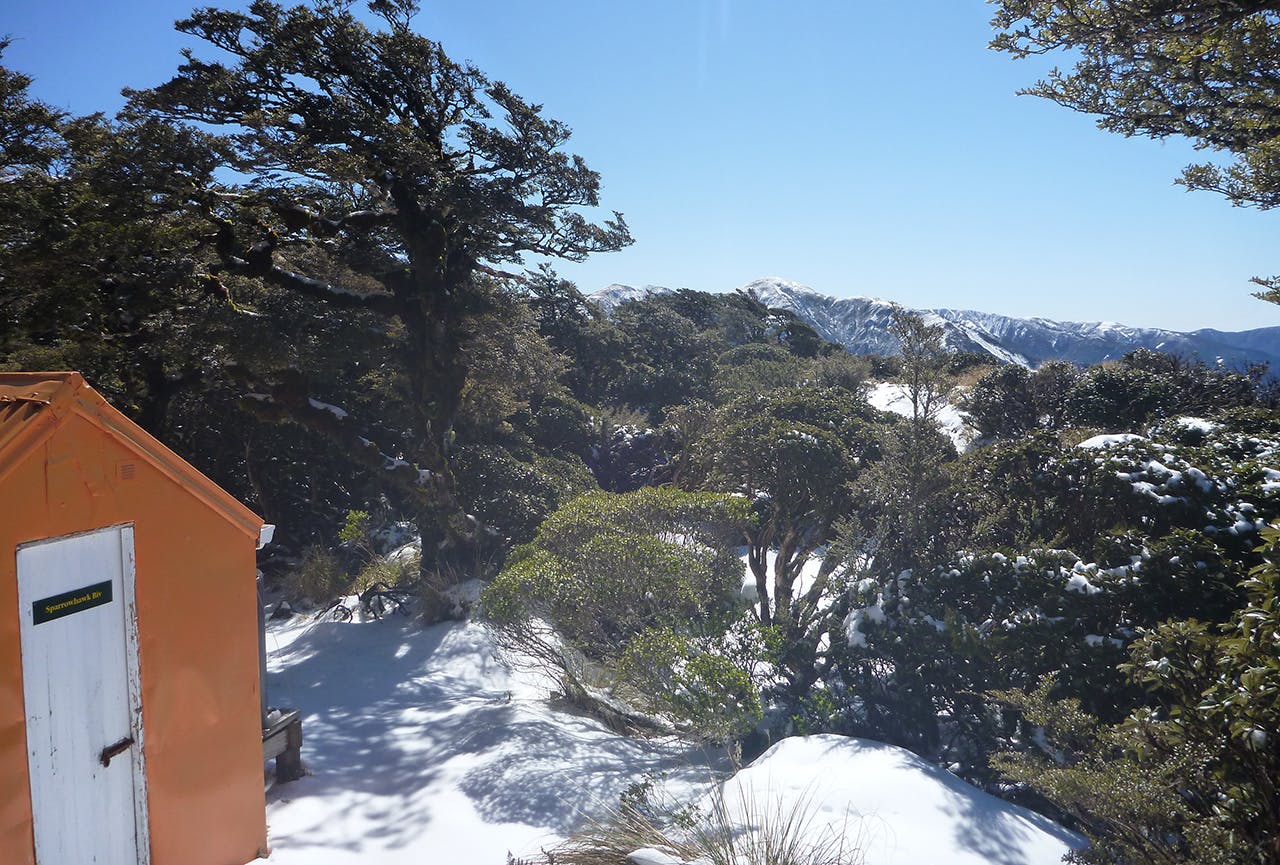 The Ruahines receive heavy snow and strong winds which can damage huts and bring down trees on to tracks. Trampers say DOC’s cutbacks to the region amount to neglect
Photo: Julia Mackie

The Department of Conservation has closed its Ongaonga field base, which now means the nearest rangers to the eastern side of Ruahine Forest Park are based more than one hour away at Palmerston North or Napier.

Two rangers worked from the base, and their positions have been relocated to Palmerston North.

Now, trampers in the region are worried that predator control work will suffer, and track and hut maintenance will be left more and more in the hands of volunteers.

Many trap lines in the park are monitored by trampers. In the past, getting more bait or new traps from the rangers at Ongaonga was a simple matter of calling ahead and stopping by the office. “We won’t be able to do that now,” said Julia Mackie, a member of the Ruahine User Group (RUG) and past president of the Napier Tramping Club. “We’ve lost that immediate response to any issues we have in the area.”

The closure comes as DOC announced two huts in the area – Sunrise and Rangiwahia – are to be added to the booking system and after it changed the backcountry track maintenance schedule in the eastern Ruahines from every four years to every six.

Janet Wilson from the Palmerston North Tramping and Mountaineering Club said: “Once trees come down on those tracks, I think it will be a long time before anyone gets to them.”

DOC’s Manawatu operations manager, Allanah Irvine, said the department’s infrastructure at Ongaonga was under-utilised because it previously provided office and workspace for eight staff, but many of these positions were relocated two years ago.

In a statement, Irvine said: “The [closure] means that both staff and their equipment will be at the most appropriate location for the effective delivery of work.”

But Mackie and other RUG members disagree and see the closure as a sign of neglect.

“It’s like DOC is the Department of Tourism in Fiordland, meanwhile the Ruahines are neglected,” said Wilson. 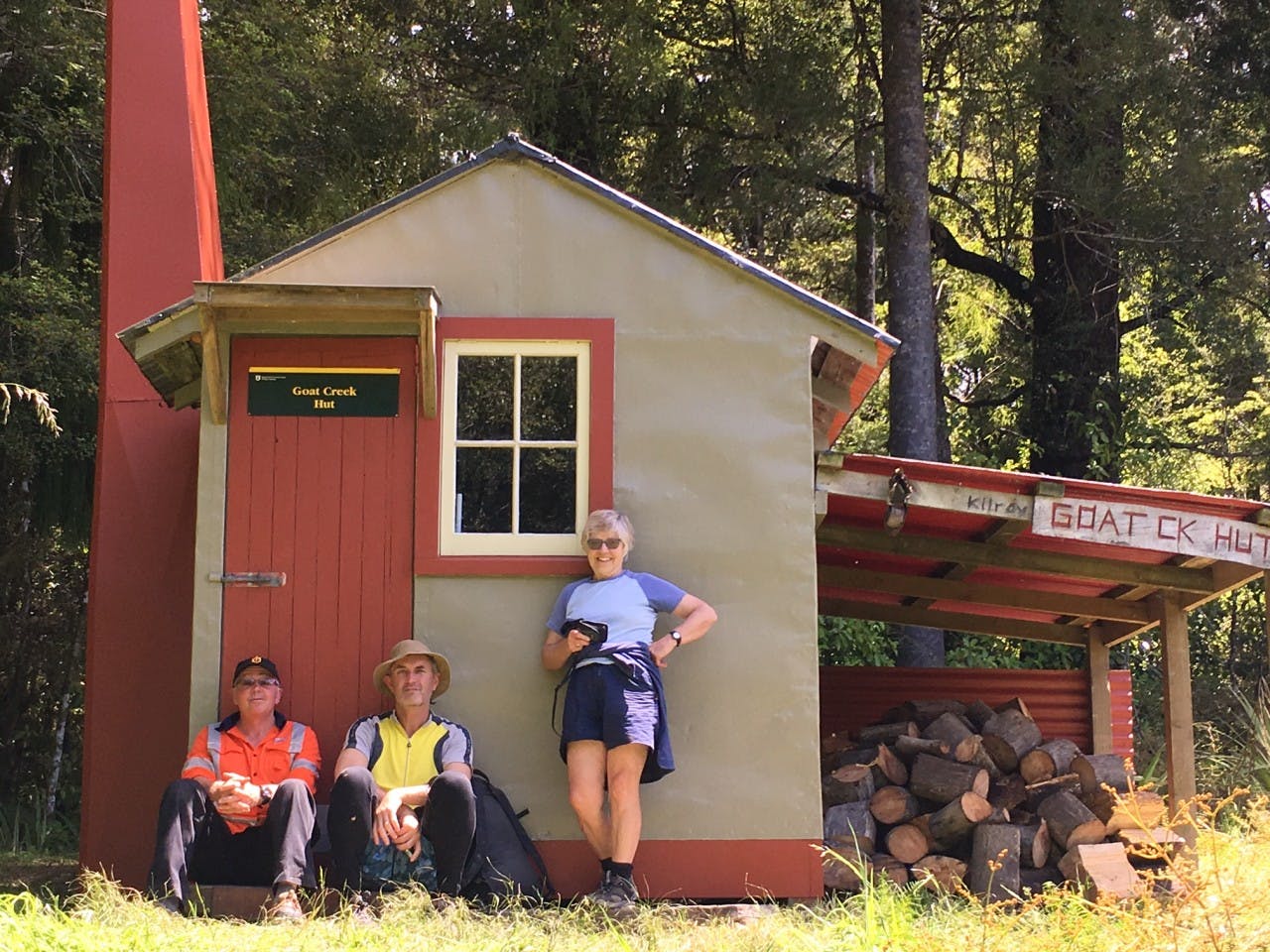 A group of volunteers has spruced up a little old hut on the West Coast in preparation for the upcoming summer months.

The Buller Tramping Club spent a weekend working on the classic four-bunk Goat Creek Hut on The Old Ghost Road in the Mokihinui River area. The hut, built in 1957, now has a new coat of paint and a fully stocked firewood pile.

A team of four – Christine and Mike Wellington, Muriel Donald, Nick Wilson – spent two days cutting and stacking firewood, painting, and cleaning. They washed the mattresses, cupboards, and carried out all rubbish. Christine Wellington, Buller Tramping Club president, said that while they were working, they saw a steady succession of cyclists doing The Old Ghost Road, many of whom stopped for lunch at the hut.

“Anyone who has been into Goat Creek will agree she is looking a million dollars now,” Wellington said. “Let’s hope with its spruce-up that trampers, cyclists and day trippers all respect the work done and pack-in and pack-out: leave no rubbish behind.”

The club had applied for funding from the Outdoor Recreation Consortium to help cover the costs for the work. The ORC, made up of the Federated Mountain Clubs (FMC), Trail Fund NZ and Deerstalkers Association, provided money to have equipment flown in in by helicopter. 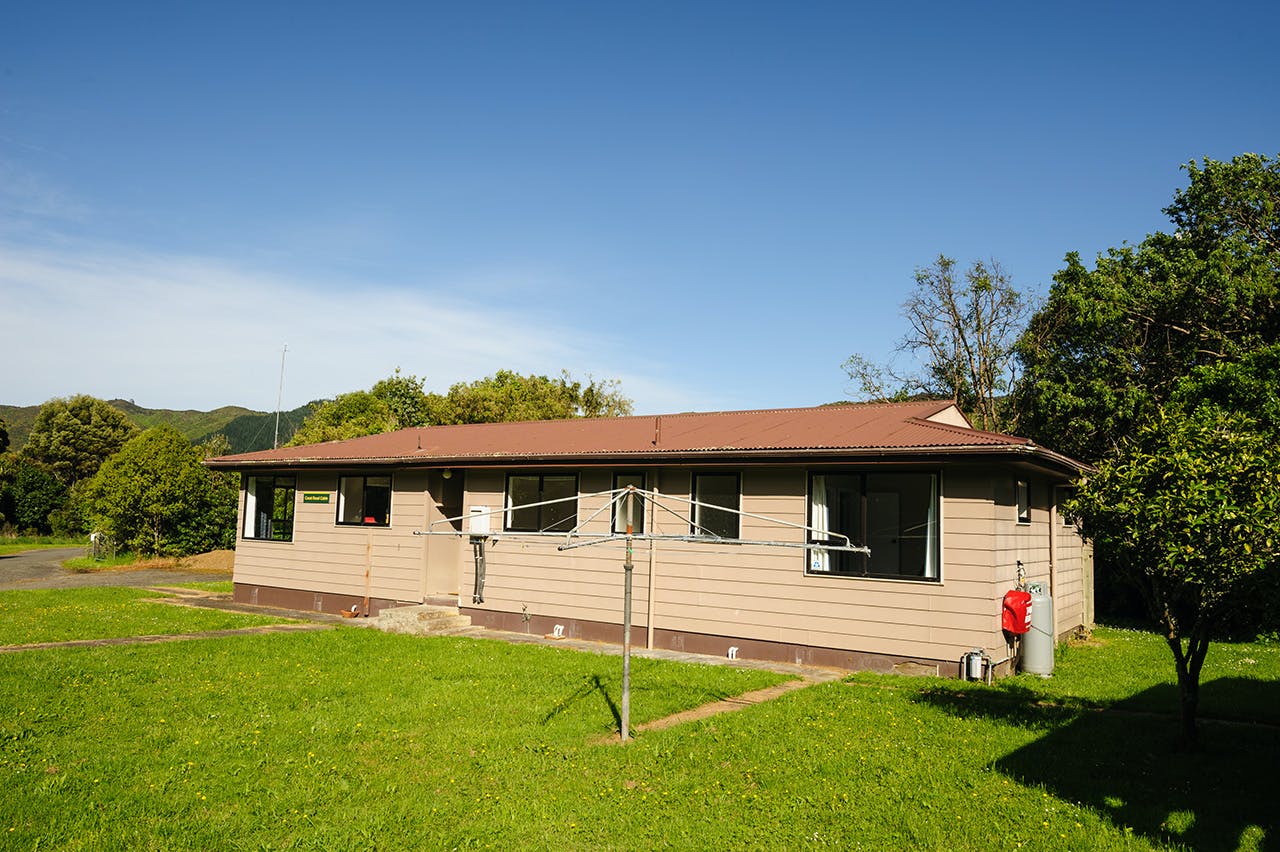 DOC has developed an all-mod-cons cabin in Rimutaka Forest Park.

Coast Road Cabin is much more than your average hut, with three bedrooms, full kitchen facilities, heating, lighting, and, get this: hot showers.

The cabin is at the entrance to the Catchpool Valley, on Coast Road, near Wellington. DOC said the area attracts 25,000 visitors a year. The cabin sleeps up to 13, and is only available to be booked for a single group at a cost of $200 a night.

While the cabin has a microwave, toaster, and flush toilets, visitors will still need to bring their own bedding. The bedrooms have a combination of double beds and single bunk beds, and there’s a double sofa bed in the lounge which sleeps two.

You can drive straight to the cabin; it’s about 45 minute’s from Wellington and is just before the Catchpool Valley trailhead entrance.

“The Catchpool and the Orongorongo valleys are classic Kiwi weekend destinations. We’re pleased to add a new overnight option to make getting out into the hills easier for more people,” said Jace Mace, Kapiti Wellington operations manager.

DOC is expanding its bookable hut network this summer, providing booking options for bunks in huts on the Mt Holdsworth to Jumbo circuit in Tararua Forest Park.

The cabin can be booked online on DOC’s website.