The 32-year-old from Christchurch became the second woman ever to climb the Salathé Wall, one of the original technical climbing routes up the 900m El Capitan. This also made her the first Kiwi to free climb it.

She also became the first Kiwi and fastest woman to free climb the Freerider route in a day. Smith-Gobat shaved nearly 10 hours off the previous record.

“Everything seemed to really click into place this time on El Cap,” Smith-Gobat told Wilderness. “I hadn’t really climbed anywhere with that sort of difficulty before.

“At 900m off the deck, with a free fall to the valley, it’s really exposed and being on my own I had no one else to rely on.

“You’ve just got to dig it out of yourself and that’s a really powerful experience. It taught me that I have a lot more in reserve than I [thought].”

Getting up at 2:30am and hiking for two hours to the top of El Capitan, Smith-Gobat used the early morning hours to practise climbing the Salathé’s top and most difficult pitches.

By mid afternoon she would be back down in the valley where she would hang out with her climbing friends.

“It’s a beautiful place to be able to hang out and chill, have a few beers and look up at where we were climbing the day before,” she says. “It’s an awesome lifestyle.”

After coming back to New Zealand for a couple of months, Smith-Gobat returned to California in December where she will focus on bouldering and sport climbing.

Since climbing the Salathé she admits she’s been feeling lost about what her next mission will be. After having tunnel vision focus on El Capitan for so long, Smith-Gobat says now she feels like she’s drifting.

“When I did it I was stoked and really happy, but really quickly felt a bit lost,” she says. “I haven’t managed to snap out of that yet.”

However she says this won’t last long because the self-described climbing addict has a big year ahead of her.

Along with a few friends she is going on an expedition to Patagonia to scale a never-before climbed 1500m rock face. Because the granite wall looks so similar to El Capitan the group have dubbed it El Hermano – the brother.

Then, later in the year, after a stint of climbing in Europe, Smith-Gobat will be returning to Arapilles in Australia to settle some unfinished business.

Earlier this year she attempted to become the first woman to climb the Punks in the Gym route on Mt Arapilles.

“Once I’ve tried something and got close to it, it’s hard to let it go,” Smith-Gobat said. “I just felt so close so many times, but for some reason couldn’t quite nail it. It was really frustrating.” 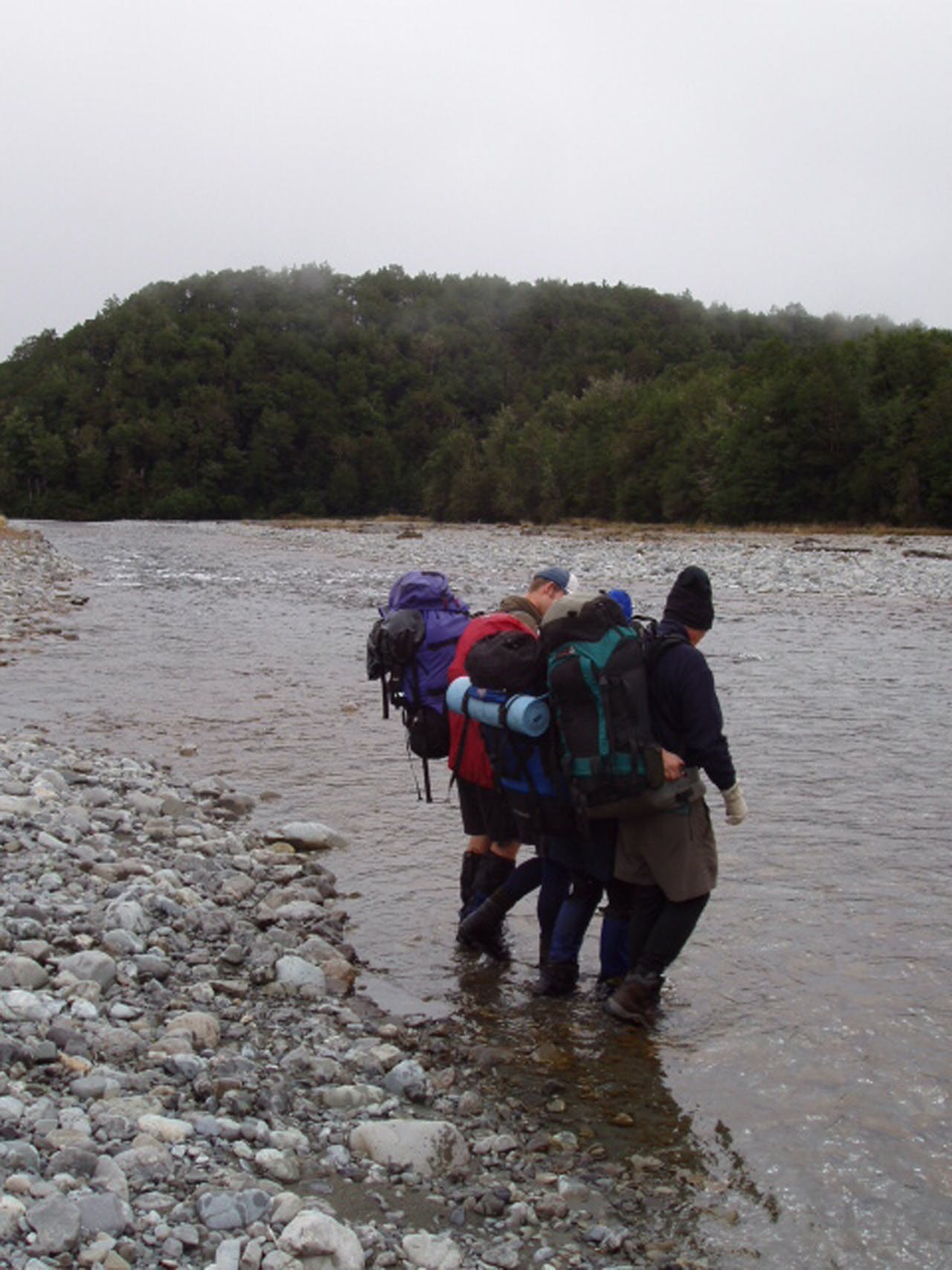 The summer tramping season got off to a bad start in December when one Richmond tramper drowned in Mt Richmond Forest Park and two tourists drowned while attempting to cross a river near Franz Josef.

So, how do you cross a river safely? The New Zealand Mountain Safety Council recommends you ask yourself three questions when approaching any river crossing situation:

If you decide that you need to cross, assess whether the river is safe to cross and if all group members are adequately equipped and capable of crossing safely. If in doubt, sit it out until the water level drops or conditions change.

2. Where do we cross?
Choosing the safest place to cross is vital. Try to view the river from a high bank. You may be able to see gravel spits or sandbanks just below the surface and get an idea of the depth and position of channels.

Mutual support method: The group lines up with the strongest person at the top upstream. The others insert arms between each other’s pack and their back, grasping their hip belt or pack strap. Cross the river as a group.

Using a clothing grasp: Similar to the mutual support method, except you grab the pants at hip level. This is a good variation for straightforward crossings where the river is knee to mid-thigh deep and there is a weak current. Cross the river as a group.

Individual method: A useful technique for solo trampers. Use a strong pole, about 2m in length and comfortable to grasp. Hold the pole in both hands diagonally (upstream) across the front of your body, leaning on the prop as a ‘third leg’ to balance as you move each foot forward.

When approaching a river or stream, look for the warning signs: 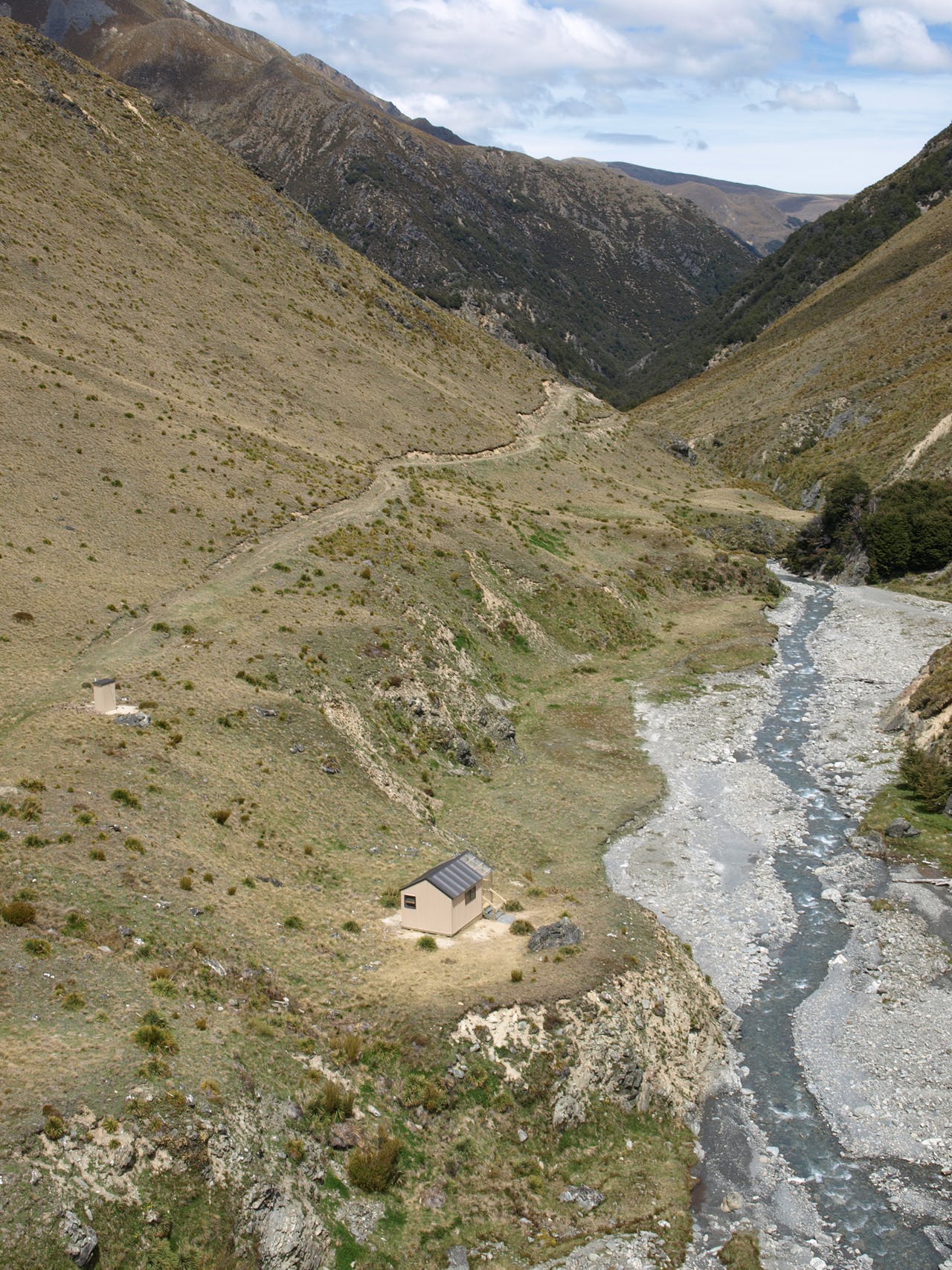 The Department of Conservation has moved Top Timaru Hut in Hawea Conservation Park to the opposite side of the Timaru River.

This means visitors will no longer need to cross the river to reach the hut – a dangerous prospect when the river is in flood.

Built in 1962 as a forestry hut, Top Timaru Hut has long been popular base for hunters. But with the Te Araroa Trail passing through the valley, the hut is increasingly being used by trampers.

The hut has been clad in coloursteel to blend into the tussock setting and it’s sleeping capacity has been increased from four to six. A covered porch has also been added.

“It’s had a significant makeover and, in this ideal location, should be around for another 20 years,” said DOC’s Paul Hellebrekers, the area manager for Wanaka.

Te Araroa Trust South Island project manager Michael Pullar is pleased with the upgrade: “The hut’s relocation and upgrade was a welcome effort on a trail section that is a Te Araroa highlight.”

The full track from Birchwood Road in the north to Timaru River Road on the shores of Lake Hawea is 54 km long and takes three to four days. The track includes the Breast Hill section opened in March this year. 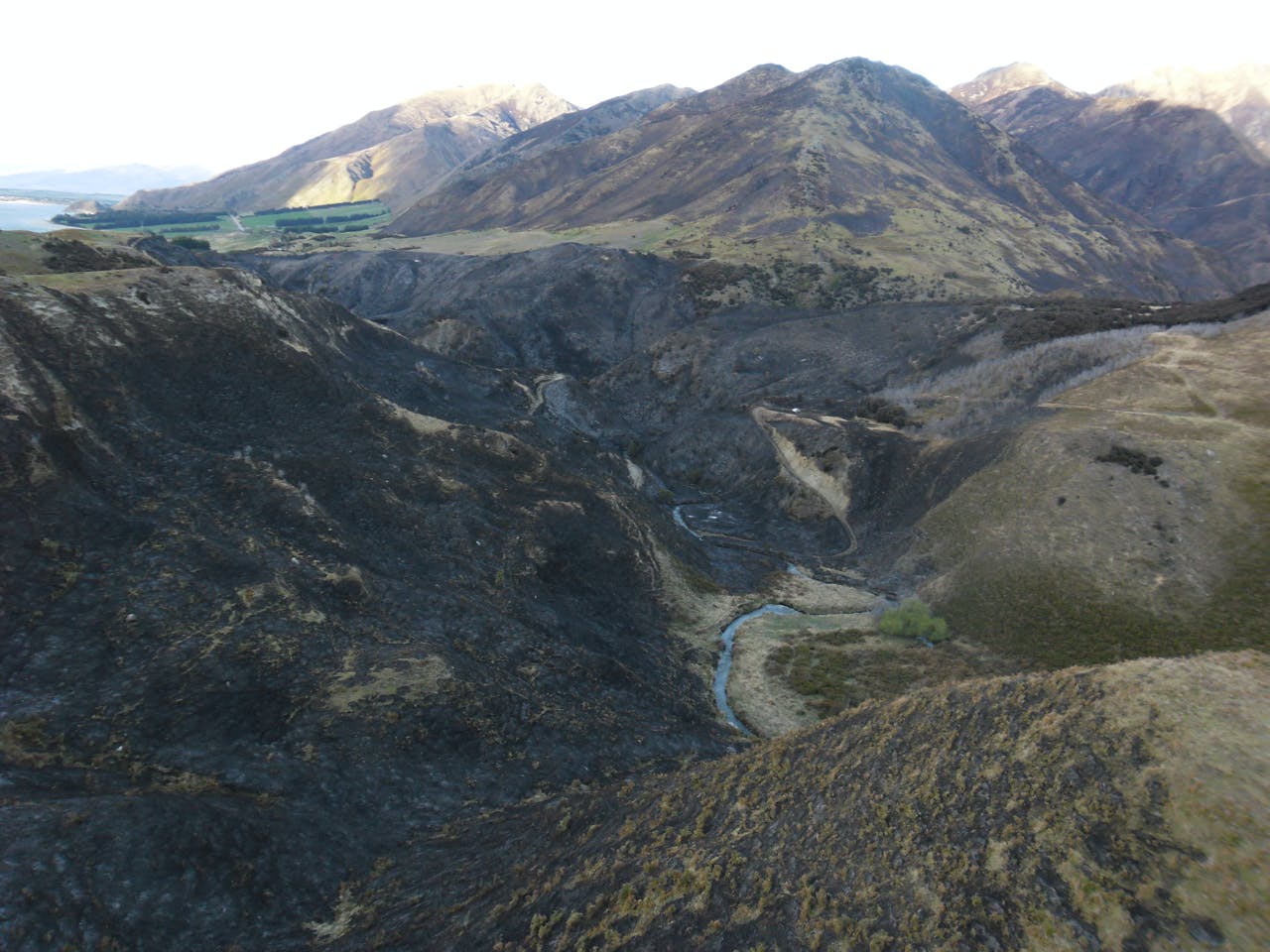 A fire apparently lit to clear bracken from a neighbouring high country station has caused significant damage to the Matatiaho Conservation Area near Lake Hawea.

Otago Conservation Board members have said they are shocked at the extent of damage, which is suspected of being lit on neighbouring Glen Dene Station but rapidly spread into the conservation area.

About 30ha of regenerating native vegetation was destroyed before the fire was brought under control. It took five helicopters and fire crew from Hawea, Luggate and Wanaka, as well as local Department of Conservation staff, to extinguish the blaze. An investigation into the fire is underway and the total cost of fighting the fire was not known.

Local resident Carl Thompson sent photos of the damage to the Otago Conservation Board. Thompson described the scene as being “like Armageddon”. The affected area had been healthy regenerating beech forest that formed an important corridor of native habitat between the mountain tops and Lake Hawea. It was a popular hunting and tramping area for Wanaka residents.

Is FlashDry an Icebreaker killer? 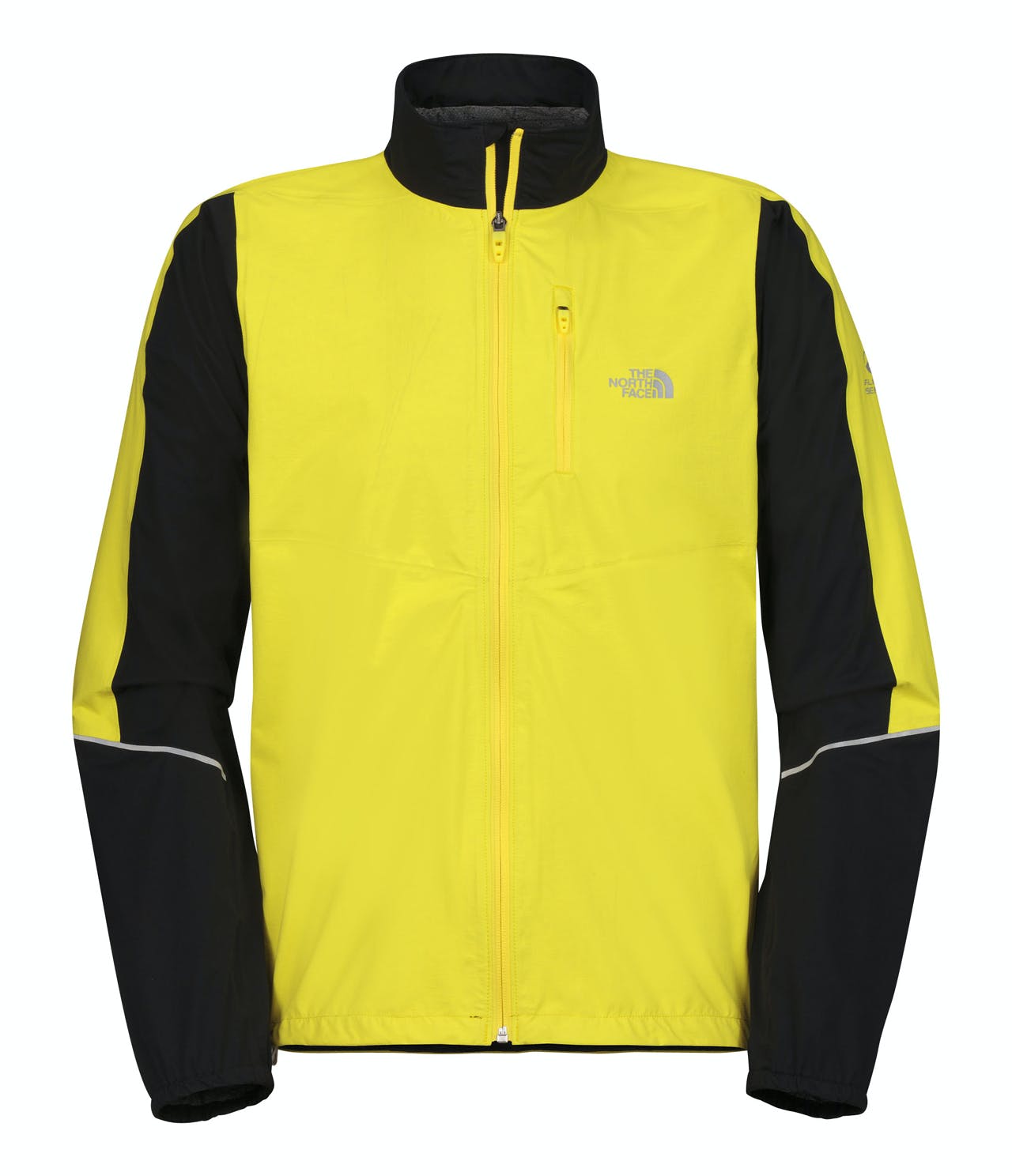 FlashDry can be applied to waterproof laminates as well as yarns. The technology works by spreading moisture over a larger surface area, speeding evaporation

Outdoor clothing and apparel manufacturer The North Face believes it has hit paydirt with its newest fabric innovation FlashDry.

At the recent San Francisco launch of FlashDry, which Wilderness attended, one TNF representative was so enthusiastic about FlashDry’s ability to, well, dry in a flash, that when he heard Wilderness’s Kiwi accent he labeled it an ‘Icebreaker killer’.

Kiwi’s love their Icebreakers – the gorgeous merino wool garments feel soft against the skin and keep the wearer warm for days on end without holding their odour. But the one drawback of any wool garment is its dry time – it can take an age.

That’s where TNF feels it can best Icebreaker. In a nutshell, FlashDry is particles of carbon embedded into the yarn at a molecular level. When made wet, the carbon molecules quickly spread the water to neighbouring molecules – the bigger the surface area the water is spread over, the quicker it evaporates. Apply it to, say, merino yarn and you can make a woolen garment that dries as quickly as its synthetic counterpart.

FlashDry can also be embedded into printable layers which can be applied to waterproof laminates.

In the ‘laboratory’ (i.e. conference room full of journalists) tests witnessed by Wilderness, two drops of water were placed on a pad heated to body temperature and then covered by various fabrics from competing brands. In every test, FlashDry was far and away the quickest to dry. It also performed well when layered. The ‘next-to-skin’ layer wet through, passing the water to the ‘outer-layer’ where it evaporated in a matter of seconds. Both layers were dry before the water had been full absorbed by the competing fabrics. This is where TNF hopes its new technology will really win people over. By wearing two or more layers of FlashDry, the company says, users will be able to better regulate body temperature.

But ‘lab’ tests are one thing. Wilderness hasn’t seen the fabric work in the real world, though will hopefully have some products to test next year (it’s due for its US release this northern winter, so won’t be seen here for another few months at best). All TNF gear is put through the ringer by its group of hardcore athletes before they’re sent to market. Long distance runners like Dean Karnazes and high-altitude climbers like Conrad Anker have tested FlashDry and given it the thumbs up.

Whether it’s an Icebreaker killer or not is yet to be seen.