If you’re keen enough to venture to Rob Roy Glacier and marvel at the lofty summits at the head of the valley, a little extra planning and preparation could help you reach a vantage point above the glacier.

Rob Roy Peak (2644m) is within the grasp of any sure-footed tramper. The most convenient route is not found through the steep imposing wall at the head of the, currently closed, tourist trail to the glacier, but via a side creek and ridgeline gained at the mouth of the Rob Roy Valley.

For many years, I thought about, considered briefly, but ultimately ignored, Rob Roy Peak. It was not the fault of the mountain, but the many other distractions in Mt Aspiring National Park and further afield. It did not occur until recently that its proximity to the park boundary or, more importantly, the road end, was far more attractive and a welcome relief to any 25km valley walk.

Steep ridges and glaciated terrain may not appeal to everyone, but if you have a head for either, and some experience with the latter, this is a trip that will inspire you. Climbing Rob Roy is akin to a pocket-sized version of Mt Aspiring. Shorter walk, lower objective danger, further from the Main Divide, no one else for miles, and it’s a large accommodating summit. You can choose how much vertical gain you want to endure on any given day, taking anywhere from one to three days.

From Raspberry Creek, it takes a little over an hour to get amongst the steeper bush. Cross the swingbridge over the Matukituki River West Branch that leads to the Rob Roy Glacier lookout. Follow the well-defined track until the bush thins out and you can see down to the Rob Roy Stream.

Walk straight down, stepping over a fence, and cross the stream. Continue west and parallel to the Matukituki River for approximately 1.5km, before gently rising up with the shingle fan that leads into the stream directly opposite Wilsons Camp Stream.

The upper basin is accessed on the true left of the stream, but occasionally, when the gorge narrows, the stream may have to be crossed, which is only possible if it hasn’t rained for some days. 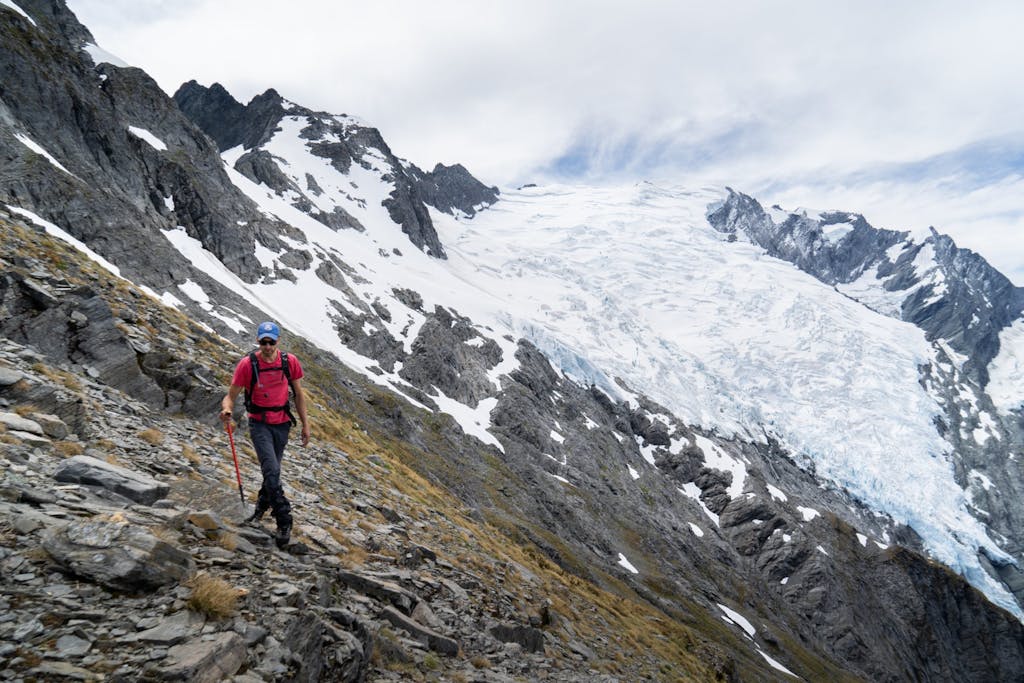 On the descent, with the glacier and rob Rob Peak to the right. Photo: Gavin Lang

From the 800m to 1600m contour, trend right towards the ridgeline through low scrub. If this scrub is too thick or tall, you may have moved to the ridge too soon. There is a comfortable bivvy site at 1600m, but if you are continuing the same day to the summit, be sure to stop and take in the expanding view. Water isn’t available at the bivvy site unless you’re there early in the season, when there’s likely to be snow. Otherwise, there are some streams from the melting glacier at about 1900m.

From Pt1695, aim towards Pt2049 and at approximately 1850m, cross the ridgeline onto the east-facing slopes beneath Glengyle Peak. Here, you’ll most likely need to don crampons – if you haven’t already.

Traverse east along the Rob Roy Glacier – route finding here is not complicated – angling upwards towards the south ridge of Rob Roy Peak.
When this ridge is reached, you’ll be gifted one of the best views of the Southern Alps. First Mt Earnslaw, then Tutoko to the south, and then a beautiful panorama including Tititea/Mt Aspiring and all its outliers, right through to Aoraki/Mt Cook and the cluster of giants in Aoraki/Mt Cook National Park.

We sat comfortably on the summit for almost an hour enjoying the surroundings, including views to the Wanaka lakefront, and then opted for a steeper descent close to the stream, to avoid the gruelling scrub experienced on the ascent.

For us, this was a day-trip which allowed light packs and freedom, especially through the scrub.

Rob Roy Peak is an overlooked adventure waiting in the backyard of any Wanaka resident or visitor. From Wanaka lakefront it is almost completely obscured by Niger Peak, hiding behind its right shoulder. Due to its distance from town it lacks the prominence to make it easy to identify. But the vista that unfolds before the keen climber who ventures to the summit is unmistakably grand.

It’s a mountain to ascend in the simplest format and sometime around mid-summer is the best time when the spring snows have usually settled, the slopes are not broken by crevasses and travel through the glacier is straightforward.