Mountain biking is fast approaching a golden age thanks to the national cycleway and recent moves by DOC to open some national park tracks to two-wheeled transport. Here’s our pick of the best three winter rides. By Derek Morrison

This has got to be one of the country’s greatest multi-day rides, which is in the second year of a three-year trial to open it to mountain biking from May 1 to September 30. The 78km track traverses from Brown Hut in Golden Bay, to Karamea on the West Coast. It can also be ridden in the reverse direction. Rated at Grade 4 to 5, it requires a good level of fitness and skill.

The track is a Great Walk standard and over the last summer many of the bog holes have been gravelled and several swingbridges replaced with rideable ones to make it even more enjoyable. Heaphy Hut is being replaced by a modern new hut and the new Perry Saddle Hut has almost been completed to make seven huts in total.

While it’s possible to ride the track in one day, DOC doesn’t allow this. Besides, it’s much more fun as a three-day ride. A stay at Gouland Downs or Saxon huts and then Lewis or Heaphy huts will give you the best chance of hearing kiwi.

Riders need to show courtesy to other track users, they shouldn’t ride at night (to avoid disturbing Powelliphanta – giant land snails and great spotted kiwi or roa) and keep bikes out of the huts. It’s a real gem of a ride, but it will take some maturity on the bikers’ part to ensure it stays open beyond the trial period. 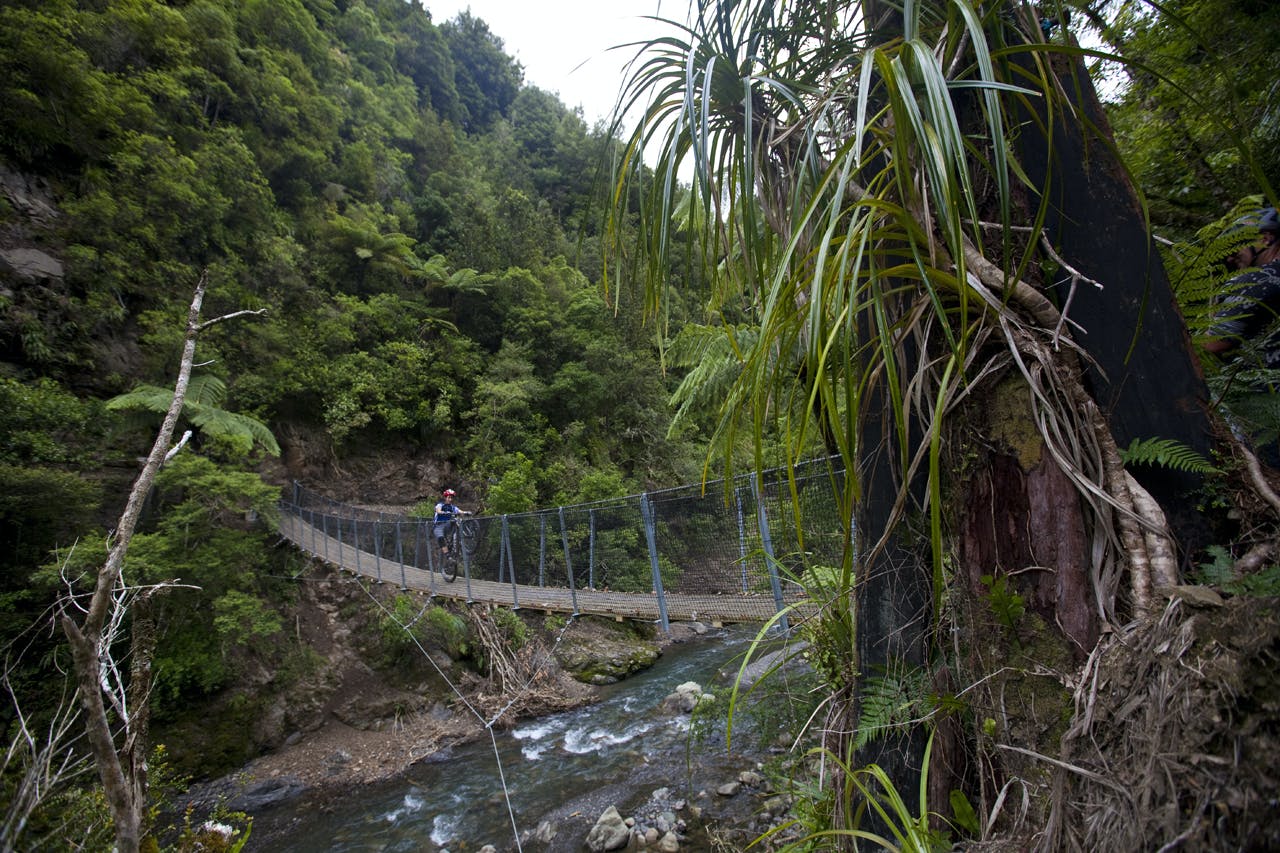 The Motu Trails follow an ancient route between the Bay of Plenty and Poverty Bay.

The trail is split into three main sections: The Motu Road, Pakihi Track and the Dunes Trail. The Motu Road Trail begins at Matawai and follows the historic coach road to the coast where it connects with the Dunes Trail – an easy 9.5km ride to Opotiki.

The real gem in this spectacular network is Pakihi Track – a 20km stretch of Grade 3-4 trail that diverts riders from the Motu Road along an old stock route in the Uratawa Conservation Area.

About 10km into the trail you will find the six-bunk Pakihi Hut and a good bed (with mattresses) and warming fire for the night. The following day is a leisurely ride alongside Pakihi Stream on one of the country’s best mountain bike trails. Waterfalls, native birds and the bubbling stream below are the only other sounds to join the rattle and hum of the bikes.

The Pakihi Trail is one way for bikers and requires moderate fitness and a good skill level to avoid the numerous drop-offs alongside the Pakihi Stream.

The final 24km ride on roads (7km of gravel) to Opotiki will conclude your 73km adventure.

Access Start at Matawai and ride 14km to Motu on the Motu Road. Continue for another 15km to where you will find the turn-off for the Pakihi Track. The Pakihi Hut is about 10km down this first section of trail.
Time Two days
Map BE41, BF41 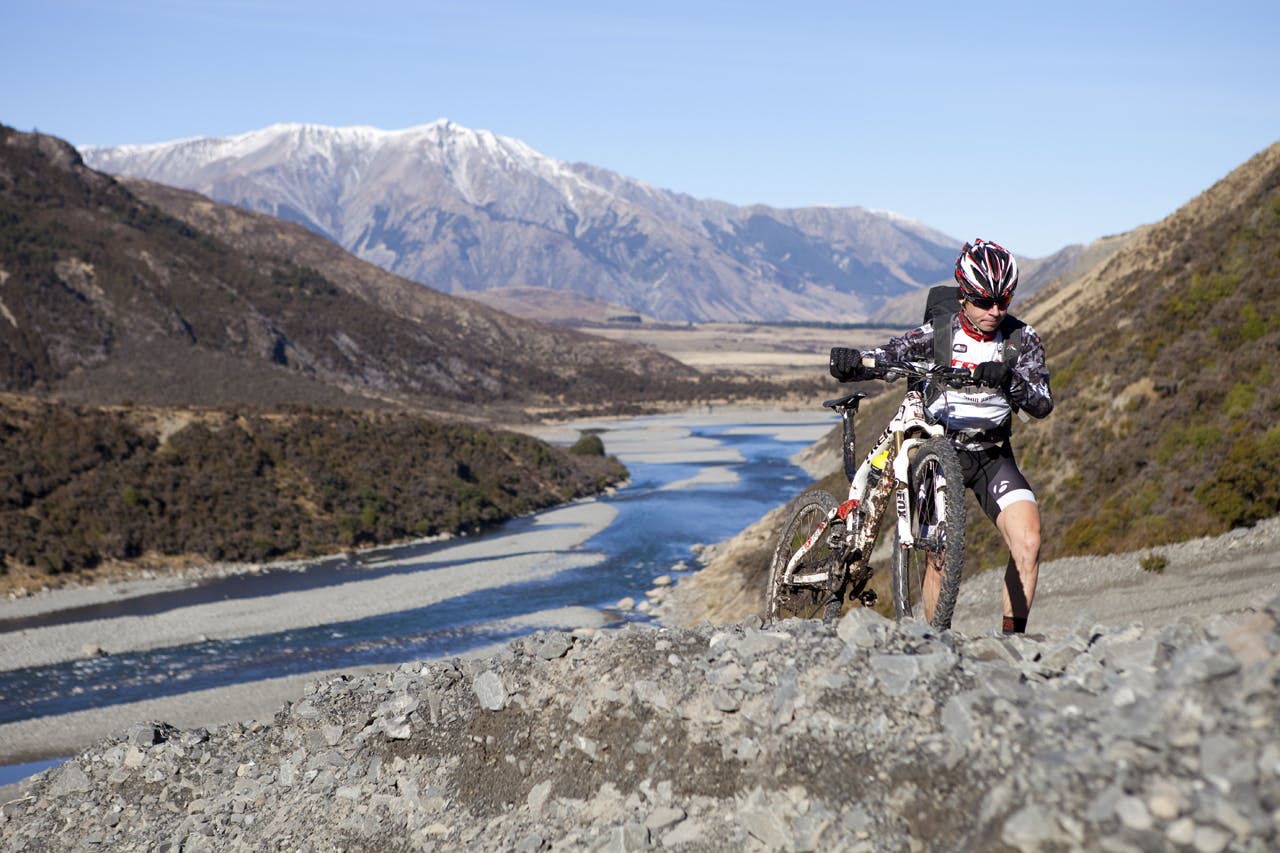 While it is only a 27km ride to the Trust/Poulter Hut (six bunks), the feeling of being deep in the mountains is what makes this a standout ride.

The trail begins on a paper road through Mt White Station until it meets the boundary of Arthur’s Pass National Park and from here the 4WD track skirts up the true right of the Poulter River. Veer off up Casey Stream and you will find Casey Hut nestled in the beech forest with views up to Castle Hill and of the Poulter Range.

The 16 bunk Casey Hut is in excellent condition and has a fast-heating fire.

Continue on up the Poulter Riverbed for another 6km to the Trust/Poulter Hut. Keep to the riverbed and don’t be tempted to ride the walking tracks – like the Heaphy Track this trail was opened to mountain biking after a three-year trial, which began in 2007.

The track crosses the Poulter River several times so take care in times of high rainfall.

The terrain is not technical with just a few climbs near the start to get the blood flowing and some fun descents. Plan to get to the hut with plenty of daylight as the temperature will plummet overnight and frosts are pretty severe up here and can last for days in winter.

Dump the bikes at the hut and hike the 6km to Lake Minchin if you have time. (Bikes are not permitted beyond the hut).