Links/Files
Download the route notes, maps and GPX file for this trip

The southern end of the Waitakere Ranges provides the highest hills in the region. It also provides views of sheer rock cliffs among otherwise forest-covered hills.

The hills are steep and offer wide views over Manukau Harbour and back towards the distant city of Auckland. But for this and the odd rumble of aircraft, you’d never know you were so close to New Zealand’s biggest city.

Huia Bay is sedate to say the least. The small tidal river running from the nearby reservoir flows ever-so gently under the small bridge and out to sea. It’s a beautiful setting from which to begin the tramp.

It’s a good workout and there’s plenty to keep you entertained as you go.

I left the van next to the river that runs between Lower Huia Reservoir and Huia Bay. Straight away I was climbing sharply up Twin Peaks Track trying to outpace my New Year hangover. The climb was steep in places but the track is a good clear back country route. Every so often, a clearance in the trees gives the chance to look back over the bay towards the city and across the valley to the rock faces on the hills opposite. 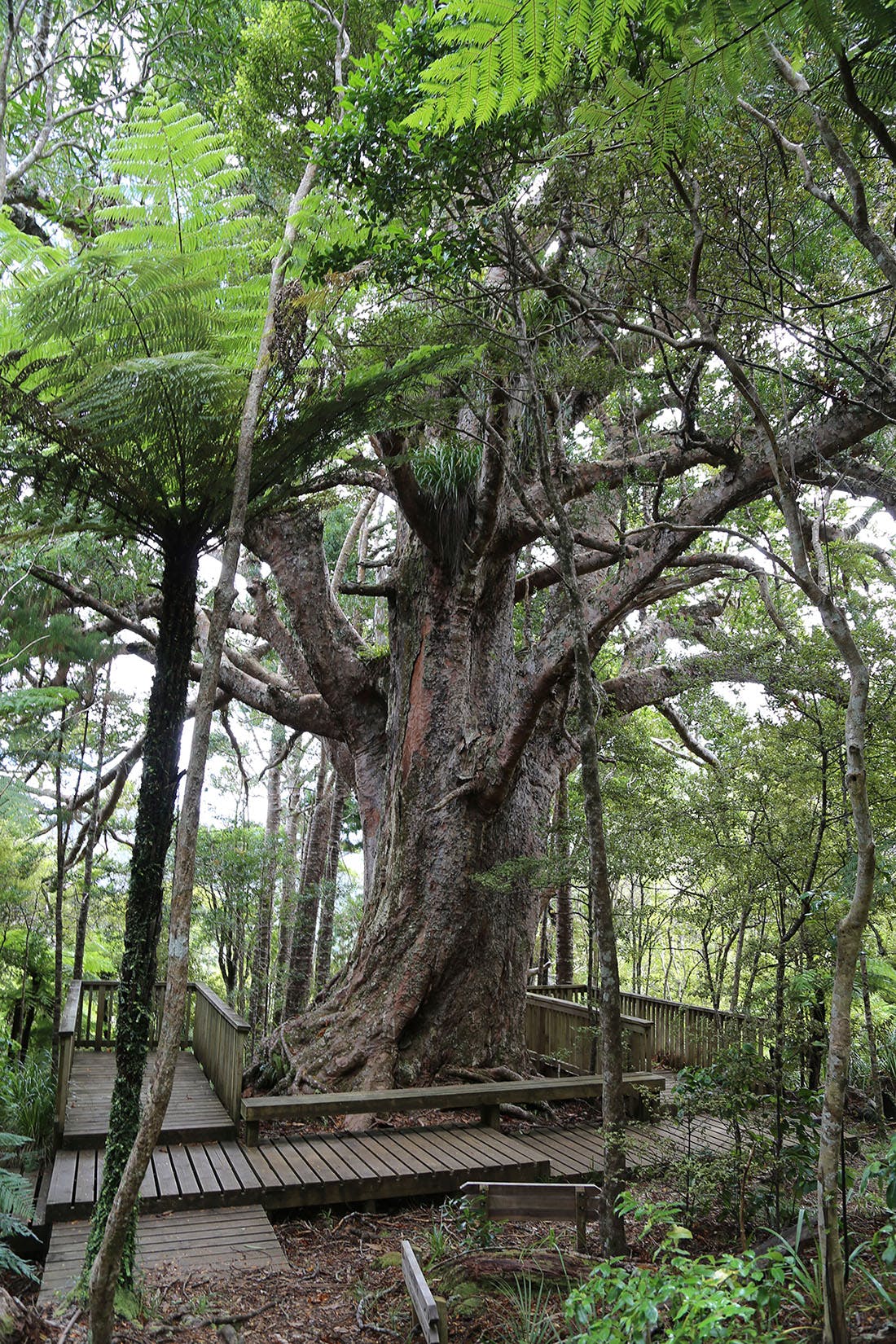 The unusual shape of Tom Thumb kauri saved it from the logger’s saw. Photo: Matthew Pike

I nearly forked left on to Tom Thumb Track when I lost my concentration but soon found my way to the enormous Tom Thumb kauri that greets walkers at the foot of the track to Goat Hill. The tree’s unusual trunk shape made it unsuitable for logging and it is the largest tree on the walk, making a good resting spot.

The short side trip up Goat Hill is worth it, as it’s the only vantage point for looking north towards Lower Huia Reservoir.

Twin Peaks Track continues to rise over the unnamed twin peaks before the final, somewhat gentle assault of 474m Te Toiokawharu. However, there is no sense of elevation – there’s no view and the surrounding forest is as lush and varied as at sea level.

It wasn’t long before I reached a junction where I headed left, following Huia Ridge Track towards Karamatura Forks. I was a little disappointed there were no views of the surrounds in any direction along this stretch. But I made good ground because much of the track is covered in boardwalk and any rises and dips are minimal.

Reaching Karamatura Forks, there is a short section of beech forest. Heading left, following the sign towards the car park, I joined Karamatura Tack, which is part of the Hillary Trail and in excellent condition. A gradual descent turned into a steep section leading to Karamatura Stream. 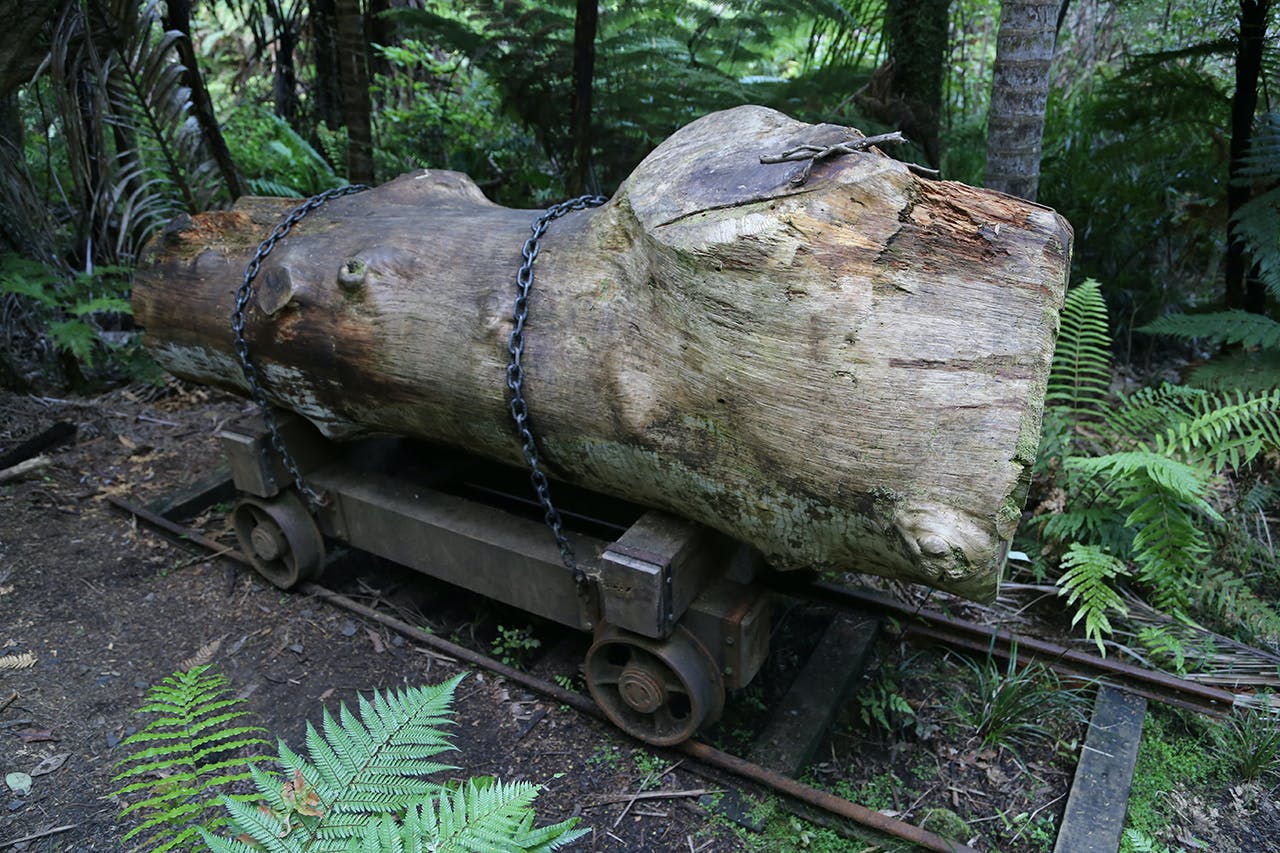 At another junction where I could have taken the Tom Thumb Track, which rejoins Twin Peaks Track, I continued along the now easy-grade Karamatura Track towards the car park. There’s an old wagon on display carrying a large tree trunk as a reminder of the region’s kauri felling past when tram lines were used to transport wood from the hill to the mill.

Just after reaching the kauri dieback boot-cleaning station, a path forked left. I kept following the Hillary Trail markers over the stream and across one campsite, then up a hill to a gate close to the campsite toilet, then over several paddocks to a second camp site, enjoying views of the hills to my left.

I walked through the gate to the left of the barn and followed the track down to the road, turned left and after about 200m I saw the van.