A new era for the Great Walks looks in the making. DOC has $12.7m to develop one or two new Great Walks, and the three options being considered could all bring something new to the network. 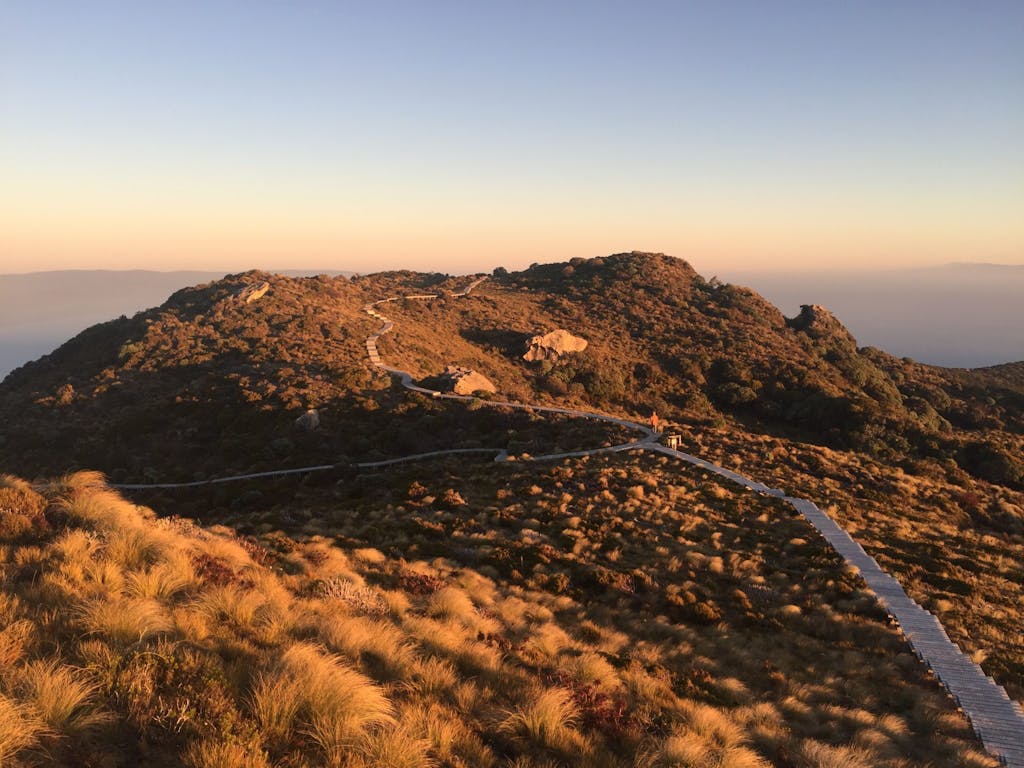 The track was built in 2001 by a community trust and is run as a semi-private walk on conservation land.

Income from the track is spent on community projects. Tuatapere Hump Ridge Track Ltd board chair Don Frengley says given the effort the community put into developing the walk, he expects the trust will continue to get a dividend if it became a Great Walk.

“One thing we would not be thrilled about would be to turn it over to DOC and lose the benefit of the ongoing dividend.”

The biggest challenge for it to become a Great Walk is the distance walked each day. With only two huts, walkers cover at least 20km a day, including over 1000m of ascent on the first day.

However, the trust is planning to start a 4WD shuttle service to cut 7km from the start and end of the track. It could also build another hut, but that will be expensive.

Frengley says the track needs a little bit of work to upgrade some muddy sections but believes it would cost less than $2m to upgrade.

So why should it be a Great Walk?

“It’s a tremendous track. You walk through a beautiful coastal area, travel up through native forest, then you get above the bushline into a subalpine zone to Okaka Lodge, with absolutely cracking views. You get gorgeous sunrises and sunsets, all from one location.” 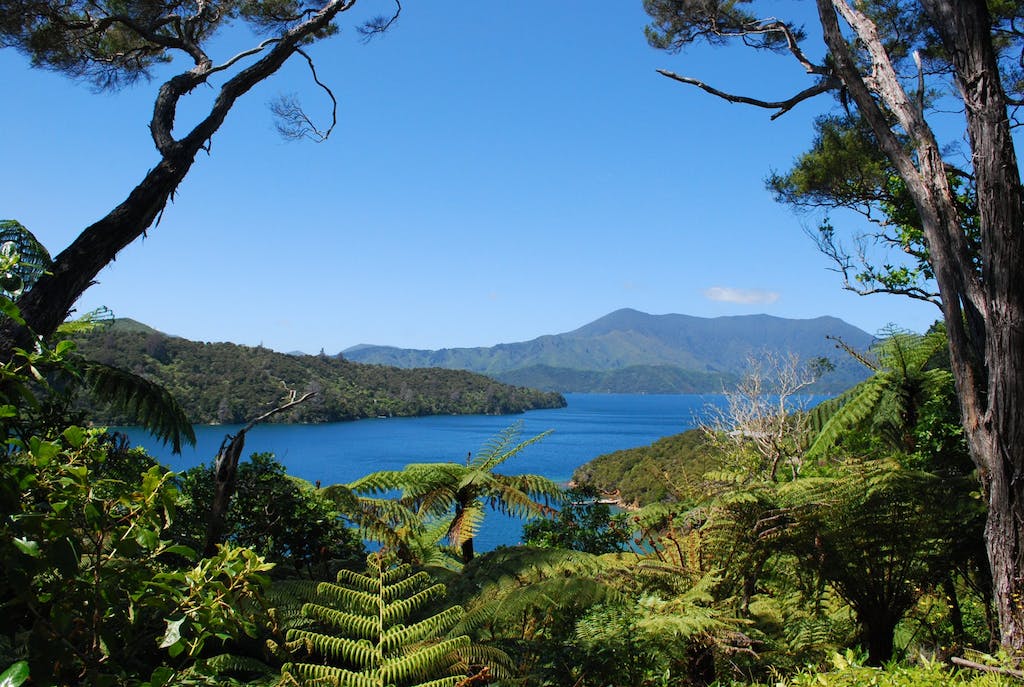 The view from the Queen Charlotte Track. Photo: DOC

Starting from near the northern tip of the Marlborough Sounds, the Queen Charlotte Track would bring a spectacular part of the country into the Great Walk network.

The 71km dual-use track traverses through a labyrinth of bays and peninsulas that characterise the Sounds.

It would be the first Great Walk to include significant sections of private and council land – 27 per cent of the track is council reserve, 20 per cent private land and the remainder DOC reserve.

Trampers currently pay an $18 fee which goes to the landowners and towards track maintenance.

It would also be the second longest Great Walk, and there are no DOC huts on the route, although there are seven DOC campsites on the track and in nearby bays. Many walkers and bikers opt to stay in one of the numerous private baches, lodges and B&B’s.

Another challenge is that the walk is the start of the South Island leg of the Te Araroa Trail, meaning about 1000 TA hikers walk the track during the peak summer period when the trail is most likely to be booked out.

Queen Charlotte Track Trust chairman Rob Burn says the track could do with a DOC hut on one of the longer sections.

“I would like to see a DOC hut up on the ridgeline where the views are great,” Burn says.

The walk includes historic sites, such as Ship Cove, where Captain James Cook came ashore in 1770 and stayed five times on different trips. 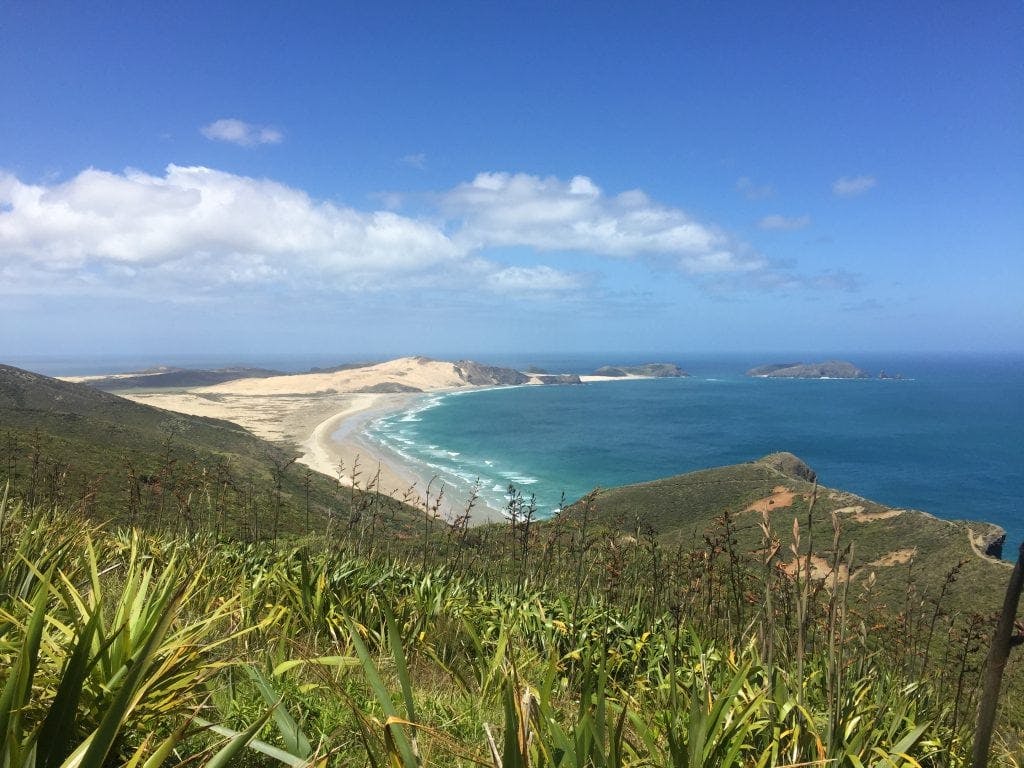 The view from Cape Reinga on the the Te Paki track. Photo: DOC

Traversing around Cape Reinga, the Te Paki track would bring a pleasing symmetry to the Great Walk network, which would then stretch from Stewart Island to the cape.

The initial criteria for the new walk stated at least one walk must be in the North Island, so in theory, the Te Paki track should be a shoe-in. It would also help make the Great Walks more accessible to the huge population base north of Taupo (although it would still be more than a five-hour drive to the trailhead from Auckland, which is further than driving to the Tongariro Northern Circuit).

The spiritual significance of the area for Maori is also a drawcard.

The walk currently has no huts but has four excellent beachside campsites, and it’s conceivable DOC will make it a camping-only Great Walk.

The walk was very nearly not considered to be one of the next Great Walks. Last year, DOC called on the public for proposals and no group or iwi put forward Te Paki, but one person submitted a single paragraph urging the track be considered because there weren’t enough Great Walks in the North Island.

DOC will make a decision by the end of the year and open the new walk, or walks, ahead of the 2021/22 Great Walk season.