Wellington chef Joe McLeod is pointing to a shrub with red bark and crinkled green leaves in front of us.

“If you’re stuck in the bush with a headache and no painkillers, the red matipo is a great cure,” he explains. “Just grab some of the leaves and boil them in water and you’ll find yourself back to normal in no time.”

McLeod grew up in Te Urewera where foraging for bush kai and traditional Māori healing (or rongoā) are a way of life.

Today, as one of the brains behind New Zealand Foraging Day, an annual New Zealand Chefs Association event held in March, he’s giving Wilderness a basic intro to bush foraging during an hour-long walk in Wellington’s Gilberd Bush Reserve.

The reserve is special to McLeod.

Not only does it provide good views to iwi-owned and predator-free Matiu/Somes Island, it flanks a community marae, Ngā Hau e Whā o Paparārangi, of which McLeod is kaumatua.

As we join the track and start to zigzag downhill, McLeod points out the various edible plants, fruits, leaves and even bark that can be found simply when walking in the bush.

“It’s the wrong season for puha. But there’s always plenty of onion plant around,” he says, placing a handful of the stalks and white flower heads into a hessian grocery bag.

Next, he picks a fistful of lemonwood leaves, followed by several tree fern tips that he nips off the plants with his fingertips.

McLeod estimates around 30 per cent of what can be found in the New Zealand bush is edible. 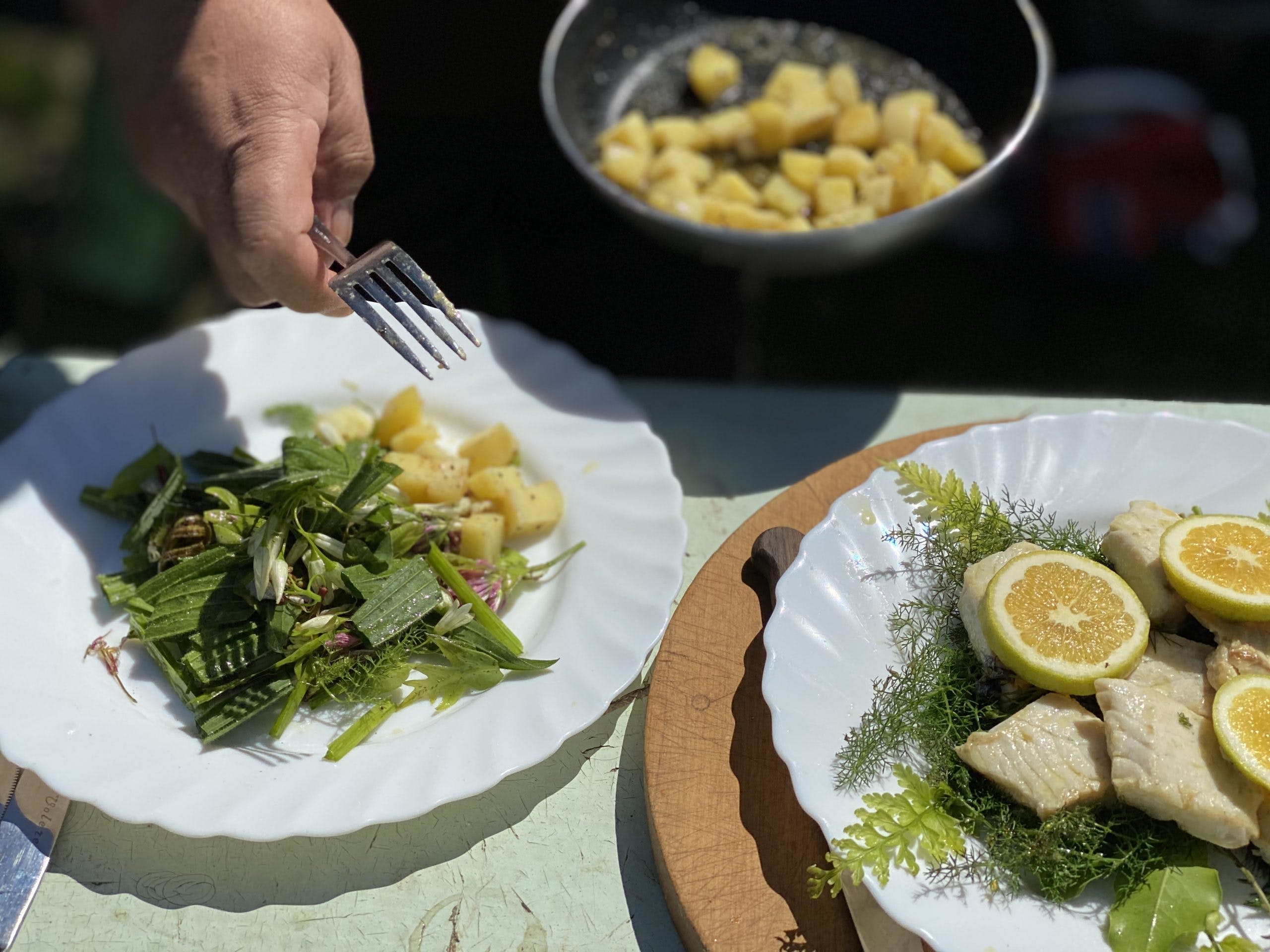 A fish lunch prepared with greens from the bush. Photo: Jacqui Gibson

“It’s an incredible forest we have in this part of the world. It’s safe for starters. No snakes or whatever. It’s abundant, too. I have a couple of uncles with the knowledge and fitness to live entirely off what they could forage in the ngāhere. It wouldn’t be easy, but they could do it.

“For trampers looking for something to complement your standard hut meal, there’s everything from the bulb of the giant para fern – that’s a great carbohydrate – to kawakawa leaves, which are good for tea. Horopito is popular with nearly everyone for its peppery flavour. The tips of fern leaves are a fresh addition to something a bit dull. Or, for the more adventurous, there are bush worms and insects. Our old people used to eat birds, of course. But that’s a no-no. We’re all guardians of our native birds these days.”

As we dawdle past two tiny, tightly-coiled pikopiko fern heads, McLeod tells me we’ll leave the juicy delicacies for the likes of top Wellington chef Monique Fiso, of Hiakai, who also comes here to forage.

For several years, McLeod has shared his knowledge of traditional bush kai with Fiso.

“She’s done an incredible job of using the knowledge of our old ways to elevate New Zealand’s indigenous cuisine and share it with a much larger audience. In a way, that’s my goal, too.”

McLeod is one year into a five-year doctoral study of traditional Māori cuisine at Te Whare Wānanga o Awanuiārangi in Whakatane. His study will combine what he’s learned from a decades’ long, international cookery career, many years of foraging and a lifetime of listening to and cooking alongside Ngāi Tūhoe kaumatua and kuia.

His ultimate goal is to document traditional Māori cuisine for iwi so they can revive their old traditions and pass them on to a new generation.

Back at the marae, with a quarter-full bag of bush-foraged greens, McLeod stands at an outdoor workbench to prepare a lunch of bush salad, poached snapper and lemon-infused potatoes.

Marae treasurer Harry Meinders, who is on-site building, joins us in the hot sun with cups of tea.

“Look, this is a great time of year to be foraging,” McLeod says. “The days are getting longer and warmer. Walking in the bush, you can see there are just so many tasty, new shoots coming through.”