Justin Amor recounts the adventure from his YouTube series Just Wild NZ that shows him climbing the highest peaks in the Tararua Range in search of an aircraft wreck on Shingle Slip Knob.

My attitude to life lies in taking opportunities that present themselves. The first big winter dump of snow on the Tararuas followed by a three-day high-pressure system, is certainly an opportunity I could not miss.

As I parked at Mt Holdsworth car park, the forecast was for -20°on the tops. I was swiftly at Mitre Flats Hut with only a couple of worms and a few berries for sustenance. (For all episodes of Just Wild NZ I forage for food as I go.) That night, I caught an eel in the stream and it made a tasty fire-cooked meal.

Next morning, I climbed quickly, nourished by two huhu grubs for lunch. Busting out onto the open tops was inspiring. The mind-blowing views and vanishing clouds gave me a real sense of accomplishment.

Would it be possible to camp on top of Mitre, the highest peak in the Tararua Range?

The answer came within a couple of hours as I watched one of the most amazing sunsets I have ever witnessed from my camp on the peak.

Next day, I was post-holing past Girdlestone in sometimes waist-deep snow. Approaching North King, I filmed a piece to camera, saying: “I have to take extra care through here…”. A moment later, my feet went from underneath me on the frozen knife-edge ridge. I engaged my axe just in time. Below was a 50-degree slide of around 1km. Without the axe, it would have been impossible to stop my slide.

I reset my nerves and carried on. 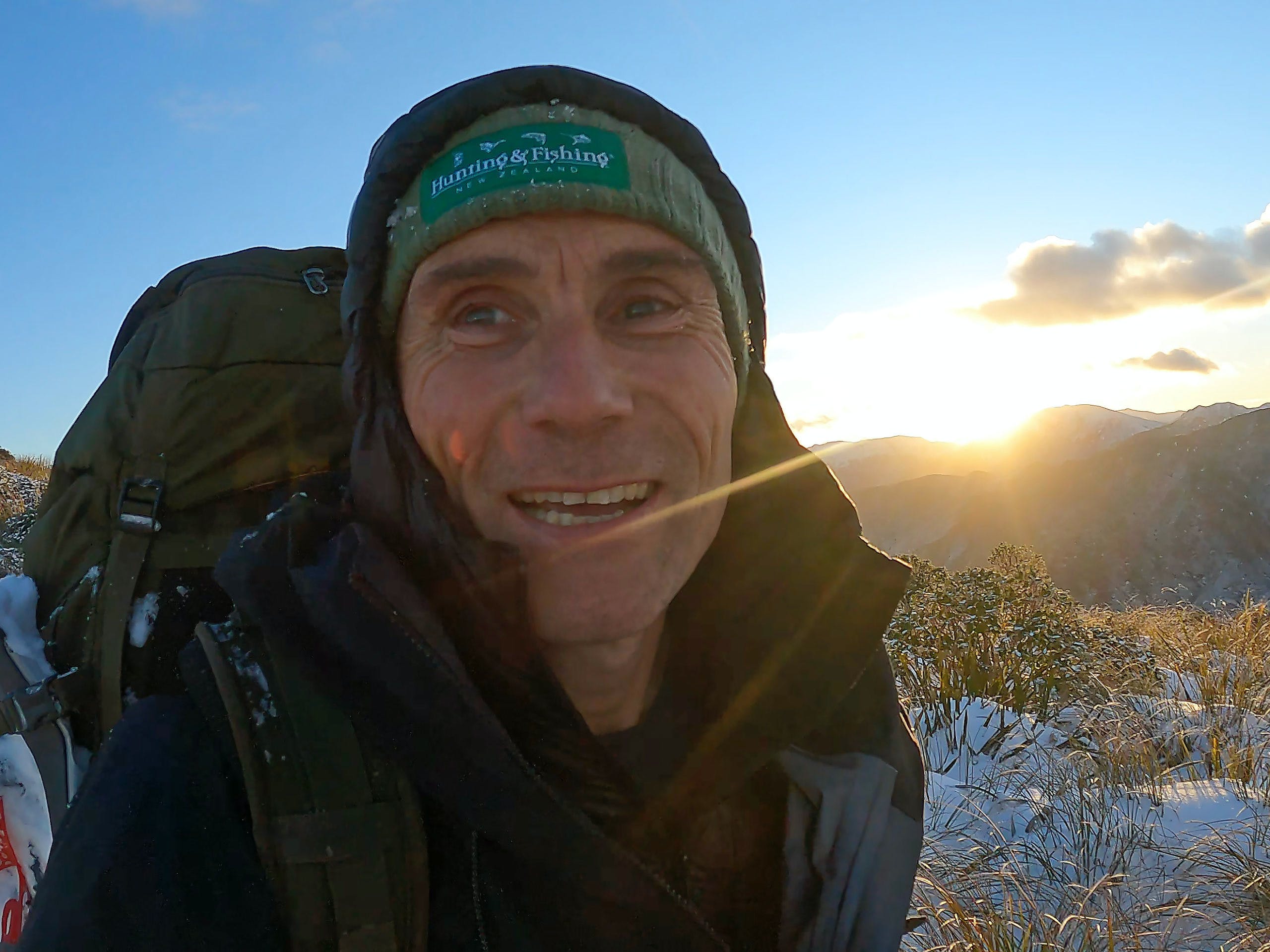 The looming Broken Axe Pinnacles leading to McGregor was daunting. In the dying light, the golden hour produced outstanding drone shots but made the task extremely dangerous. All my attention was spent concentrating on every foothold.

With minutes of daylight left, I completed the most dangerous section. The second the sun goes down everything becomes a blanket of ice. Even the knee-deep snow had a crust of ‘shine teasers’ raking my shins with every step, constantly testing my Rab pants.

On top of McGregor, with the weather still holding, I enjoyed another rare night on the summit of a Tararua peak. That I had only found a couple of snowberries to eat didn’t worry me; I was where I needed to be and the most exposed part of the journey was behind me.

It was now almost plain sailing to the aircraft wreck on Shingle Slip Knob.

The crashed plane was disjointed in sections but laid out uniformly.

With the last shots filmed and with fist pumps of celebration, I thought how wonderful life is.

Adventure is all around us; all you have to do is get the gear, get the mindset and get after it.