Redcliffe Conservation Area and scenic reserve were created in October 2009 as part of the tenure review process. The reserve encompasses the Redcliffe Stream catchment to the edge of Cookies Flat. From there the Hakatere Conservation Area covers most of the Mt Hutt Range and beyond to the Ashburton Lakes.

Our tramping party set off up the track from the road end with a chill in the easterly breeze and high cloud between us and the sky. We had left a wet and rainy Christchurch with the promise of fine weather relayed to us via the Mt Hutt web cam. The track is well marked as it wanders along the Redcliffe Stream terrace then joins an old dozer track. Matagouri gave way for regenerating mixed shrublands and kowhai groves showing the first signs of flowering. There are remnants of beech and mixed hardwood species on the west side of the stream. 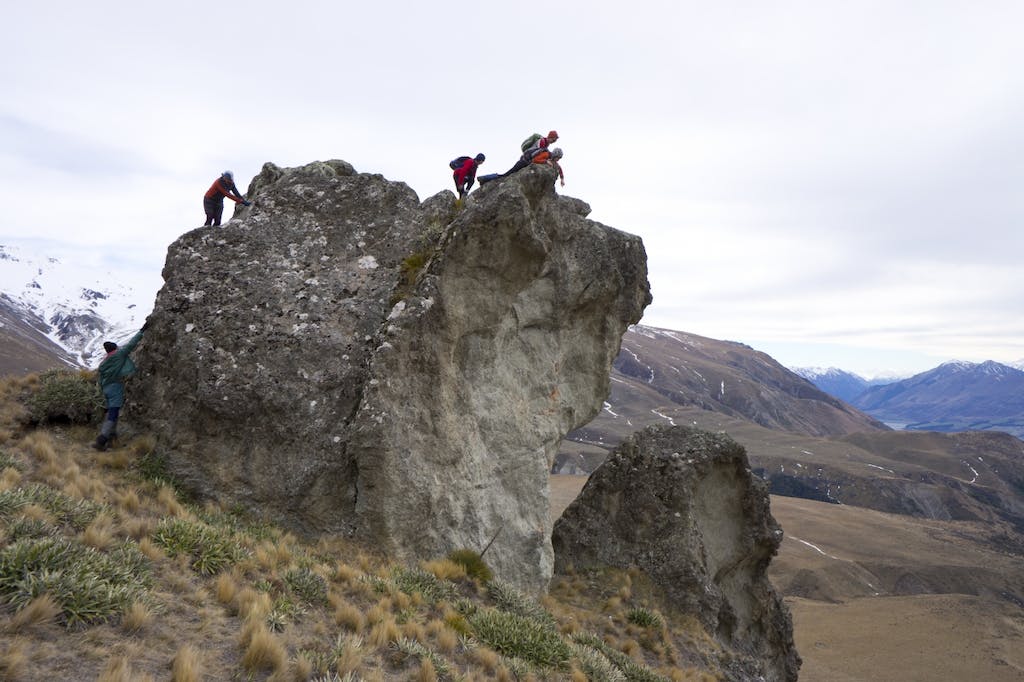 Dog Rock is a worthwhile climb on the way up Rat Hill. Photo: Supplied

The track heads up the Jack Stream confluence and over a low saddle before dropping back to Redcliffe Stream where the dozer track ends. We then climbed along a fenceline to meet the stream in the upper reaches of the reserve after gaining almost 500m from Rakaia. This is at the north end of Cookies Flat looking east to our destination, Rat Hill, and behind it the snow-topped Mt Hutt Range.

Rat Hill doesn’t live up to its infested connotations and proves not to be a rodent of a climb either. It’s relatively open with short grass on the lower slopes making it easy for short legs to climb. Some large rocky outcrops about half way up provided some impromptu rock climbing practise for the kids. Short tussock and cotton daisy with a little matagouri and cassinia dominate the upper slopes, with prostrate woody native shrubs including dracophyllum amongst the south-west facing scree and bare rock slopes.

When we reached the tops we put our windproof gear on to protect against the cold breeze blowing in straight off the snow. We sheltered beside a sub-summit rock while we ate lunch.

We crested the ridge and trudged along the open snow-drifted tops to the 1450m summit. Here, is a view with Lake Coleridge over to the north dissected by a hill pushing out from a patchwork of fields and shelter belts on a high terrace way above the far side of the Rakaia River. To the west, the entire length of the Black Hill Range stands out against the steel grey sky, sporting snow tops and basins suitable for cross country skiing.

Below, the most distinct feature of human endeavour was the two straight lines dissecting Cookies Flat and Redcliffe Saddle, which define the Redcliffe and Swift Stream catchments. We continued south from Rat Hill, descending to Tribulation Hut at the south end of Cookies Flat. This diversion added more than hour onto the tramp.

Tribulation Hut is a basic six bunk hut and has been reconditioned by DOC. Below the hut the Swift River has cut a deep gorge into bedrock. Its sides are steep and rugged with a rich variety of subalpine shrubs, totara trees, and exposed rock stratification. The riverbed is quite narrow with rapids, deep pools and a natural rock arch bridging the river. It’s a great place for a swim in summer.

This is a great beginner-intermediate tramp with the option of a night in Tribulation Hut and further exploration up and down the valley.