Access
From Auckland via plane or ferry. Track begins and ends on Whangaparapara Road with the entry and exit points a few kilometres apart.

Tranquil harbours, white sand beaches and a rugged mountainous interior. These form the essence of Great Barrier Island, also known as Aotea by its original Maori inhabitants. Two decades after my last visit to the island, it was time to return with my friends and our young sons.

The initial part of Aotea Track follows an old tramline which was constructed and operated by the Kauri Timber Company between 1925 and 1941. Logs reaching the end of this tramline were railed to Whangaparapara before being towed by steam tug to the KTC sawmills in Freemans Bay. The tramline is an easy uphill grade through bush which is dominated by large numbers of mature nikau palms before intersecting a forestry road which leads to Kaiaraara Hut. The forestry road route is relatively uninspiring but does have two impressive side trips. One of these is the steep side trip to Maungapiko which gives outstanding views over the west coast of Great Barrier stretching away towards Little Barrier Island. The other leads to two massive kauri trees, remnants of the huge kauri forest that once existed here. 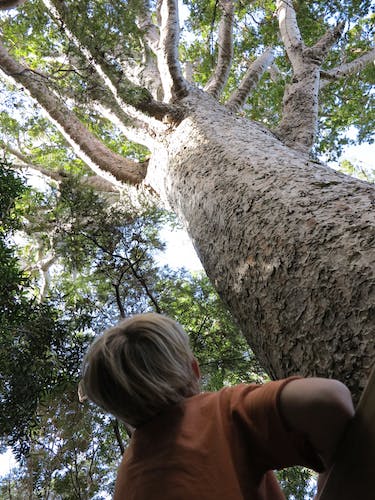 Kaiaraara Hut is located in the bush but is close to an inlet of Port Fitzroy Harbour. After a quick dip in the nearby stream, we walked down to Bush Beach in time for the sunset. We arrived just in time to watch the sun sinking behind the hills across the harbour. This was a truly tranquil place and we lingered to watch the stars appear and the boat lights flicker on.

An early highlight of the second day was the remains of New Zealand’s best preserved kauri driving dam. Built in the 1920s, this structure was used to send kauri logs crashing down to the harbour. The results of this process are still visible in the form of a sediment fan at the mouth of the stream; seen as you climb higher up the track.

Climbing higher brings spectacular views out towards the west coast with Little Barrier Island dominating the horizon. Staircases take over as you get nearer to the summit of Mt Hobson (627m) and become steeper and narrower the higher you climb. On the summit, a brisk westerly wind was offset by the warm sun and we enjoyed a leisurely lunch before descending and taking the turn-off to Mt Heale Hut.

Only two-years-old, Mt Heale Hut is perched at the head of a valley which falls away towards the west coast. The decks have been built with the views in mind and provide an ideal place to while away a few spare hours with a good book. Another great sunset was enjoyed from the deck, and as we sat there a solitary kaka flew overhead, giving its mournful screech as it flew from one side of the valley to the other.

Since the summit is only a 30-minute walk from the hut, some of us decided to head up there for dawn. Awaking to a leaden, spitty sky we decided to go anyway. As we walked swiftly along the boardwalk, we came across two black petrels beside the track. The black petrel is a sea bird that was once widespread across the North Island but is now confined to Great Barrier and Little Barrier islands. Mature birds spend months flying across the oceans, venturing as far as South America, but return to these islands to breed. A third one further along the track was in its burrow and let us know in no uncertain terms that we were not welcome.

Reaching the summit we found it to be cloudy and windy, but the racing clouds parted from time to time to give views around the island. We headed back to the hut an hour later and started packing for the walk out.

The highlights of the last day were the views out to the distant white sands of Medlands Beach followed later by the Kaitoke Hot Springs. A soak in a hot pool is a priority at the end of our tramps, and a natural hot spring only one hour from the end seemed custom made. This was one of the advantages of doing the track in the opposite direction to the DOC description and was a great way to finish off.