Dennis Radermacher’s  article ‘A Tarn Fine Spot’ (December 2014) and it’s equally compelling photograph reminded me of an issue that has perplexed me for a long time now.

While a single man with a bivvy bag, camping in such idyllic spots did not clash with the ethos of ‘leaving only footprints and taking only photographs’. Now a married man with two children, I wonder how indeed is the best way to pitch a tent in a fragile alpine environment without compromising the tent’s security or the plant life that has taken so long to develop in these stunning areas? Shifting rocks onto guy lines does not seem enough for a tent in potentially high wind areas. Perhaps this could be the topic for a future article?

Thanks again for bringing back memories of days walking the tops and refreshing a dream to take the next generation to some of our stunning alpine secrets. 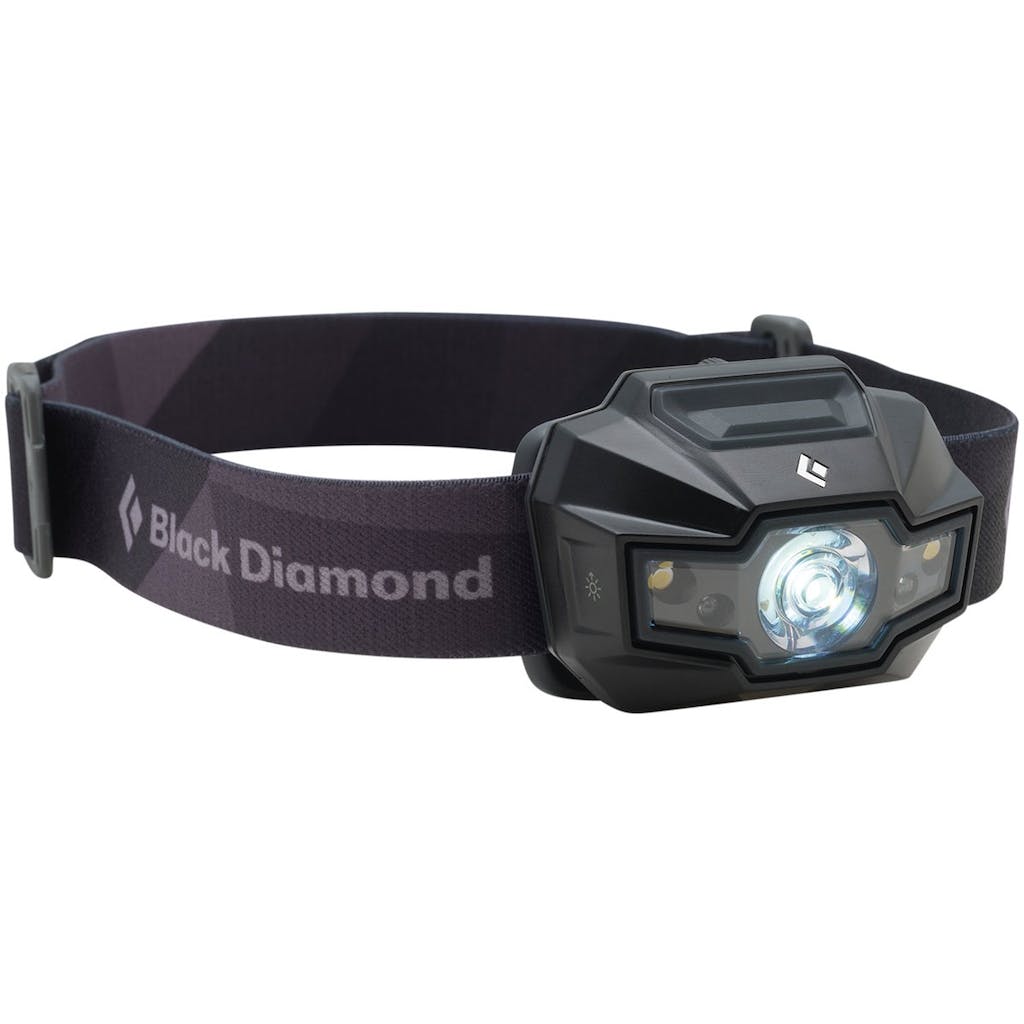 – Nick receives a Black Diamond Storm headlamp worth $89.90 thanks to www.bivouac.co.nz. Readers, send your letter to the editor for a chance to win.

On the NZ Topo50 series, the symbol described in the legend as indicating ‘cliff, terrace, slip’ is, in my experience, used frequently for sloping tussocky embankments between flat terraces, but seldom for sheer cliffs of exposed rock. The latter are usually depicted simply by the confluence of contour lines, sometimes a great many of them!

To me, this approach seems misguided. Vertical rock faces are not only more obvious features from the ground, they are also infinitely more important in planning a route. I appreciate that a criteria of magnitude would be needed, to limit the symbol’s application, but this is no great obstacle.

Discernment between streams and mere rills is commonplace both in cartography and map reading in-situ. This can be confusing, but certainly less so than when over 60m of exposed vertical rock has not had the symbol for ‘cliff’ applied to it, such as I discovered was the case in the Kea Basin on a recent trip.

I would like to hear from a cartographer who might explain some method in the apparent madness – or perhaps this could be considered in future editions.

I enjoyed the monopoly story ‘Fast deals and bankrupt trampers’(December 2014) and thought this photo would be of interest. It was taken at Blue Lake Hut in Nelson Lakes National Park in February 2012.

Someone before us must have been held up in poor weather and used their time to be creative by making a Nelson Lakes Monopoly board. The little stones in the pot lid were the houses. 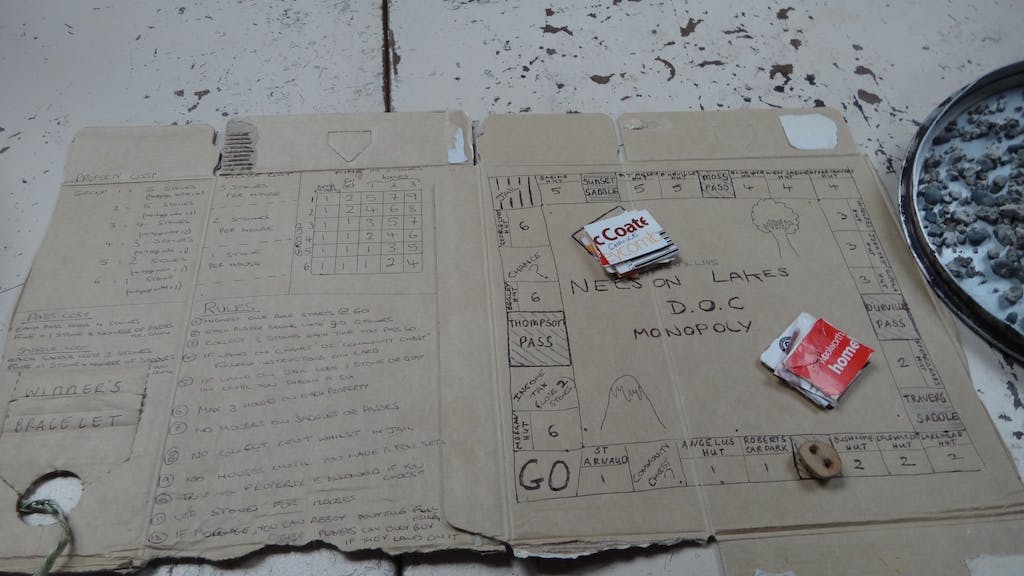 With a perfect weather forecast and no family commitments, I was gone: Gouland Downs Hut on the Heaphy Track at the end of the day. Roaring fire, listening to kiwi calling and feeling as though I could touch the stars.

I first tramped the Heaphy in 1972 and it was very muddy compared with the beautiful, graded dry track it is now, along with its million dollar huts and bikers for companions. Congratulations to DOC for its continued focus on progressing the Heaphy to make it such a pleasurable and stunning experience.

What is it that keeps us wanting to return to the wilderness? Spiritual, social, personal, physical, historical, recreation, flora and fauna? No doubt many other reasons can be added to the list. What are the core values of wanting to protect our natural environments? Respect, sustainability, cross-cultural, non-confrontational, honesty. Again, I am sure, this list can be added to.

I would like to say a huge thank you to all those people on the ground in progressing and implementing these values within Kahurangi National Park and in making mine, and many others’, a more intense, enjoyable, memorable and exciting experience.

We recently walked the Rakiura Track on Stewart Island. One of the highlights was a friendly kaka. They have ambidextrous feet, just like hands! 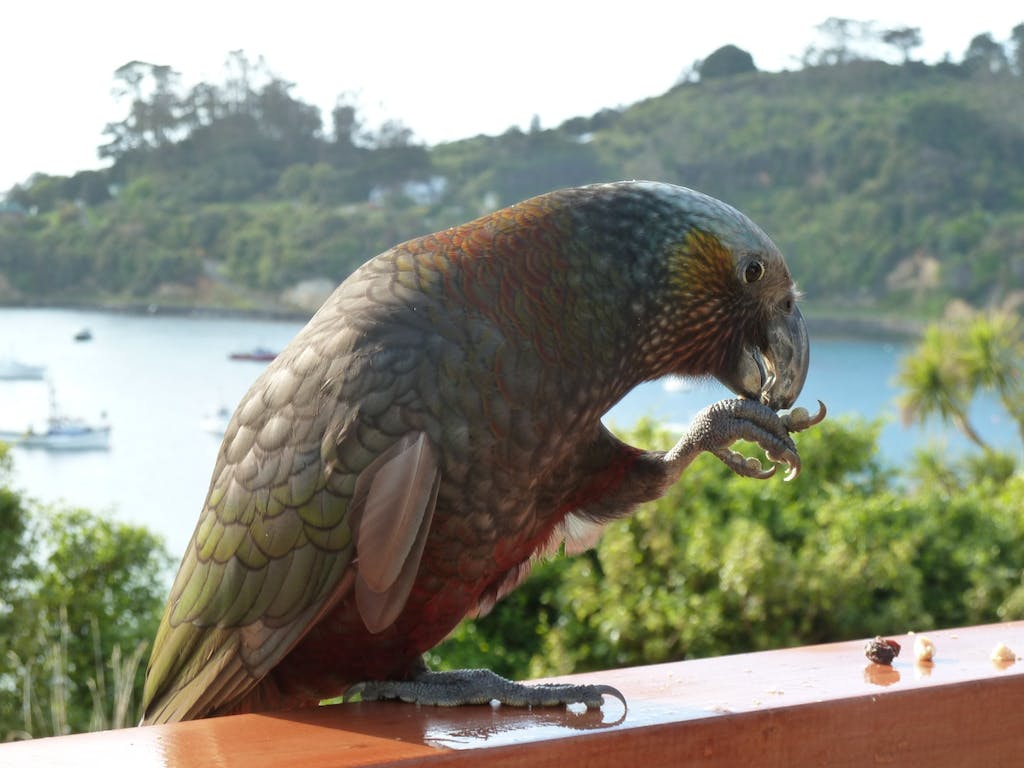