Climbing a mountain, gaining the tops, or strolling along a tussocky ridge all rank highly in most trampers’ agendas. We like expansive views, with that sense of ridge after ridge receding into the distance. But perhaps an equally rewarding experience is that of reaching the head of a spectacular valley.

In New Zealand, many valleys have been shaped by retreating glaciers, which have left exquisite cirques surrounded by peaks. While lacking the expansiveness of a ridgetop, the hemmed-in nature of the surrounding bluffs gives that paradoxical sense of being tiny and insignificant, yet somehow still exultant. Here are five of the best valley-heads. 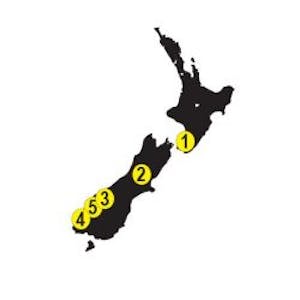 Pioneer tramper Leslie Adkin was the first to suggest that some of the interior valleys of the Tararua Range may have experienced past glaciation. A hanging valley beneath Arete in the head of the Park River first caught his attention, and he wrote papers about his glaciation theory in the early 1900s. Initially, his ideas met a stony response from the scientific community, but today most accept his theory. The Park is undoubtedly an impressive valley head, best reached from the Te Matawai Hut and Pukematawai. Those walking Te Araroa have tantalising glimpses of it from Butcher Knob.

In just over an hour’s tramp, you can be gazing at the impressive Otira Face of Mt Rolleston, one of the highest peaks in the national park. Few such remarkable valley-heads are reached on such an accessible walk, which begins near Arthur’s Pass itself. The well-worn track sidles above a gorged section of the Otira  River to reach a footbridge, where a cairned route continues to the valley head (the latter prone to avalanches after snow). In early summer, Mount Cook buttercups bloom prolifically.

The Kitchener Cirque is without a doubt one of the most spectacular places in the Southern Alps; a vast array of bluffs and ledges, split by the 370m tumbling tumult of the Turnbull Thomson Falls and flanked by Kitchener and Hood glaciers. Reaching the valley involves a relatively easy overnight tramp, beginning up the East Matukituki River (which needs to be forded at Cameron Flat). A 3-4hr tramp leads to Junction Flat, where the Kitchener Track heads up the Kitchener River to Aspiring Flats. Here, the Rock of Ages bivvy rock offers shelter. Camping spots exist in places too, although the flats can be swampy.

Beginning from the Lower Hollyford Road, the track to Lake Marian climbs steadily but not too steeply. It passes a gorged section of Marian Creek, to emerge above the bushline at the edge of the bluff-ringed  Lake Marian. It’s an excellent introduction to Fiordland walking (allow 3hr return).

Those wanting a tougher Fiordland trip can tramp up Moraine Creek, which drains some of the most formidable faces in the Darran Mountains. Beginning from the Lower Hollyford Road, a marked track climbs through forest to reach Tent Flat. Beyond, it’s a route only, marked by sporadic cairns to the shores of Lake Adelaide. A hut which once occupied the valley is long gone, but above the lake there are two rock bivs, Gill’s and Phil’s, both named after climbers (Mike Gill and Phil Herron) who made their mark in the area. Black and daunting, the north faces of Marian and Sabre peaks make for an incredible spectacle. The whole route takes 9-11hr each way, and shouldn’t be attempted in poor weather.