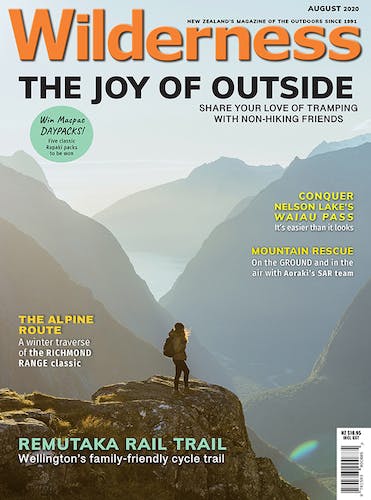 Read more from the
August 2020 Issue

Read more from the
August 2020 Issue

Imagine you’re climbing a clagged-in slope at dawn, headlight on, eyes scanning for the next track marker when all of a sudden the clouds begin to thin. Moments later, you ascend above a sea of white into clear blue skies. As the sun rises, the surrounding peaks – prominent as bald swimmers in the ocean – start to glow, as the clouds turn from peach to gold below.

This heavenly weather phenomenon, known as a temperature inversion, is a much sought after spectacle amongst mountain-goers and photographers. To see one for yourself, you first have to understand how they form.

As trampers will have experienced, air temperature tends to decrease the higher one climbs due to the lower pressure of air at altitude – think how pressured air heats in a bike pump, while a deodorant aerosol cools as it loses pressure.

As the earth is heated by the sun, the ground warms the air, which rises – losing pressure and cooling as it gains altitude.

Since this is considered to be the normal state of the atmosphere, a temperature inversion is the opposite and occurs when this gradient is reversed, and air, cooled by low ground temperatures, sinks and gets trapped below a belt of warmer air.

As the ground cools at night, it sucks the temperature from the air, creating a cold layer above the earth’s surface.

This drop in temperature can create katabatic, or drainage, winds, which pull higher density air down from the surrounding landscape.

As this air cools, moisture can condense into clouds, which are effectively ‘pinned’ to the valley bottom beneath warmer air.

Low clouds may dissipate quickly once the sun has risen, so trampers will have a better chance of seeing the phenomenon if they’re up before sunrise.