Would you be brave enough to take your toddler on a 14-day backcountry adventure? Michaela Crockford-Laserer did and has no regrets

“You guys are crazy!” would usually be the first thing people said after we told them our plans to spend two weeks packrafting and hiking the Hollyford-Pyke loop in Fiordland with our 16-month-old daughter Maya.

But we didn’t feel it was crazy at all: my husband Seon and I have experience in off-track travel, and we both have wilderness first responder training, so we knew how to prepare for the trip and make ourselves – and our daughter – as safe as possible.

We’d be covering 144km on land over at least 10 days. We had a secret weapon: an Alpacka packraft, which one of us would use to paddle our heavy packs while the other walked with Maya. Speed was not our goal. We wanted to enjoy the journey and spend our time exploring the area.

Above all, we wanted to share the natural world with Maya and in the process rediscover the simple joys of being in the outdoors, as seen through her eyes. It’s inspiring to watch how, with never ending curiosity, children explore every pebble, tree and stick with a sense of wonder.

Selecting the right gear for Maya was a big part of our preparation. Because she sleeps better in a tent than in huts, we decided to camp for most of the journey. She would sleep on a pack stuffed with soft clothing, and in a down-filled onesie – like a sleeping bag that stayed on her no matter how much she wriggled around during the night. We found a brand of biodegradable nappies that could be buried and would decompose naturally.

Soon after starting the trip, Seon launched the packraft and paddled the Hollyford River with our packs while I carried Maya. At times, all three of us would float in the packraft, but when the rapids became too technical, Maya and I would return to the track. Over the next few days, the Hollyford wound its way down-valley, between high mountains and glacier-topped peaks. Across massive Lake McKerrow, the current took us closer and closer to the sea and Martins Bay.

At first it wasn’t easy to find a good rhythm that worked for us all. In the mornings, when we were ready to jump into the packraft, we would suddenly notice that time had flown by and Maya was hungry again. It also took time to find a comfortable position in the packraft, so she could sleep on my lap while we floated down the river. Things quickly turned ugly if these basic needs were not met.

At Martins Bay Lodge, we picked up a box of food that we had arranged to have flown in. Just as our packs were starting to get a bit lighter, they got weighed down again. But having plenty of food gave us the freedom to take our time and the option to stop at all the beautiful spots we came across.

Seon debated whether to hike or paddle the coast to Big Bay. On the ocean, a change of wind or swell could put his life at risk. It was out of the question to take Maya out to sea, but if Seon could paddle most of our gear to Big Bay, it would make the hike much easier for me. 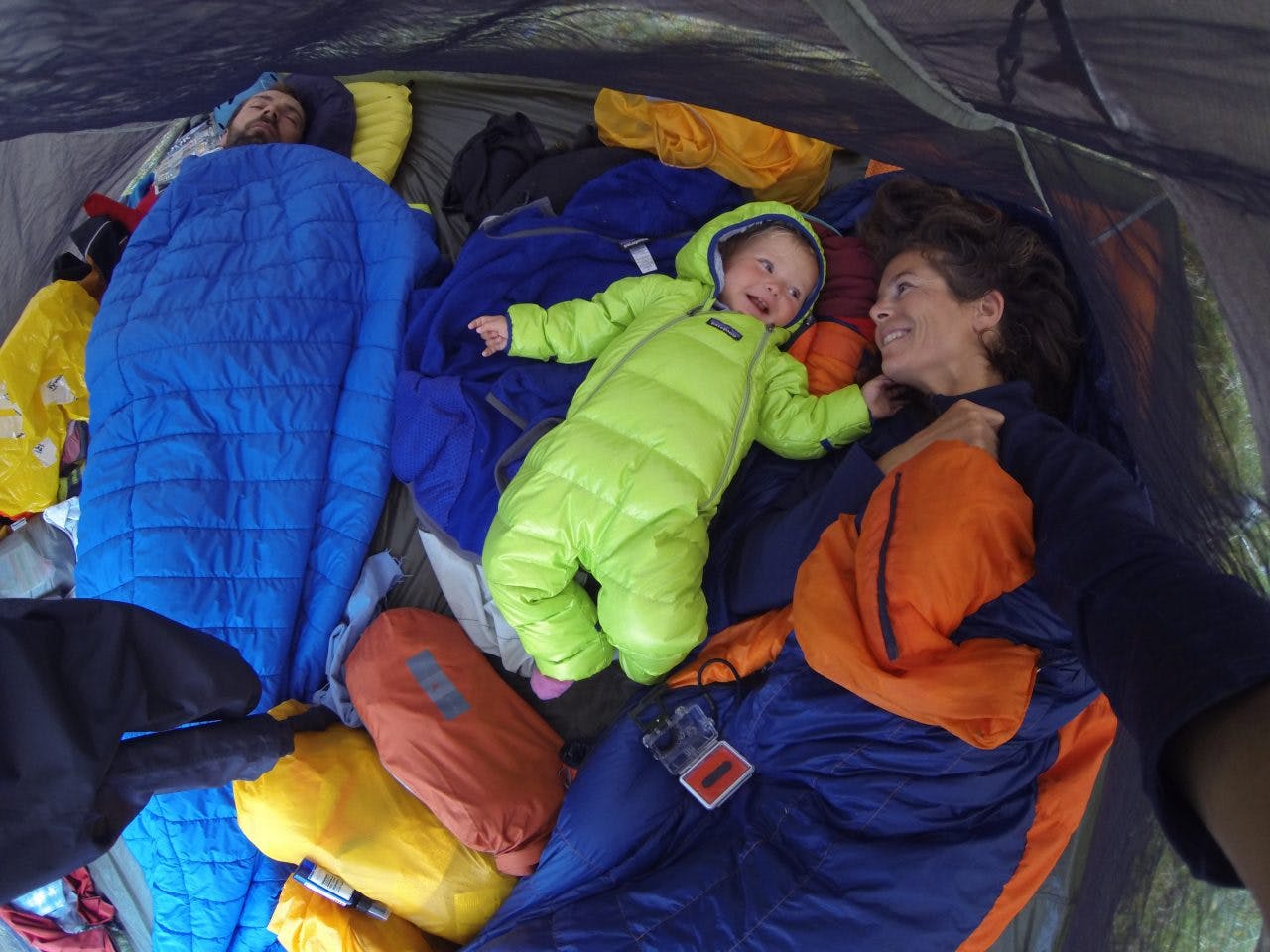 Maya slept in a down-filled onesie

Fortunately, the conditions were near perfect, with only a slight swell and a light onshore breeze. Maya and I watched him from the shore, a tiny speck paddling through the breakers. It wasn’t long before he was well ahead of us.

We met again at the beginning of Big Bay and walked along the beach for the final few kilometres to the hut. Carrying Maya, the packraft, and our gear was a mission – we would stop every 20 minutes to give our shoulders a rest. Add soft sand to the mix and it was the most physically demanding part of the trip.

Big Bay Hut was empty, a nice change from Martins Bay where we also experienced a near constant drone from helicopters. Though less scenic than Martins Bay, the solitude and quiet at Big Bay made it much more enjoyable.

During the next few days we explored the surroundings and even went surfing, thanks to Warrick Mitchell from Awarua Guides. He offers surf and wilderness adventures in Big Bay, where he lives most of the year.

The leg from Big Bay to Pyke River is overland, so we had no choice but to shoulder our loads and hike. With barely any elevation and a reasonably easy trail to follow through lush forest, we made good ground but stopped frequently when Maya wanted to test the trail and have a closer look at mud and sticks.

The difference between the Hollyford and Pyke trails was obvious. Where the Hollyford was busy and noisy, the Pyke was deserted. The trail was said to be much rougher too, but that didn’t bother us as we spent most of the time gently paddling the Pyke River. When we reached the Hollyford River, we pulled the packraft out of the water and walked slowly over two days back to the road end.

It was an unforgettable trip, challenging at times, but uncomplicated and lots of fun. Now the question is whether we could do a longer trip. Maybe even a thru-hike. The possible destinations and routes are already running through our minds.