Naresh Kumar overcame excruciating pain, persistent possums and being swept away by a torrent to become the first to complete the Te Araroa Trail in sandals

For most who complete the Te Araroa Trail, the journey starts and ends at either Bluff or Cape Reinga. But for Naresh Kumar, the journey started in Chennai in 2001 and finished at the Reading Cinema in Invercargill.

The 32-year-old has dreamed of living in New Zealand ever since he saw the first Lord of the Rings movie.

“I saw the movie and thought, what is this place?” recalls Kumar. “I was like a teenage girl at a Justin Bieber concert.”

Last year, his dream came true when he was granted NZ residency. But before settling down to a full-time job in IT, Kumar wanted to run and walk the full length of the country, determined to finish in time for the opening of the final Hobbit movie. This gave him just 90 days to complete the trail; a challenge he accomplished with three days to spare.

Despite his quick time (it usually takes around 120 days to complete it), there were terrifying moments on the trail. The first was a river crossing over a swollen Waipapa River in Puketi Forest, Northland. The river swept him off his feet and took him 3km downstream.

“I had to stop treading so as not to get my feet caught in debris,” he says. “At the same time I needed to get to the other side. I eventually felt shingle under the water and I could grab hold of the bank at the other side.”

Kumar felt uneasy about the crossing beforehand and even wrote a ‘death note’ to his parents in case he didn’t make it across.

After escaping the river, Kumar set up camp in the forest, only to be awoken in the early hours by an army of possums. “It was like someone had decorated my tent with Christmas lights. Their eyes glowed as they looked at my tent.

“One of them was trying to get in, broke my tent pole and the tarp landed on me. I thought ‘all I’ve been through today and now I have to fight these possums in the rain!’.” 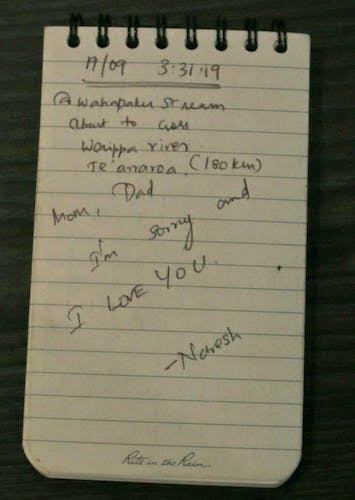 The ‘death note’ Kumar wrote for his parents before crossing the Waipara River. Photo: Supplied

The lowest point of all was descending to Camp Stream Hut from Two Thumb Range, Canterbury, in colossal winds. “Every time I stood up, the wind pushed me over.” At one point the wind pushed so hard, Kumar landed in a stream, badly spraining his foot. “I couldn’t bear the pain,” he says. “I couldn’t eat when I got to the hut. I just popped ibuprofen and went to sleep.”

For Kumar, the real challenge had now begun. Instead of waiting two weeks for his foot to heal, he decided to carry on through the pain to reach his target. “You learn more about yourself when the challenge becomes real,” he says. “No-one’s behind you with a gun forcing you to walk. You can always throw in the towel, but you need to ask how much you want it. That will define how much you push.”

If bloody mindedness was part of the reason Kumar succeeded, then spirit-lifting generosity from strangers was another. He has countless tales of kindness from people he met along the way.

Kumar arrived in Pataua, on Northland’s east coast, having already run 58km that day. It was dusk and the wind was howling. Dreading the thought of putting up his tent, he decided instead to sleep on the floor of a public toilet. As he was contemplating this, a local man came over and, within minutes, Kumar was sitting in his Jacuzzi, drinking beer and watching the sunset. “He then took me to his friends’ house and they kept pouring red wine and feeding me fine cheese. Then the guy made me the best beef stir fry I’ve ever had.”

Similar random acts of generosity were frequent on Kumar’s trip. He made many friends and wasn’t short of offers for Christmas dinner. He’s also become something of a celebrity since completing the challenge. Being 1.93m with a long beard, longer hair and yes, those sandals, he’s instantly recognisable. In fact, our interview was frequently stopped by people wanting to shake his hand and wish him well.

The sandals are what captured media attention. Made by Bedrock in California (read our review of Bedrock sandals), the first pair lasted 1800km and the second pair are still in good shape, having seen him through the final 1200km.

“I often get blisters when running in shoes,” he explains. “So I always wear sandals for runs now.” Kumar didn’t even let a blizzard at the top of Waiau Pass, in Nelson Lakes, change his mind, though he does wear socks when traipsing through snow.

“I also wore bread bags at Waiau Pass so my feet didn’t get wet.”

Having seen a cross-section of Aotearoa, his favourite place is the Tararua Range. “I was on the ridgeline and on one side it was a beautiful sunny day, while on the other side the mountain was blocking massive clouds like a dam, and you could see them spilling over the top. It was a freezing day, the tussock was frozen with icicles and, as sun rose, the icicles melted and shattered like glass over the floor. It was like listening to an orchestra.”