When it comes to tramping on Stewart Island, you’re better to make the most of your time by walking the North West Circuit, writes Marayke Bouma. Who knows, it might give you a taste for long trails.

My boyfriend Will and I are cheapskates. Aspiring latte enthusiasts maybe, smashed-avo hopefuls, but stressfully saving for a house. We still have that penny-pinching student mindset ingrained in our wallets.

We’re also keen trampers. So when we saw a photo of Stewart Island’s golden-sand beaches in Wilderness, we felt ourselves drawn south to the wee dot that gets forgotten from maps; the anchor to Maui’s waka. A place where kiwi wander during the day and the mud comes up to your thighs.

But why spend $200 on flights for a three day Great Walk? We wanted our money’s worth. We’d walk 13 days around the North-West circuit and be home in time for work on Monday. We’d dehydrate our own food, borrow a PLB, steal a sleeping bag from the parents, carry our old fly and bivvy bag instead of splashing out on a real tent. Safe, but hearty. Hearty, but cheap.

It was to be a heck of a step up from our usual ‘weekend warrior’ status. The longest we’d tramped before was four days. We’re the type that crowd the huts on long weekends and drive hours out of Auckland for a taste of wilderness at any free chance.

So, to be honest, I didn’t think I’d make it. Thirteen days is many. Or more accurately, 13 days of food is heavy.

Those first few days tested our bodies. Just as it takes an hour or so to warm up into walking each morning, it seems there’s a long-term equivalent. Your feet remind you how tight you like your boots laced, and where you need blister tape. Your back reminds you not to pack with the hard edge of the gas canister poking into you. And most of all, your legs remember how to walk, walk, and keep walking. 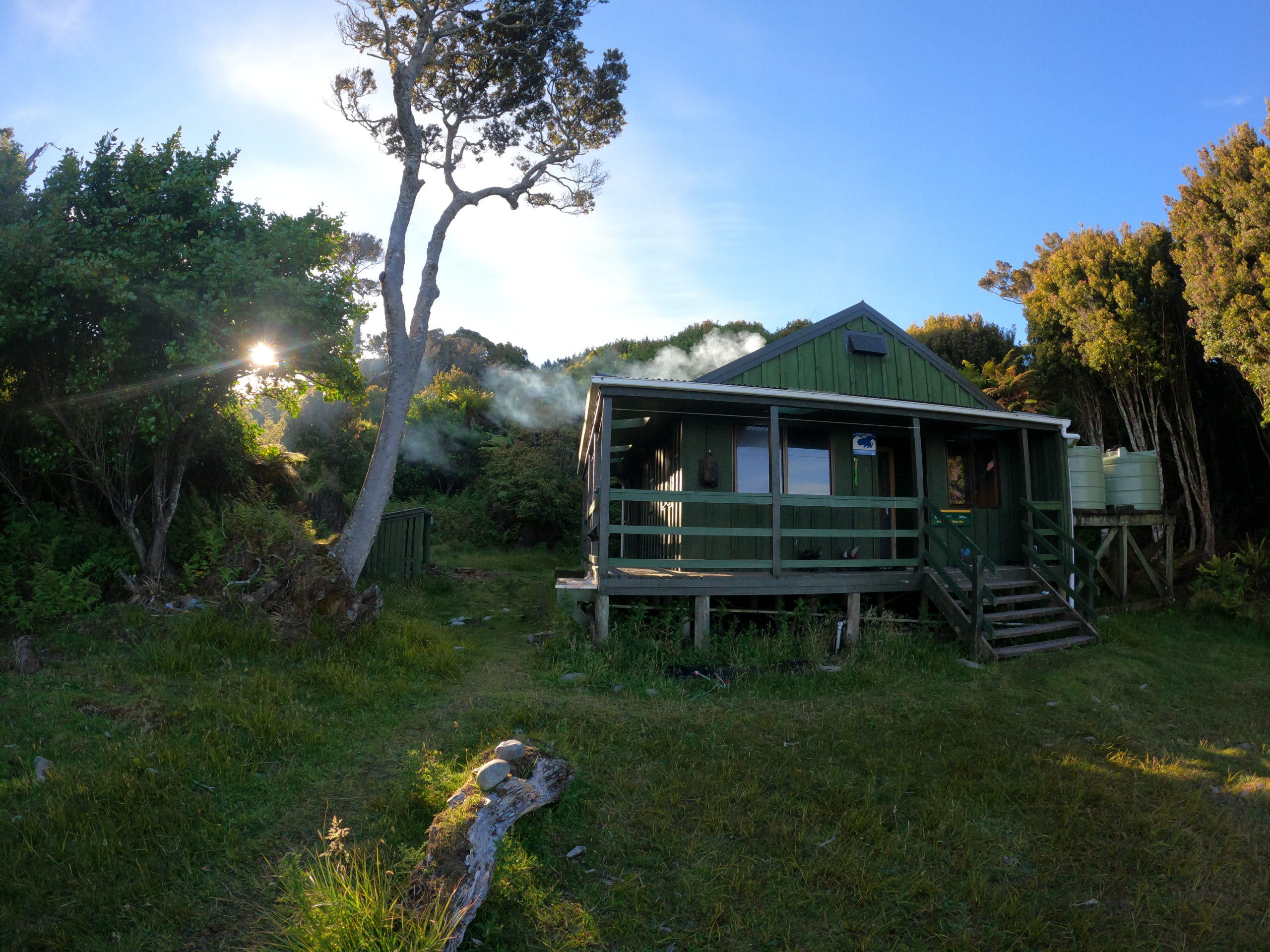 But at the same time, we were in absolute awe. Red rata flowers blanketed the track which was lined with a lush forest of crown ferns and rimu. Idyllic golden sand beaches gave respite from the forest walking.

After leaving the Rakiura Great Walk, we immediately hit the real mud. Thick and black, there was no point avoiding it; you just have to get grubby. I’ve never been more grateful for my gaiters.

We stayed an extra night at Christmas Village Hut to climb Mt Anglem/Hahanui. At 6-7hr, it was our longest yet, but there’s nothing like leaving packs at the hut and the feeling of freedom that gives. From the summit, we could see our future: eight days of track stretching out before us.

After Christmas Village, we felt fitter. We found our rhythm and settled into a routine taking turns digging out lunch or dinner, so our packs lightened at a similar rate. When the salami and pita ran out, we switched to tuna and crackers. Muesli bars and bliss balls were rationed. Favourite meals (spag bol and Thai green curry) were saved for the big days.

After day six, the test was not on our bodies or our preparedness, but our minds. While the views were stunning and we passed through a variety of terrain, ultimately walking is just walking. Will would be in his own world, so I was left entirely to my own devices. There’s not much to focus on other than not tripping over. My clumsy feet and the rough trail kept me occupied. Navigating the different textures of mud, avoiding roots, climbing vertical-feeling hills – this was my full-time job. The focus and repetition almost become meditative.

I think this is one of those things that keeps trampers coming back, despite the hills and blisters and heavy packs. That sense of calm: nothing to do but keep going.

There were days where it all blurred together, where the hours flashed by quickly. Oh, it’s lunchtime already? Woah, that kiwi sniffed my boot! And other days, the minutes ticked by lazily.

Usually, we could track our progress on the map via distinct ridges or beaches, or even 200m high sand dunes. But there was one particular day that felt endless. It all looked the same; unmarked streams seemed the same size as marked ones, hill after hill felt the same gradient. For two hours I expected the hut to turn up right around the next corner.

We were alone for most of the trip. A blessing and a curse, I think. Cheapskates like us don’t have Kindles for lightweight reading material. And playing cards between two people gets old pretty quick. We scoured every half-ripped National Geographic and Wilderness magazine left in huts. Our tiny flask of whisky was savoured on one long afternoon in a hut. 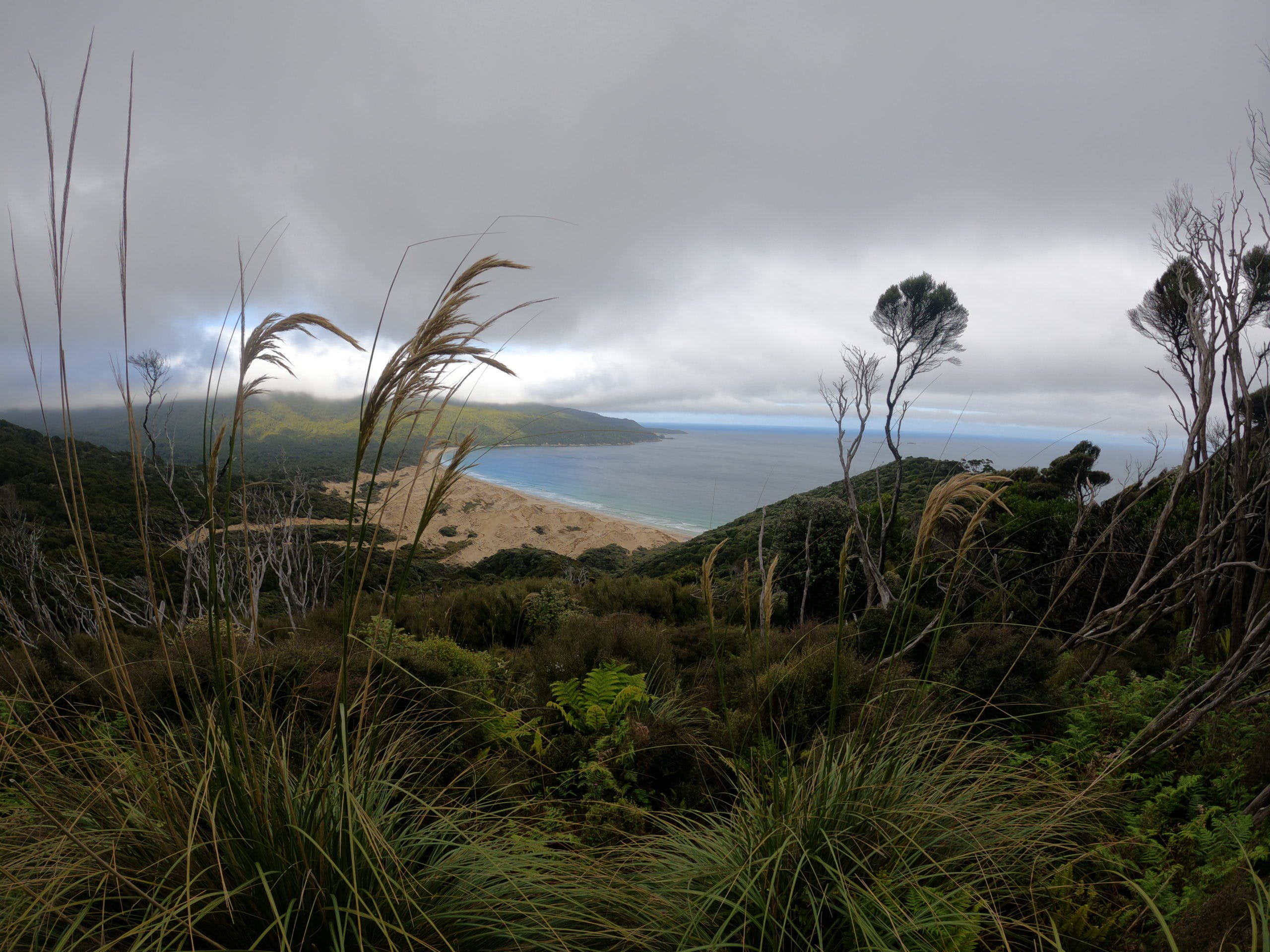 So we welcomed meeting some fellow ‘NWCers’ (as hut book entries described those walking the circuit) after our rest day reading a trashy murder-mystery at Big Hellfire Hut. One girl walking solo behind us had a small bag of dice – genius! – and taught us Yahtzee! The other couple entertained us with curious vegan meals. Later, we met a DOC ranger who told us about a sea lion interrupting his team’s lunch on the beach, like a bull in a china shop.

By day nine, two-thirds done, my doubts had dissolved and our packs were starting to feel light; as if we were just off for a long weekend mission. Though what is a tramp without a little bit of hard yakka? From here, came the test of our skills and safety as trampers.

Walking from Big Hellfire Hut to Mason Bay Hut was a 6-7hr day. We were feeling good and raring to go. We knew crossing Mason Bay depended on the tide being out. The high-tide route was ‘to be avoided’ at best, or ‘shockingly awful’ at worst, according to hut book entries. You can see where this is going… We arrived at the edge of the bay to see the waves already crashing on the small headland we had to get around. I counted 15 layers of wild, huge waves tumbling on top of each other. Stunning, but terrifying. 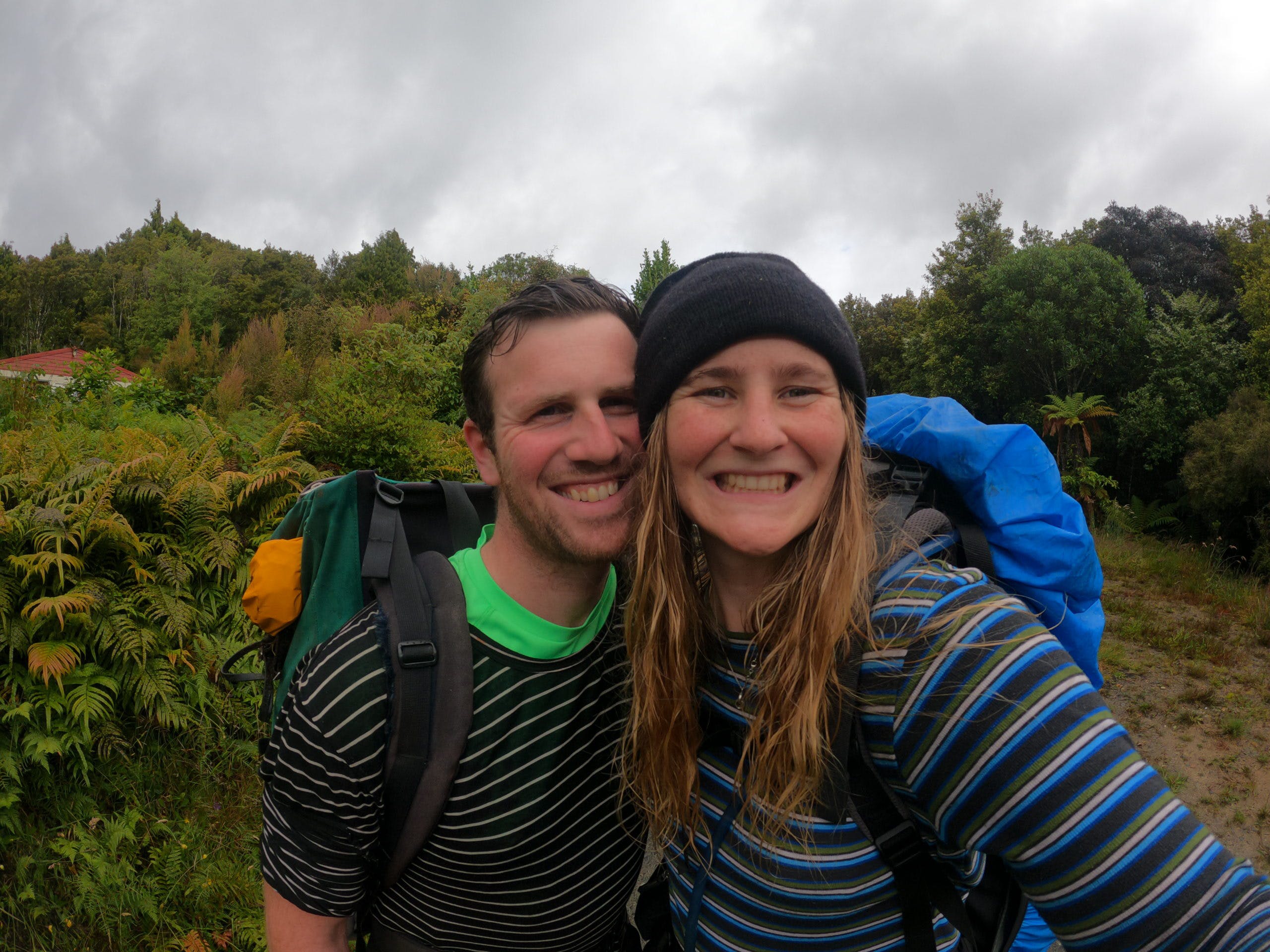 Still smiling and thinking ahead to the next long hike – Will and Marayke at the end of their Rakiura holiday. Photo: Marayke Bouma

We opted to wait it out rather than take on the high tide route through the sand dunes and cliffs. We pitched the fly amongst some bushes and snuggled into sleeping bags. Late afternoon naps aren’t common on tramps, but I’d recommend it. A pot of ramen with miso soup and six long hours later we were ready to make our way past the headland. Mason Bay hut was a very welcome sight.

A light drizzle turned to heavy rain overnight and with two days to go, we were turned back by a flooded river. Friends we’d met at other huts were getting a jet boat from Freshwater Hut the next morning, so we were secretly looking forward to nabbing a ride home with them.

But then, I had that feeling many trampers know well. The final test: perseverance. I must have had a mischievous twinkle in my eye. We couldn’t skive off now, only five-sixths finished. The river would be passable by the morning. Some old lad in the hut book had left a note as if specifically for me: ‘Don’t be tempted by the jet boat – you can make it! It’s not that hard!’

After some wrangling, Will begrudgingly agreed. With a 6am start and a pining look at the jetty, we set off to smash the last two days. It took us eight hours, fueled by the prospect of a cold Guinness at the pub and a hot shower at the backpackers.

You’d think that after 126km we would take a bit of a break, plan a relaxing holiday for once. Friends said to us, puzzled: “You know you don’t have to do things like this, right?” But the North-West Circuit felt like a taster of something that will become a lifelong habit. Long endurance trips are pretty special. Hello, is that Te Araroa calling me? I might be needing a slightly bigger whisky flask.