Access
From Te Kuiti, head southeast on SH30 for 55 km. Turn right into Maereroa Road, then left onto Barryville Road. The Pureora Field Centre is 2.5 km along this road. Piropiro Campsite is at the end of Koromiko Road, off the Waimiha-Ongarue Road. At Ongarue, turn right twice to Mangakahu Road. Shuttle transport is available.

Originally well over three-quarters of New Zealand was covered in forest. Today it is less than one quarter. Seldom do the decades of destruction give rise to any present benefit, so the recent opening of the Timber Trail along the western edge of the Hauhungaroa Range is indeed gratifying. It represents a serious attempt to bring good out of bad by providing an exciting recreational option alongside economic benefits, and all of it sustainable. 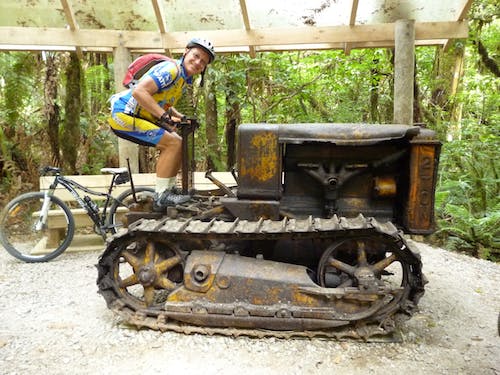 Pureora Village in the north to Ongarue in the south. Utilising historic bush tramways, old bulldozer and haul roads, and newly constructed track, it passes through impressive podocarp forests of rimu, totara, miro, matai and kahikatea, as well as some exotic forestry and more open vegetation, offering extensive views of the surrounding landscape.

As a mountain-biking venture, it’s part of Nga Haerenga, the New Zealand Cycle Trail.  With reasonable fitness, you can comfortably ride it in two days. For tramping, double that at least. My preference would be to bike the northern half (40km), and walk the southern half (45km) over 3-4 days, with one important proviso: starting at the northernmost end of either half will save a lot of arduous climbing.

The first section of our trip was tailor-made for those wanting a short out-and-back ride or a day-walk. It began in the picturesque Pikiariki Ecological Area, about 200m east of the Pureora Visitor Centre. A boardwalk is crossed before the track winds through tall podocarp up to 800 years old. Listen out for birds here, especially kaka.

After 3km, a sidetrack leads to an historic Caterpillar crawler tractor used to recover fencing material from totara logs during the 30s and 40s.

The track crosses two roads before winding through toitoi, cabbage tree, five finger and kamahi regenerating after milling. It crosses Tui Rd and, after a gentle climb, reaches ‘red shed’ shelter, where there are expansive views to the west. We carried on up the steeper flanks of Mt Pureora to the track’s highest point. The cloud forest and two epic bridges, over Bog Inn Creek and Orauhora Creek, are stunning.

It is 40km to the spacious Piropiro Flats camping area. Apart from the water supply flowing out of a rather hard-to-find concrete pipe, this is an attractive place to spend the night.

Beyond Piropiro, the first highlight comes relatively quickly – the magnificent Maramataha suspension bridge, one of the longest (141m) and highest (45m) single-spans in the country. Over the bridge, the steepest climb on the trail leads to what was the northern end of the Ellis and Burnand tramline.  From this point on, the past becomes the basis of a fascinating journey into history and heritage.

Timber was a significant pioneering industry and the Ellis and Burnand sawmill at Ongarue (1910-70) was a major Central North Island operation in both scale and longevity. It was one of the largest native timber companies in New Zealand, and almost certainly the leading producer of rimu.

Until the late 1940s bush tramways were the principal method of transporting felled trees. Around 1000 bush tramways once operated throughout the country. Most have been destroyed, but the Ongarue tram system survives unmodified, making it nationally significant. Along its length, a 16-wheel-drive bush locomotive delivered massive trunks to the mill.

The old tram route winds through picturesque natural bush, with numerous cuttings, embankments, stream crossings, cliff ledges, old huts and frequent interpretative panels. And happily, it’s mostly downhill all the way. The Ongarue spiral is one of the most spectacular sections, a marvel of engineering comprising a lower-level bridge, a very deep cutting, a curved tunnel and an over-bridge. The final few kilometres to the car park seemed bland by comparison.

Journeying along this trail fosters the impression that you are in the middle of nowhere, and that is part of its charm.  ‘Pureora’ refers to a sacred rite designed to bring about healing. There is certainly a sense of the numinous on the Timber Trail, and its beauty and solitude will prove to be therapeutic for many.