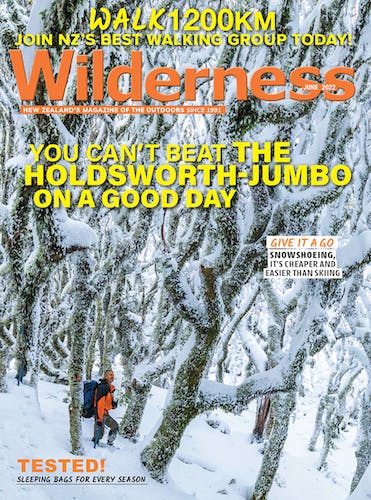 Choose between the track or a river bash and pack float on a trip to Mangahao Flats Hut, a lesser-frequented hut in the northern Tararuas.

Mangahao Flats Hut is one of the less frequented huts in Tararua Forest Park, and the time taken to get there can be anything from four to eight hours, depending on experience, fitness and group size and ability.

Reaching the track requires driving past the Mangahao Hydro Electric Power Station which was completed in 1924. From the road end there’s a well-formed track on the dam’s western side, or, if the water levels allow, it is quicker to simply walk up the side of the dam.

Roaring Creek is soon crossed on the true left of the Mangahao River and from here the expansive river valley with its flat terraces allows trampers to ditch the track and walk straight up the watercourse.

A bridge over the Mangahao River is reached about halfway between Roaring Creek and Harris Creek. From here, it’s best to take the track to avoid a gorge. The track sidles this gorge, and although it looks flat on the map, it is ‘Tararua flat’ – constant up and down without breaking a contour line.

Dick Creek, on the true right, can be difficult to cross in heavy rain, but Harris Creek has a bridge. It’s two to three hours to reach Harris Creek from the car park. An hour further is Barra Stream, also bridged, and also potentially problematic in heavy rain. From Barra Stream, the track avoids a short gorge, with deep emerald green swimming holes, and gives views to the Mangahao River below.

After the gorge section, the track is much easier – and properly flat on grassy terraces. Two small slips are crossed, and it’s easier  going in or by the river than on the track. Whio may be seen around this section and beyond the hut.

From Barra Stream it’s 1-2hr to Mangahao Flats Hut, which the Manawatu Tramping and Skiing Club maintain. In March 2021, the club repainted the outside and inside so it is in tidy shape. The hut is in sheltered bush on a terrace above the river. It’s large and has a woodburner in good working order.

In summer, it’s possible – and pleasant – to return by pack floating down the river in several of the gorge sections, where deeper pools and longer swims can be encountered. Alternatively, it’s possible to tackle a mixture of track and river by opting for the river sections without gorge, ducking back to the track before the first gorge between Barra Stream and Harris Creek and after the main bridge across the Mangahao River.

Camping spots abound amongst the lush greenery and ferny undergrowth. Watch out for picturesque miniature waterfalls spilling into the main river.