I gripped the metal chain anchored to the rock, and my fingers soon turned white. I was hot, but couldn’t let go to wipe the sweat from my brow. Finding my next foothold, I pulled myself onto a narrow shelf inside the chimney. Glancing down, I could see George looking a bit nervous.

“You can do it,” I encouraged him.

We were climbing to the summit of Monument, a distinctive feature on Lake Manapouri in Fiordland. Although only 290m high, it was a short but challenging climb, with steep sections through beech forest followed by a few minutes’ walk along the ridge before the real fun begins near the top.

We climbed through the vertical rock chimney, but couldn’t relax just yet. There was still some steep, crumbly rock to climb and a narrow ledge to negotiate above a precipitous drop on one side.

Finally, at the summit, we were rewarded with breathtaking views of Lake Manapouri, its many islands and the surrounding mountains. It had to be the best reward-to-effort climbs in Fiordland.

The Maori name for the lake is   Moturau, meaning a hundred isles. It was due to a surveyor’s mistake that the name Manapouri – initially the name for North Mavora Lake – landed on the map, and stayed there.

For us, the hike was a diversion on a kayaking trip to Hope Arm. It was my fifth visit, and on this trip I wanted to investigate the two portages that promised to cut quite a lot of paddling time from the journey.

On the way into Hope Arm, we took the short portage and as we paddled out of Circle Cove the nose of my kayak pointed between two conspicuous and familiar landmarks. On the left was Monument with its characteristic bluffs near the top, and on the right, much further away, was Mt Titiroa.

We pulled our kayaks onto the white sand beach at the base of Monument and found a shady spot for lunch. Even though it was sunny and calm, there were hardly any sandflies.

We then headed for the clearly-marked track through the bush and made our way to the summit, from where we could see the beach below with our boats looking like toothpicks. To the north were Cathedral Peaks, an outlier range leading to the Kepler Mountains. We could see many of the islands that dot the lake, with the two largest – Pomona and Rona – easily identifiable.

It took us an hour to walk back to our boats, nearly as long as the climb up. By the time we got back on the water, the wind had picked up and we battled strong gusts for the 40 minutes it took to paddle to the head of Hope Arm.

We pulled our boats ashore and claimed our bunks in Hope Arm Hut. George tried his hand at fishing in the lagoon at the eastern end of the beach. After about four casts, he pulled a beautiful rainbow trout out of the water. It proved to be delicious.

The following day, I followed George into Hope Arm and on to George Bay, where we tried the longer portage. It was easy enough, through the bush and on a marked track, and I’m glad for the time it saved.

View more images from this trip 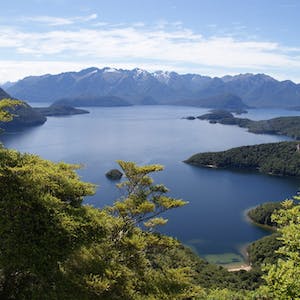 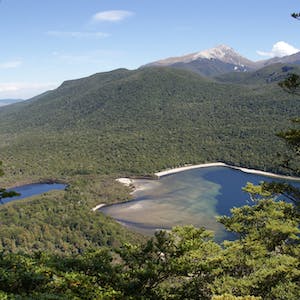 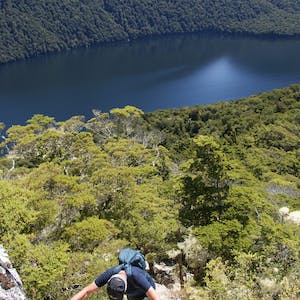 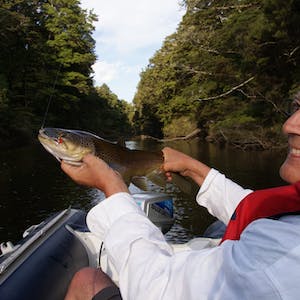 Access
From Frasers Beach, Manapouri. The track to Monument is reached only 2km north of Hope Arm Hut by boat, kayak or water taxi