A software engineer has pinpointed the point farthest from civilisation in the country, but the question on every trampers’ mind is, ‘how do you get there?’

Auckland software engineer Hamish Campbell used a range of data tools to locate the point farthest from any man-made structure in the country and found it lies on the coast of Fiordland, just north of Resolution Island, near the head of Coal River (coordinates -45.499,166.696).

There are no tracks in the vicinity and the terrain is a labyrinth of mountains and fiords, making access a conundrum.

Editor of Moir’s Guide South: The Great Southern Lakes and Fiords, Robin McNeill said it would be an achievable tramp for those with off-track experience in Fiordland.

The trip would be a spectacular route through the heart of Fiordland, including an alpine pass and visiting lakes which few have ever seen.

“I wouldn’t mind doing it,” McNeill said. “Sometimes you need a reason to go into these places and the story is half the adventure.

“But it depends on how much of a purist you want to be.” 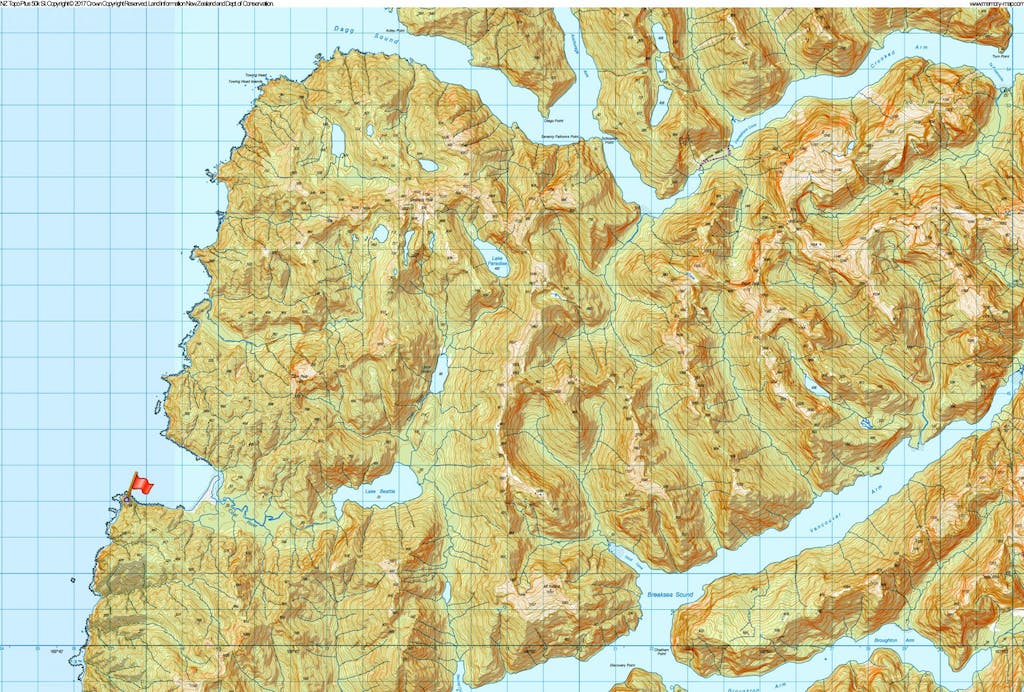 Accessing the point requires traversing from Narrow Neck on Dagg Sound, through to Lake Beattie and Coal River

McNeill said he would first commission a fishing boat to take him from Deep Cove in Doubtful Sound to Narrow Neck, at the head of the Crooked Arm inlet.

From there, it requires crossing Narrow Neck, and following the coastline of Dagg Sound to the unnamed valley branching south of the sound. Then it’s a matter of finding a ridgeline to the tops to traverse the unnamed range over to Lake Swan.

“It depends on how much you like bush bashing and whether you’ve got a good head for heights. You could force a route up the north-west arm to the pass at Pt919, or follow the ridge from the valley floor to Pt1040.

McNeill suggests then following the valley to Lake Beattie and onto the Coal River, where a coastal scramble would lead to the hallowed point of isolation.

But he said it wouldn’t be a trip for those new to Fiordland.

“I’d hone your skills in other places in Fiordland before trying this.”

McNeill said typically you can travel about 8km a day when tramping off-track in Fiordland – an average of about a kilometre an hour.

While this location has been derived from a desktop exercise, are there other locations which offer even more remote tramping terrain?

McNeill’s top picks are the Cameron Mountains and the Dark Cloud Range, in the southernmost part of Fiordland.

“For sheer difficulty to get to they rate as some of the most isolated spots. A place like Lake Monk in the Cameron Mountains would be a fantastic place to get away to. You’re miles from the nearest hut.”