Nothing is more striking at this time of year than an autumn sky reflected in the mirror still surface of a lake. Here are three very different, but equally alluring lake walks. By Derek Morrison

The spiritual home of the Tuhoe people, Lake Waikaremoana is one of the most accessible gems in Te Urewera National Park.

The 46km Great Walk that meanders around the south and western shore of the lake will take you about three to four days to tramp with five DOC huts providing comfort from the sometimes changeable weather. If you’re lucky enough to encounter light rain you’ll discover why the park’s original inhabitants were known as ‘Children of the Mist’.

You’ll traverse beech forested valleys and descend into thick rainforest where podocarps reign and provide habitat for the abundant birdlife that includes kiwi and kaka.

The track can be walked in either direction, but if you want to get the most strenuous bit out of the way first then start from Onepoto. After almost 9km (mostly uphill) you’ll find the 36-bunk Panekiri Hut, which is cited next to Puketapu Trig at 1180m.

From here it’s a 7.6km descent to the Waiopaoa inlet where you’ll discover the 30-bunk Waiopaoa Hut. Some 12km further along is Marauiti Hut. It is reached via two beautiful campsites – the first, Korokoro, has a waterfall that is reached via a side-track (30min). The Maraunui campsite is also a little slice of heaven.

Another short walk along the shoreline leads to Waiharuru Hut and from there it’s a 5.3km trek to Whanganui Hut. From Whanganui hut it’s a 45-minute walk to the water taxi pick-up and drop-off point or a two-hour walk to the trailhead at the Hopuruahine Suspension Bridge and the finish of this spectacular walk.

Access Via Waiora (60km) or Gisborne (80km), or Murupara (90km) along unsealed roads.
Time 3-4 days and exit via a water taxi back to your vehicle or use one of the private shuttle services available.
Map BG40, BG39 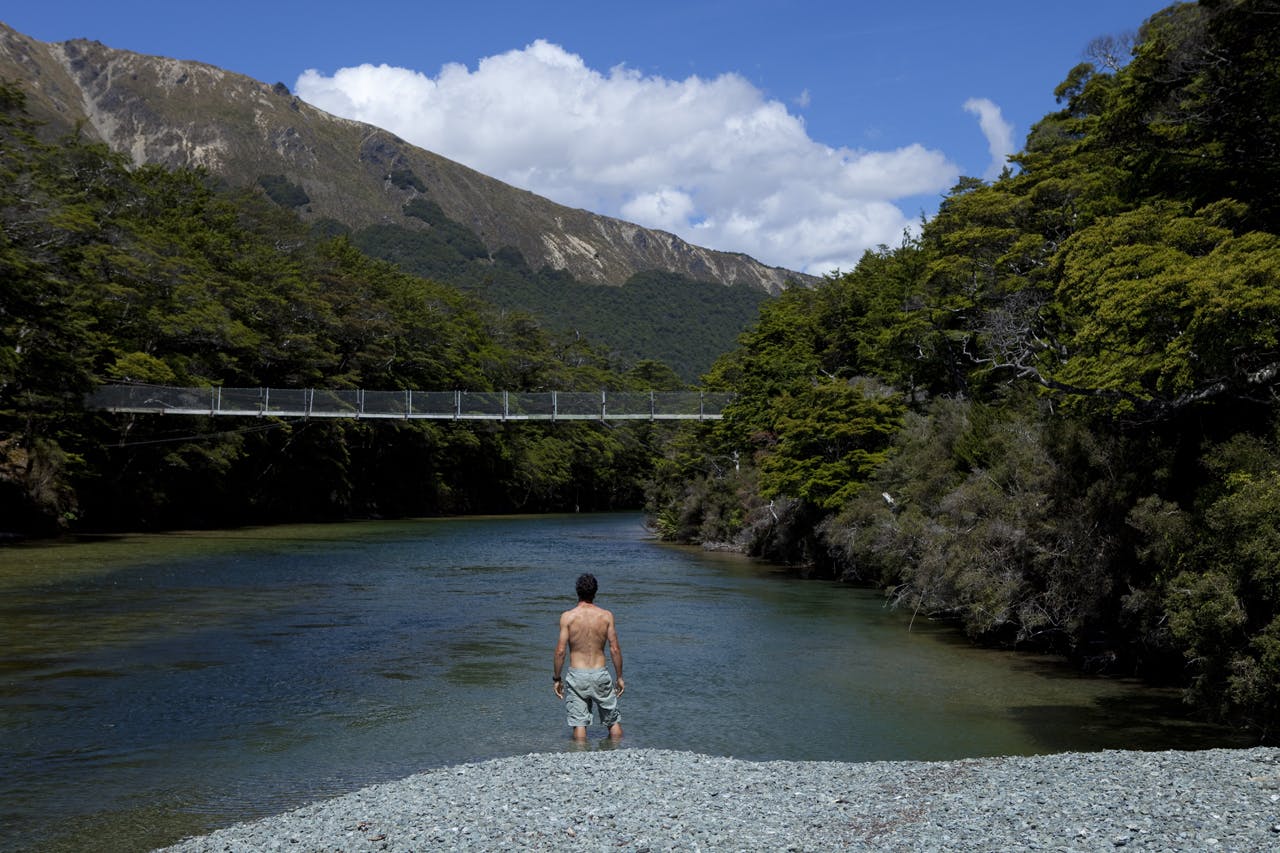 Dallas Hewett takes a dip at the outlet of the North Mavora Lake. Photo: Derek Morrison

Step into the movie set from Lord of the Rings with this short, but spellbinding trail that weaves through beech canopy along South Mavora Lake’s western shore.

The Mavora Lakes are separated by a short section of the crystal clear Mararoa River and it is at the outlet of the north lake that you will find one of DOC’s finest campsites. It’s a beech tree-shaded labyrinth of secluded camping on the lake and river edge towered over by the Livingstone and Thomson mountains.

Camp the night here and you will also have the chance to hear one of the most amazing dawn choruses in the country.

From the campground, cross the swingbridge to the western side of the lake. There is a small trout fishers’ trail that heads north for about an hour and is worth the out and back,before heading south on the South Mavora Lake Walking Track.

The trail winds through stunning beech forest with bright green mossy pillows and blankets strewn across the earth. The trickle of the river tumbling over rocks and the occasional slap from an elusive trout are the only competition for the birdsong. After three hours you’ll pop out at the lake’s outlet and cross another swingbridge to return via the opposite shoreline.

Sandflies rule here so bring some heavy duty repellent. Mavora is a great area to explore with other walks such as the 4hr Mavora to Kiwi Burn Hut and the four day Mavora-Greenstone Walkway nearby.

Access Take SH94 between Mossburn and Te Anau looking for the signposts to the lakes at Centre Hill or Burwood Station. Follow the unsealed road for 39km to the turn-off to the Mavora Lakes
Time 3hr each way
Map CC09 North Mavora Lake, CD09 South Mavora Lake 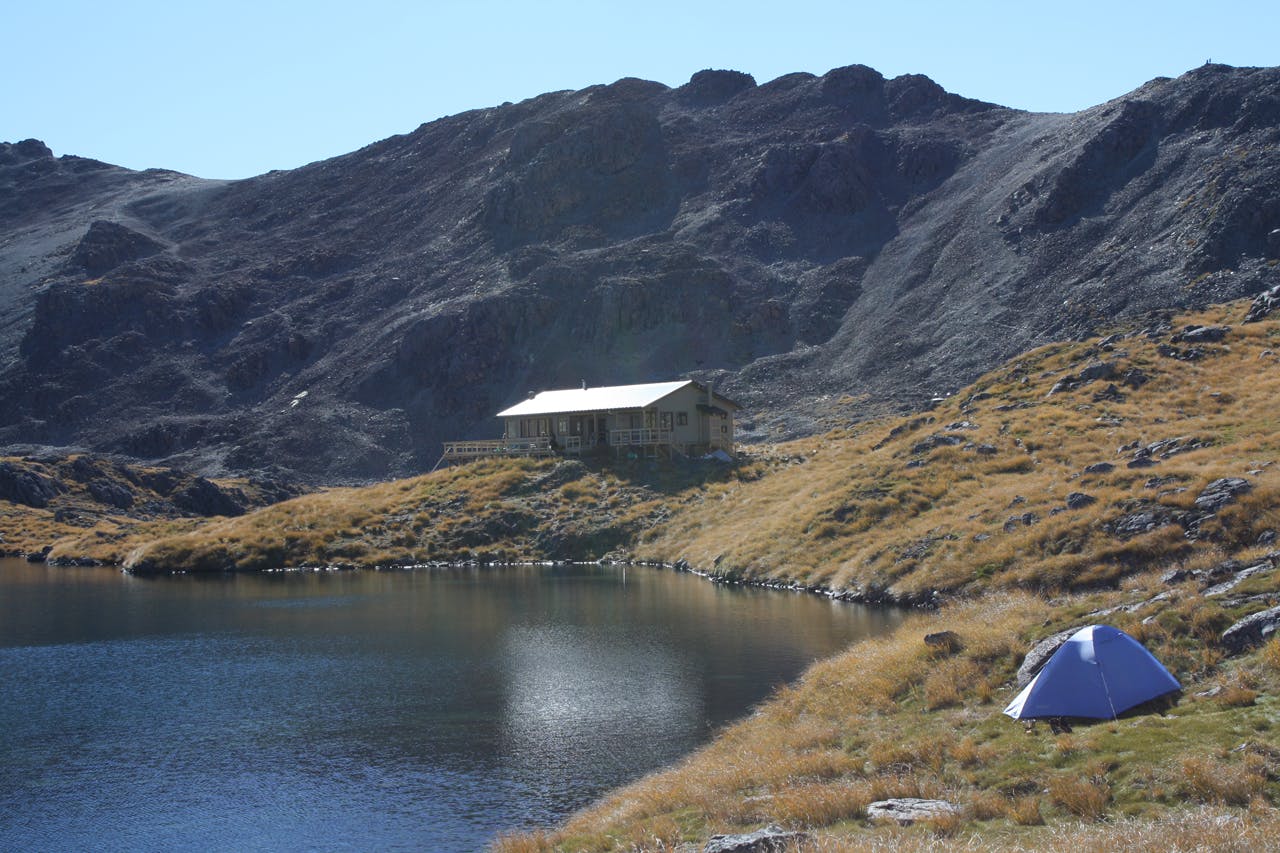 Once named Rangimarie, this alpine lake sits high in the ranges between Lake Rotoiti and Lake Rotoroa in the Nelson Lakes National Park, and, as its Maori name suggests, it is indeed a peaceful place to visit.

There are four track and route options to get to Lake Angelus (1650m) and each of them will take about six hours. The lake is more of an alpine tarn and is picturesque in all seasons, although access in winter can require some additional snow and ice skills – you may even find you need to dig your way into Angelus Hut.

The 28-bunk serviced hut overlooks the lake, which is frozen throughout winter. There is also a beautiful campsite right on the land bridge that juts out into the lake.

Three tracks begin from the Mt Robert car park. The Pinchgut Track-Robert Ridge Route can be dangerous in winter snow and ice, or in high winds. The Speargrass Track is best in adverse weather conditions and the Travers Cascade Track is a great option if you want to spend some time on Lake Rotoiti.

The fourth option begins behind Sabine Hut (480m) on the Travers-Sabine Circuit (80km, four to seven days) and climbs a steep route to Angelus Basin.

While winter is a tough time to travel in these areas, those with the appropriate skill will enjoy ski touring along Robert Ridge. In summer it’s an easy climb to the top of Mt Angelus (2075m).

Access Mt Robert car park south-west of St Arnaud.
Time Allow up to 6hr to reach Lake Angelus and be prepared for snow and ice in winter
Map BR24, BS24