My tent, my castle … or so the saying goes, but it never rings more true than when you’re backcountry in a remote camping spot with your family and surrounded by adventure in every direction. That’s what makes these camping spots worthy of your family’s wish list. By Derek Morrison

Just two hours’ drive south-west of Dunedin is the Catlins coastline and the stunning Purakaunui Bay. The sign on the gravel road turn-off not far from Owaka is so small that most miss it and in doing so miss one of DOC’s best conservation campsites. Nestled in Purakaunui Bay Scenic Reserve, the 40-site camp ground overlooks a beautiful white-sand beach and across to striking 200m-high cliffs. At their base, yellow-eyed penguins breed and in the dunes behind the beach male sea lions entertain their harems.

The campground fills to the brim over Christmas and New Year. The shoulder season offers a more peaceful experience with better wildlife activity and wide open spaces. An easy walk up a zigzag farm track will take you to the top of the clifftops in about an hour. It’s a favourite launching platform for paraponters and makes a stunning half-day excursion.

Getting there From Balclutha on SH1 head south to Owaka. Carry on through to the Ratanui turnoff. From here follow Purakaunui Falls Rd to Long Point Rd and then branch off on the gravelled Purakaunui Bay Rd.
Cost Adults $6, children $3 per night via an honesty box. Long drop toilets, some washing water and rubbish bins provided. 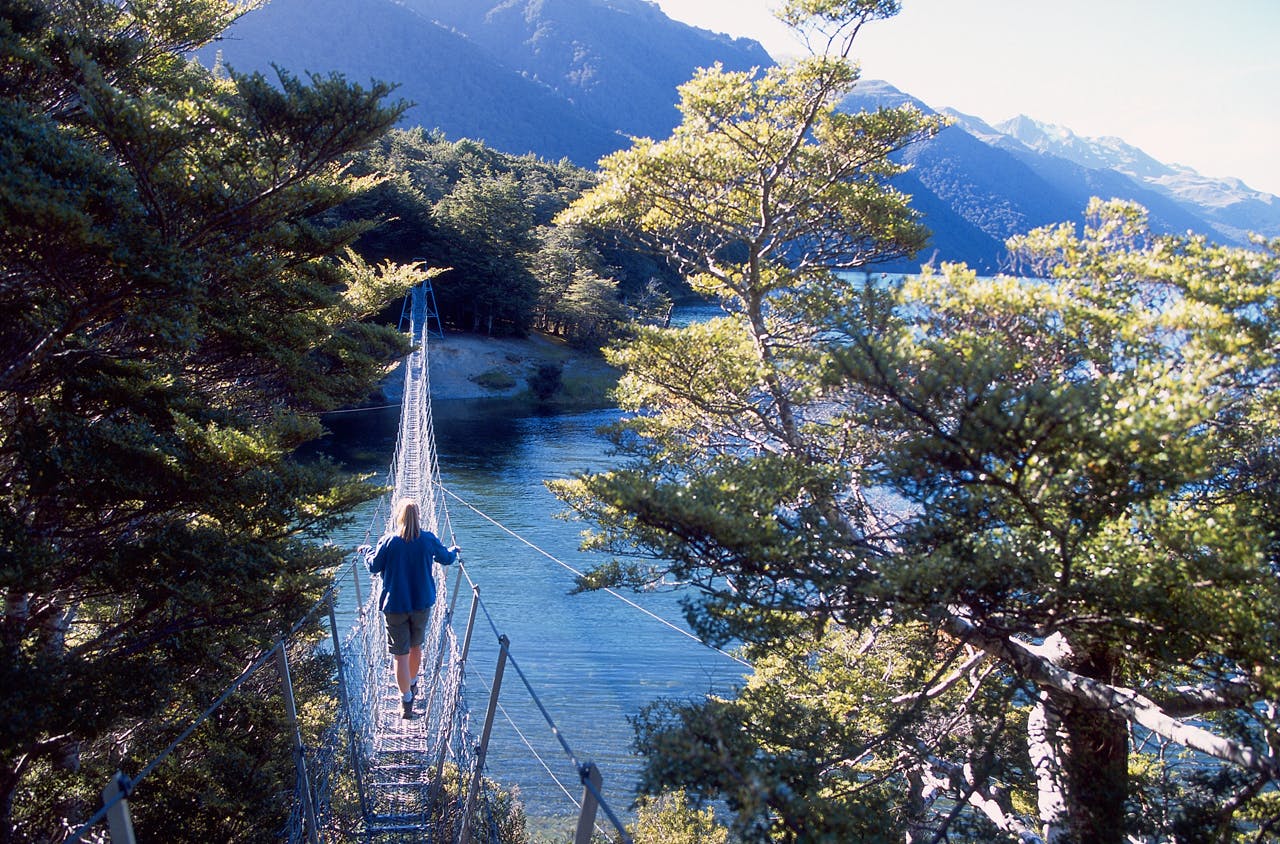 The Mavora Lakes camping area is perched between and around the North and South Mavora Lakes in erratic stands of native mountain beech. Connected by the Mararoa River there is a swingbridge at the south end of both lakes and at the exit of North Mavora Lake is one of the most popular spots.

The 60-site camp is surrounded by beech forest trails and areas that featured in The Lord of the Rings trilogy. A great day walk is the trail that links the two swingbridges via the western shore of the South Lake.

The Mararoa River is cold but swimmable and brimming with trout – you can literally see trout lazing around on the lake and river bed. A 4WD trail up the eastern edge of the North Lake leads to Carey’s Hut (9km), rustic Forks Hut (9km) and Boundary Hut (6km) – all worthwhile excursions with grand views of the Livingstone and Thomson mountains.

The dawn chorus here is worth the trip alone.

Getting there Head toward Lake Te Anau on SH94. Just beyond Mossburn, turn right onto the gravel Centre Hill Road or Mavora Lakes Road.
Cost Adults $6, children $3 per night. Potable water on tap and vault toilets. You will need insect repellent, and lots of it, for the sandflies. 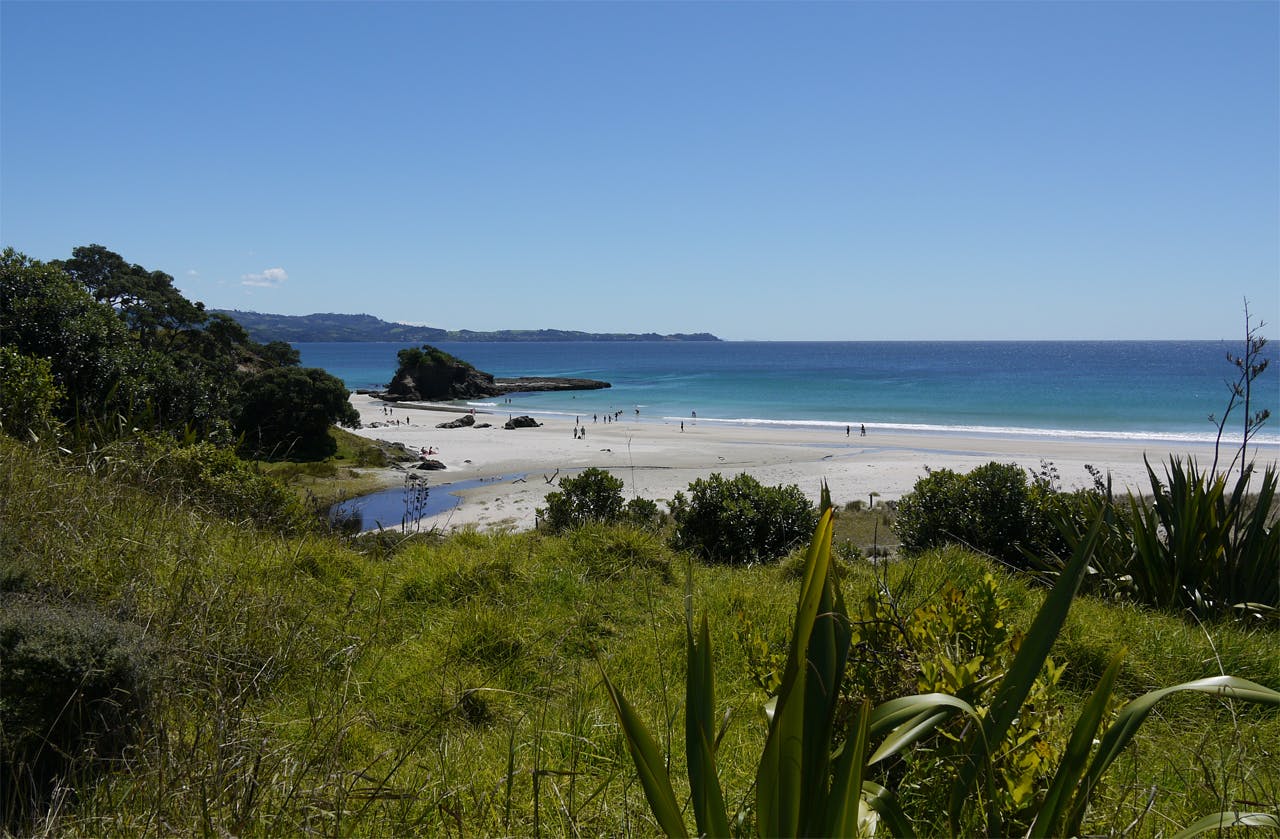 Just 90km from Auckland’s CBD you will find this secluded campground on an intriguing peninsula that is New Zealand’s first integrated open sanctuary.

The sanctuary is essentially a mainland island where farming, public recreation and conservation go hand-in-hand. Enclosed by a predator-proof fence the Tawharanui Regional Park is 588ha arcing around Omaha Bay with myriad other white sandy beaches and shingle bays adding to its appeal.

Fringed by native coastal forest, the peninsula has a network of walking and mountain biking trails that venture out to Tokato Point, Elephant Point, Bluebell Point and Scow Point. There are lots of trails for the adventurous family to explore including the 4km Maori Bay Coast Track, the North and South Coast Tracks (8km), the Fisherman’s Track (2km) and the Ecology Trail (3km). Think a week’s long enough? Think again.

Getting there Head north on SH1 to Warkworth and then towards Matakana. Signs indicate the way once you’re off SH1. The final 6km stretch is gravel road.
Cost Adults $12, children $6 per night – maximum of seven nights. Vault toilets and potable water taps in each bay. Maximum of 260 people in campground, bookings permitted.