The magnificent scenery is a given, but did you also know the history of many Great Walks is equally impressive?

‘Great Walks’ may well be a modern moniker and concept, but many of our greatest tracks also have a long history, sometimes stretching back centuries. Maori lived in the Abel Tasman and Rakiura areas and used trails across the mountains which are now part of the Tongariro, Milford and Lake Waikaremoana tracks. During the mid-nineteenth century, European explorers established bridle tracks over the Routeburn and Heaphy, and the Milford Track was a tourism venture. Part of the new Paparoa Great Walk is a historic gold mining route known as the Croesus.

These five sites all feature something of historical interest, adding to the splendid scenery the Great Walks are famous for. 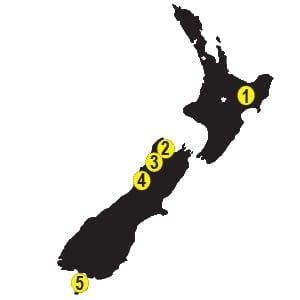 Historic photos show several buildings, cleared forest, stone walls and palisades at Onepoto, on the edge of Lake Waikaremoana. Here, members of the armed constabulary built their redoubt during the late 1860s in what became the last major offensive of the New Zealand Land Wars. Colonel J Herrick and his 500 soldiers based at Onepoto planned to capture Maori prophet Te Kooti Arikirangi. Government forces pursued Te Kooti and his supporters across the expansive forests of Te Urewera, but despite several skirmishes, failed to arrest him.

These days, little remains to tell this history with only a shelter at the start of the Great Walk.

2. Whariwharangi Hut, Abel Tasman Coast Track
Whariwharangi Hut is the northernmost and least used of all the huts on the track, but it’s also the oldest and most charming.

Maori occupied the sunny, sandy expanse of Whariwharangi long before Europeans arrived, usually in seasonal camps. Then, pioneering farmers John and Edith Handcock leased the land from local Maori and built the homestead in 1898 by shipping in materials through the surf. The area was grazed, off and on, until the 1970s. Only after the area was retired was it added to the national park, and the Department of Lands and Survey converted the homestead into the hut still used today.

Gouland Downs was recognised as an important area for native wildlife early in the 20th century, and the first hut in the area was built in 1915. It burned down 17 years later, with a replacement erected in 1936. Although highly modified, this is the hut used by trampers and mountain bikers today.

4. Croesus Top Hut, Paparoa Track
Since the mid-1980s, when nearby Ces Clark Hut was constructed, Top Hut has rarely served as a shelter. But it remains as a monument to decades of mining effort on the Croesus Track. All of the many huts that used to exist in the area are long gone, except this one and another down in Garden Gully. Both date from the 1930s, when government subsidies encouraged unemployed men to try their luck at mining old goldfields like the Croesus.

5. Maori Beach mill site, Rakiura Track
Like many coastal parts of Stewart Island, Maori Beach has long been a site of human activity, with Maori occupying the area for centuries before European settlement in the 19th century.

In 1913, a timber-mill was opened and soon a settlement large enough for a small school sprouted up. Workers used steam-powered winches to haul logs, mainly rimu, out of the bush, where they were transported to the mill site by tramway. Timber extraction ceased in 1931.

Trampers enjoying the Rakiura Track can visit the historic boiler and engine, which is reached after 2.5-3hr from the road end at Lee Bay.