More often than not, it’s explorers or politicians that get features named after them, while the achievements of most scientists rarely make the limelight.

But New Zealand is an anomaly – it has more natural features named after scientists than any other comparable area on Earth.

Some of the earliest features named after scientists are Banks Peninsula (named after Captain James Cook’s naturalist, Joseph Banks) and Solander Island, named after Daniel Solander – who was also a naturalist on the Endeavour’s seminal 1769 visit to Aotearoa.

Such a dazzling array of scientific luminaries is all very well, but apart from Rutherford, none of them are New Zealanders. My interest piqued, I looked for other places where New Zealand scientists feature. 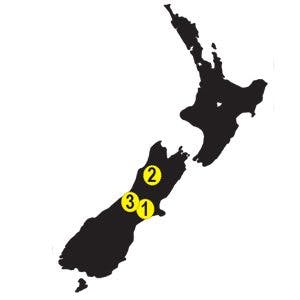 Scottish-born scientist James Hector was a giant of 19th century New Zealand science. As well as making significant contributions to botany, geology and exploration, Hector played a critical role establishing the New Zealand Geological Survey, the Colonial Museum and the Meteorology Department. As a landmark clearly visible from the site where Hector worked, it’s a reasonable assumption that Mt Hector (1529m) is named after him. However, according to Tararua expert John Rhodes, there is no proof of that. Another Mt Hector, in the Canadian Rockies, is named after him. New Zealand also has Hector Col in Mt Aspiring National Park, and the ground-hugging alpine plant Hectorella.

German-born geologist and explorer Julius von Haast was a colossus in New Zealand’s 19th century scientific scene, and three features of Aoraki/Mt Cook National Park bear his name. Haast Ridge rises from the Tasman Glacier towards the Grand Plateau and provided the main route before the advent of aircraft access. Glacier recession and rock-fall danger have meant the Haast Ridge route and its namesake hut are rarely used these days. Mt Haast (3114m) is one of several peaks prominent from the Grand Plateau. Although somewhat dwarfed by nearby Mt Tasman, it’s significant for being one of our 30 peaks over 3000m.

Perhaps we’re finally getting with the times, naming some peaks after scientists who lived into the 21st century and one after a New Zealand woman scientist.