Congratulations to guiding company Adventure Consultants for successfully grabbing a photo of New Zealand’s backcountry flag from the top of Aoraki/Mt Cook.

The shot, of client Damian Ross-Murphy, was taken from just below the mountain’s summit on November 18 by guide Andy Cole.

The design was voted New Zealand’s flag of the backcountry by Wilderness readers earlier this year. Almost 1000 people voted from a shortlist of the final six.

Thanks to Andy, Damian and the team at Adventure Consultants for getting the flag to the top.

Around 260 DOC rangers will be given extra powers to protect wildlife from illegal smuggling, poaching or hunting, if a new bill is passed.

The bill will give warranted DOC wildlife rangers new powers to prevent an offence as it happens, seize evidence and ID belonging to the suspect, and temporarily stop those they suspect are about to commit an offence.

It wouldn’t give them the power to arrest – only a handful of DOC staff have the power to do this – but conservation minister Maggie Barry believes it will help staff fight poaching and smuggling: “This reform means DOC takes ownership of dealing quickly and efficiently with wildlife crime,” she said.

Noel Bigwood frequently worked with rangers in his 40-plus years in the police force. He believes the power to demand identity details is a good idea. “This should include the power to demand verification or take photographs,” he said. “Many offenders will give false details if they think they can get away with it.”

But Bigwood believes rangers need the power to arrest suspects who refuse to give their details – a power very few rangers would have under the new bill.

A lot of people tried to fool me during my police career. Most quickly gave up when presented with the alternative of arrest where their fingerprints would soon reveal the truth. Being able to photograph those who could/would not produce a licence quickly sorted a lot of incidents, too.” 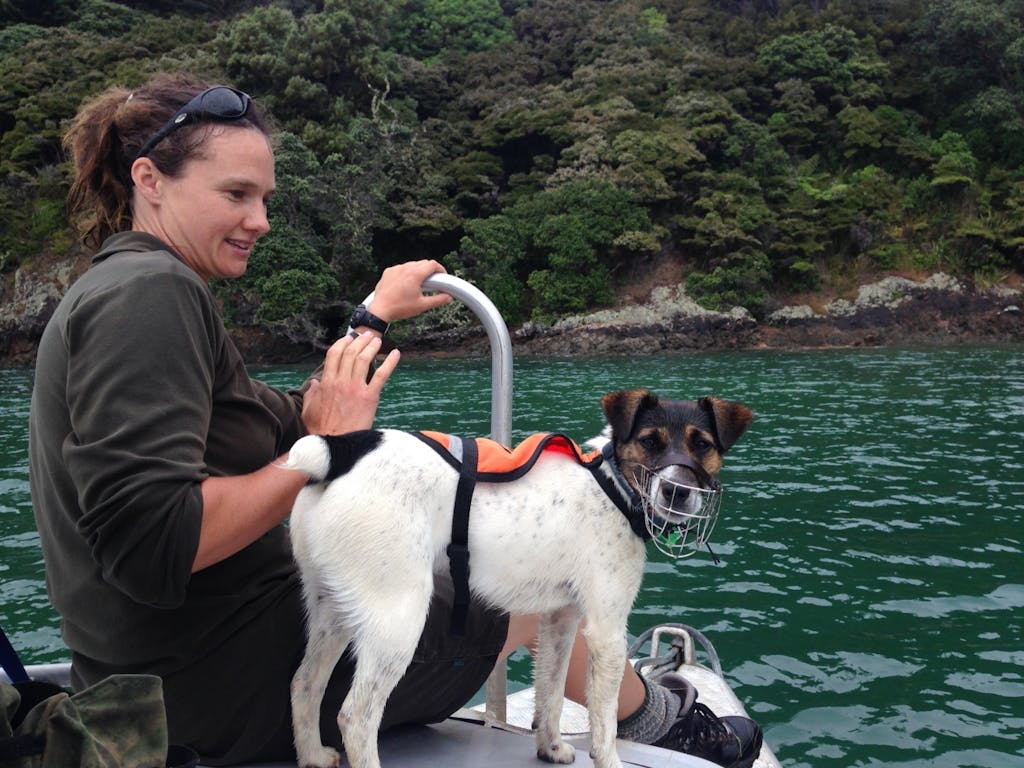 Angela and Macca on their way to another mustelid-detection job

Orokonui Ecosanctuary has finally captured and killed a family of havoc-wreaking stoats, thanks in no small part to Macca, a stoat detection dog from the Bay of Islands.

Macca, a 20-month old fox terrier who arrived at the Dunedin-based sanctuary with handler Angela Newport, indicated stoats were present at the base of a large totara tree in the very middle of the reserve.

Staff then saw a stoat leaving from one of the entrances before hearing the growling noises of kits (babies) from within the den.

Three of the five entrances were blocked, with traps set in the other two. A female and her baby were caught in one of the traps and, since then, there’s been no sign of life in the den.

“It is highly unlikely the kits would have survived alone for very long,” said Orokonui conservation manager Elton Smith. “It would seem no adult males are present inside our fence.”

But the sanctuary is taking no chances, with another stoat detection dog expected in the new year and the trap network remaining inside the fence.

A stoat was first discovered inside the sanctuary fence in June last year and the mustelid was responsible for killing every one of Orokonui’s 40 saddleback – the South Island’s only population of the species.

Macca is trained to detect mustelid scent and works with Newport mostly on protected islands in the north of the country. 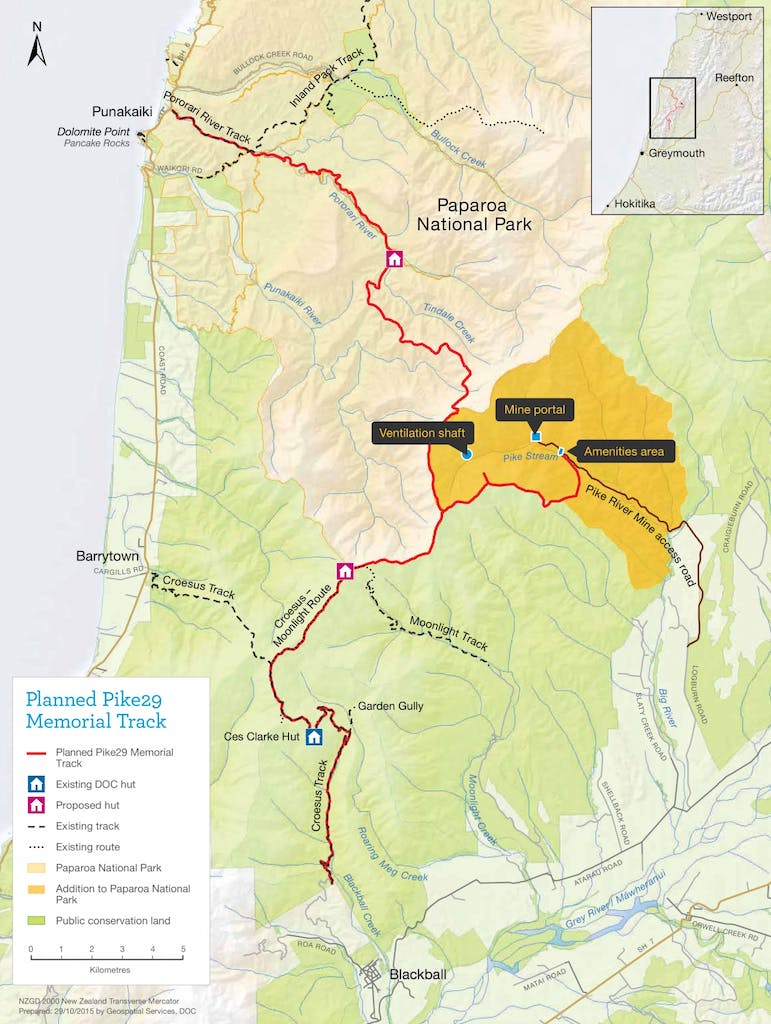 A 45km Great Walk will be built in an enlarged Paparoa National Park to remember the men who died in the Pike River mining disaster.

Confirmation of the $10 million Pike29 Memorial Track was announced by environment minister Nick Smith. The track, suitable for mountain bikers and trampers, will head from Blackball to Punakaiki, incorporating some of the Croesus Track and the Pororari River Track, and will include an 8km side track to the site of the Pike River Mine.

Two 20-bed huts will be built on the Moonlight Range and the Pororari Valley.

In addition to the trail, Paparoa National Park will extend by 3971ha to include the catchment of the Pike River Stream.

Smith said the plan is to open the track at the end of 2018, saying the park extension and track-build “will require a review of the Paparoa National Park Management Plan. This will begin shortly and is to be completed in 2016. The next step for the new track will be the detailed design and seeking private sector contractor partners for its construction.

“This new Pike29 Memorial Track will bring new investment and jobs to the West Coast through the construction phase and long term through tourism. These will be welcomed in a region that has had more than its fair share of knocks.”