Should a gondola be built beside Franz Josef Glacier? That’s the question DOC is asking the public, as consultation gets underway for a new management plan for Westland Tai Poutini National Park.

Skyline Enterprises, the company behind the Queenstown and Rotorua gondolas, has asked for an amenities area to be included in the new park plan, which would allow for a gondola to be built.

The proposed gondola would run from the near the glacier valley car park on the valley floor, rising to 1700m near Almer Hut, close to the head of the glacier.

In the draft park plan, DOC has proposed permitting the development zone. It said the ongoing impacts of climate change and the retreating glaciers make providing safe and reliable access to the glacier a significant challenge and a gondola could provide a quiet and safe alternative to aircraft landings. People have been unable to walk on to the glacier from the valley floor since 2012, due to its rapid retreat.

However, the department said there was ‘currently limited evidence as to what impact the structures may have on intrinsic values in the area’, but it would include aerial cableways, pylons and possibly three gondola stations. The development would not involve a restaurant or cafeteria.

Skyline chair Mark Quickfall said it is developing a submission on the plan, which would include more detail on the proposal.

“We will be expanding on it as much as we possibly can,” Quickfall said. “But until we get further down the track with which company we are going to run with to build the gondola, it will be some time before we have all the details.” 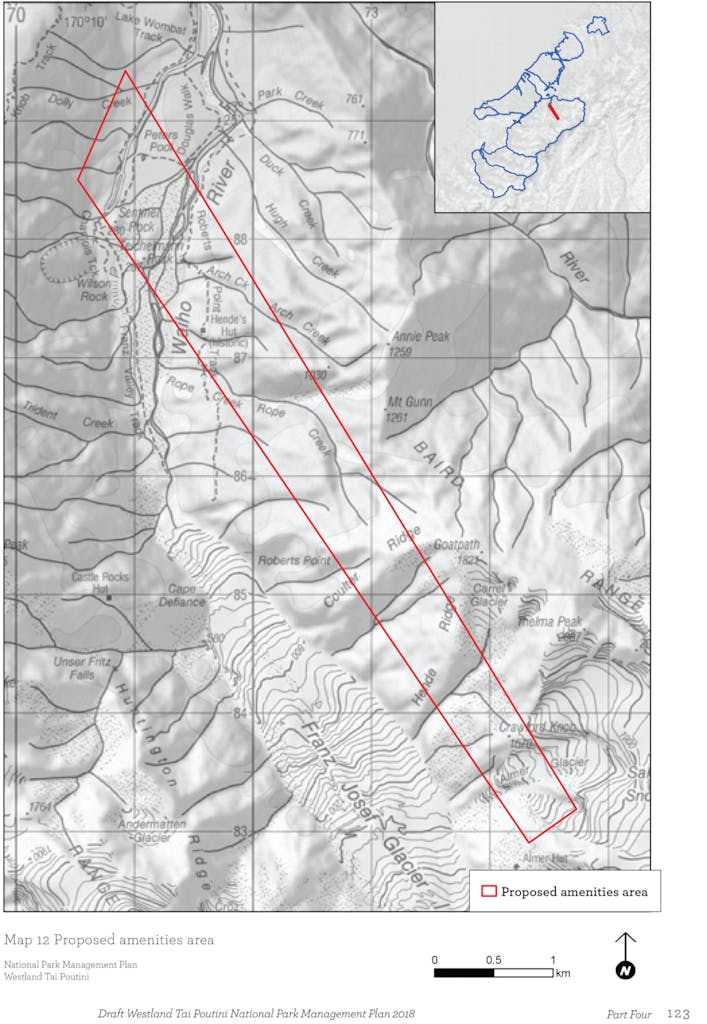 The proposed route of the gondola is shown in red

Quickfall said ideally the gondola would have a capacity of around 500 to 600 passengers an hour.

“We want to match capacity with the number of visitors already visiting the glacier and allow for growth,” he said.

Initially, Federated Mountain Clubs was cautiously supportive of the concept of a gondola if it would result in fewer aircraft landings.

However, DOC South Westland operations manager Wayne Costello said the department had no intention of reducing the number of aircraft landings if the gondola went ahead.

“Only a small proportion of visitors to the glacier do an aircraft landing,” Costello said. “The gondola would provide more opportunity for people to get up close and personal with the glacier at a different price. But there would not be fewer landings.”

FMC president Peter Wilson said it had polled its members and there was a lack of opposition to the idea. FMC would be submitting on the proposal and Wilson said he wanted further feedback from members to inform the club’s stance.

The park plan was the first opportunity for public input. Skyline would still need a concession and resource consent, which would also likely be publicly notified.

Quickfall said if the consents were approved, construction could begin in about five years’ time.

It is the first time DOC has considered a new amenities area in a national park and it said it would make a decision on the proposal after public consultation.