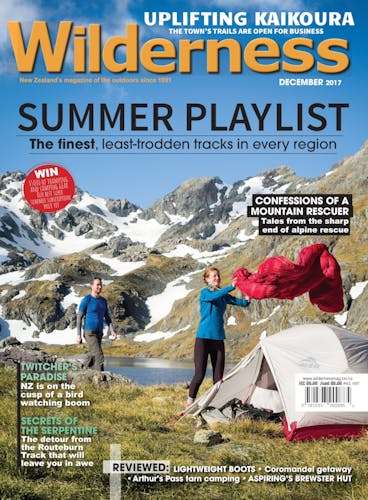 After becoming struck by the growing quiet of Fiordland’s forest, an Auckland tramper has launched a project to bring back the birdsong.

Michael Fisk, a regular to Fiordland, wants to create a trapping network in eight Fiordland valleys, but he needs help to bring it to fruition.

“The place gets quieter and quieter,” Fisk said. “Vast areas of Fiordland don’t get any conservation work at all, so we’ve got to take matters into our own hands.”

Working with DOC, Fisk has completed a six month trapping trial in the Cozette/Camelot Valley, west of Te Anau, which has 20 whio/blue ducks.

Fisk and a group of volunteers installed 250 self-resetting traps along 13km on the valley floor. The traps, which target rats and stoats, recorded 750 hits in six months. The Goodnature A24 traps only have to be checked every six months, and recently proved effective at eradicating almost all stoats from Great Island in Fiordland in a DOC-led trial.

Buoyed by this success, Fisk is looking for people to fund and manage pest control projects in eight neighbouring valleys. The valleys have been identified by DOC as priorities as they are adjacent to takahe and whio/blue duck conservation areas, complementing existing trapping.

Fisk estimates this would require about 59km of traps in total, with an A24 trap every 100m along the valley floor, costing about $227,000.

“The idea is for somebody to adopt a valley and take on the role of organising that area,” Fisk said. “I believe there are many New Zealanders who want to contribute time and money to conservation work, but perhaps don’t know where to start.

“DOC can’t do it all themselves. This is a chance to give real purpose to your time in the backcountry and we have a mechanism to offer tax deductions for donations.”

DOC hasn’t provided funding, but has given assistance in personnel and some hardware.

For a breakdown of costs and location of each valley, visit www.valleys.co.nz