Read more from the
December 2018 Issue

Read more from the
December 2018 Issue

In many parts of the world, mountains were once viewed as horrible wastelands, places of monstrous formations, cursed by God, of no use to anyone, or even feared as the home of dragons.

It wasn’t until the 17th and 18th century that more enlightened souls began to look at mountains in a different light – as places of marvel and beauty. Some even began to deliberately visit the mountains, for no other reason than to gaze at glaciers, to stand on the edge of precipices, and to encounter a moment of that strange mixture of awe, horror and beauty known as the ‘sublime’.

Europeans who came to New Zealand often brought these romantic notions of mountains with them, but the more practical-minded farmers probably preferred grasslands to precipices. And mountains did pose danger, as some hapless explorers discovered. No wonder some places got names like destruction, terrible, awful, dreadful and even death. Fiordland has Useless Bay and the

In contrast, Māori often viewed the summits of mountains as sacred, tapu, and many represent tupuna, or ancestors. So their cultural relationship with wild places is quite different, born from a long association. Much can be learned by understanding the Māori names of places, which are sometimes evocative but can also refer to dramatic or even brutal events of the past.

For the outdoor enthusiast, there’s something darkly appealing to visiting places where the name dares you to stay away. Here is a sample. 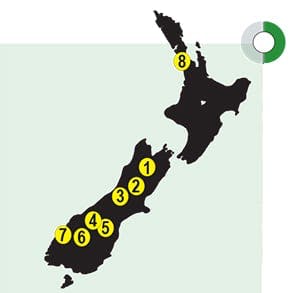 2 Terrible Knob, Lake Sumner Forest Park
At 1729m, Terrible Knob is one of the higher peaks of the Crawford Range, which divides the two major branches of Canterbury’s Hurunui River. It’s rarely visited, although approaches to it are not difficult up open beech spurs on its north-eastern flanks from Hurunui Hut.

3 Treachery Ridge, Mathias Valley
Treachery Ridge rises above Canyon Creek, a gulch in the headwaters of the Mathias River, a tributary of the Rakaia River. It was named by John Pascoe, whose party first climbed several of the area’s peaks during the summer of 1930-31.

4 Mt Awful,Mt Aspiring National Park
Mt Awful is a great anvil of a mountain, with a blunt face and square top, familiar to those tramping the Young-Wilkin circuit. Gillespie Pass, between the two valleys, offers a grand view of the peak, and the shrinking glaciers perched on its formidable flanks.

6 Death Valley, Humboldt Mountains
California’s Death Valley is famous, but who knew New Zealand has one too? It’s located near the head of Kay Creek, at a river forks beside Kay Creek Hut. A track to the hut leads from the main valley track in the popular Caples Valley. No doubt there is a story behind the name, but I haven’t been able to find it.

7 Terror Peak, Fiordland National Park
Trampers walking the Milford Track can glimpse the ridge leading to Terror Peak, which rises near the head of Poseidon Creek, a tributary of the Ada River.

8 Destruction Gully, Waitakere Ranges Regional Park
From the Whatipu Road, a steep trail leads down to Makaka Bay beside Destruction Gully, with views of waterfalls at one point. This track is currently closed to help prevent the spread of kauri dieback disease.