Two Wellington artists have brought the backcountry to the city, writes Shaun Barnett

Over the last year, Wellington hut-baggers have had a choice of an extra seven huts to visit, with not one of them more than a 20-minute stroll from the nearest road-end. These are not conventional huts, however, but instead the inspired work of two Wellington artists, Kemi Whitwell and Niko Leyden.

The project began after the couple applied for a grant from Wellington City Council to make art from salvaged materials. From there, it grew into a year-long project, Miniature hikes and huts, centred on the theme of huts and hiking.

Calling themselves Kemi Niko & Co (with the ‘Co’ standing for ‘Connective’), the couple are both full-time artists living in the suburb of Mount Cook, from where it’s a short walk to Rolleston Heights. Here, among native bush and gum trees, is a grassy flat with views of the city and harbour. The couple have lived here for six years and in this area started making art that encouraged participation. They set up a tin can letterbox called ‘Tin Can Post’, where passers-by were encouraged to leave, or take, something.

To encourage picnics, Kemi and Niko created a large wooden picnic box, which was left for people to sit on, or investigate what was left inside. Then, in 2014, they hit upon the idea of building huts out of recycled materials. Each one would represent a particular theme, with its own symbol and story.

The first hut was, Niko says, “the hardest and the most useful”. Constructed in their workshop in sections, it was carried into the Bell Road Reserve, near Rolleston Heights and put together in one day. Set on a slope and built on wooden piles, the diminutive hut has a cladding made from flattened tin cans, a small chimney and even a water tank. Given that the suburb is Mount Cook, it was appropriately dubbed Aoraki Biv. Painted eggshell-blue, its double doors open with a sliding latch, and inside is a logbook, cushion and even a wine glass.

The genius of outdoor art like this is that it’s not only visually interesting, but also a source of inspiration for people to explore their city’s bush and coast. Miniature hikes offer the sort of walk that is a treasure hunt, as well as exercise. And the logbook provides a way for the artists to see how people respond. One walker, upon discovering Robin Hut, wrote: ‘Found this treasure whare on our meanderings … loved the sea breeze and the company of whanau. Glad to leave my mauri here. Nga mihi ano.’ Another wrote of the hut at Tarakena Bay: ‘Yay, we found it. This is swagalicious.’ 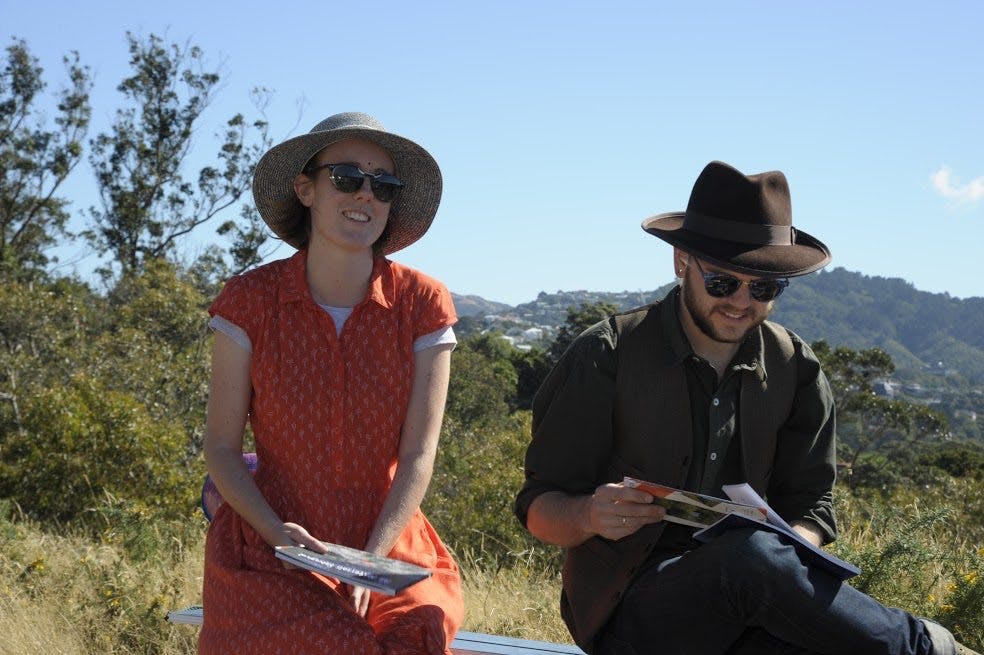 Kemi Whitwell and Niko Leyden at the launch of All Materials Salvaged. Photo: Shaun Barnett

All of the seven sites they chose for the huts are public places, either in the city’s town belt or on local reserves. The hikes are short, but not all are a doddle. The Mt Albert Portal, for example, set in an old concrete bunker overlooking the South Coast, has a difficulty rating of ‘Advanced’. It’s described as a 15-25 minute walk along a well-maintained track with ‘access from main track overgrown with gorse, extra sense of adventure required as well as leg protection.’

Crystal Hut, in a bushy reserve in the Aro Valley, is a vibrant blue, and shaped a bit like a quartz crystal. It’s a reminder of mining huts and hidden treasure. Among Mt Victoria’s gnarled, old man pine trees hangs another of the huts, Trees Hut, which reminds me of a meat safe. Its theme is the deer-culling era, of which the artists wrote: ‘There were pests to kill and only whisky to ease the time. All that time. The bush doesn’t worry about time, it simply keeps growing.’

Robin Hut, situated on a terrace near the old Owhiro Bay quarry, represents the idea of the hut as a memorial. In 2002, Kemi learnt that his uncle, Robin Buxton – a keen tramper and extreme sportsman – had died in a freak rock slide in the Rees Valley of Mt Aspiring National Park. Robin Hut is nestled among boulders, sort of like a memorial cairn, and inside is everything an outdoorsman might need in the afterlife: a knife, candle and can of baked beans.

The last, called DOC Hut, was built on Matiu-Somes Island, in Wellington Harbour. It was created in a frenetic three days from leftover materials in the ranger’s workshop. A day of planning a design was followed by two of building and painting. Protests from little blue penguins coming ashore at night meant tools were downed at dusk, but the artists rose early on the final day with just enough time to finish the hut and catch the last ferry back to the city.

If art should be accessible, participatory and fun, then Kemi and Niko have succeeded spectacularly. Hut baggers, walkers and art-lovers are the grateful recipients. As art critic Mark Amery commented, ‘A brightly painted miniature hut placed in a small area of tussock can make it seem like a grand, distant wilderness.’

In March, Kemi and Niko hosted a picnic on Rolleston Heights, dishing out orange juice, homemade apple cake and sandwiches that they provided. A group of about 40 supporters and enthusiasts gathered in the sun to hear the artists speak about the project, and to launch the resulting book, All Materials Salvaged. Every good tramper needs a map, so the artists illustrated one called Geo-pictorial Map of Welling Town, showing the location of each hut.

The book launch was a participatory event with members of the audience invited to share their own experiences of the huts.

For one man, Robin Hut was a source of inspiration to enjoy an area he’d overlooked. He’d biked past the terrace for years, without ever stopping to look. Searching for the hut with his young son, he was surprised by the scenery that had remained just out of sight. His son asked to go back and camp there. The miniature hikes project has, he said, ‘activated parts of Wellington people never visited’.

For one Wellington woman, Aoraki Biv provided the perfect shelter to catch up with a friend. They both squashed into the hut and stayed there for four hours until sunset.

Almost without exception, people have respected the huts, with no graffiti or damage. However, the one at Tarakena Bay has disappeared three times, giving the term ‘hut bagging’ a whole new meaning. Kemi is philosophical about it. After all, having it stolen is a sure way of knowing people really appreciate your art.