Read more from the
April 2019 Issue

Read more from the
April 2019 Issue

Above the cloud in the Craigieburns

The Craigieburn Range provides ample opportunities for outdoor enthusiasts. Boasting five ski fields and 12 named peaks above 1800m, there’s plenty to keep skiers and trampers happy, all within an easy hour or so’s drive from Christ-church. The two highest peaks are Mt Enys (2194m) and Mt Cloudsley (2107) and a great day trip involves a loop connecting these two peaks. It’s an honest day walk involving around 1900m of total climbing and 20km distance, but you’ll be well-rewarded for your efforts with panoramic views of the Canterbury high country and the Southern Alps. For those who like off-track travel, it’s perfect as most of the route is on untracked ridgelines.

Starting behind Castle Hill Village, the Hogs Back Track leads to a high terrace. The route then branches off the track onto Long Spur, the obvious spur on the left. It is aptly named; by the time you reach Mt Cloudsley at the end of this spur, you will have covered more than 1300m of ascent. There’s nothing too steep though and it’s a nice mix of tussock and scree with a bit of easy scrambling at the top. From Cloudsley, a broad flat ridge with gentle undulations leads 3km south to the high peak of Mt Enys. 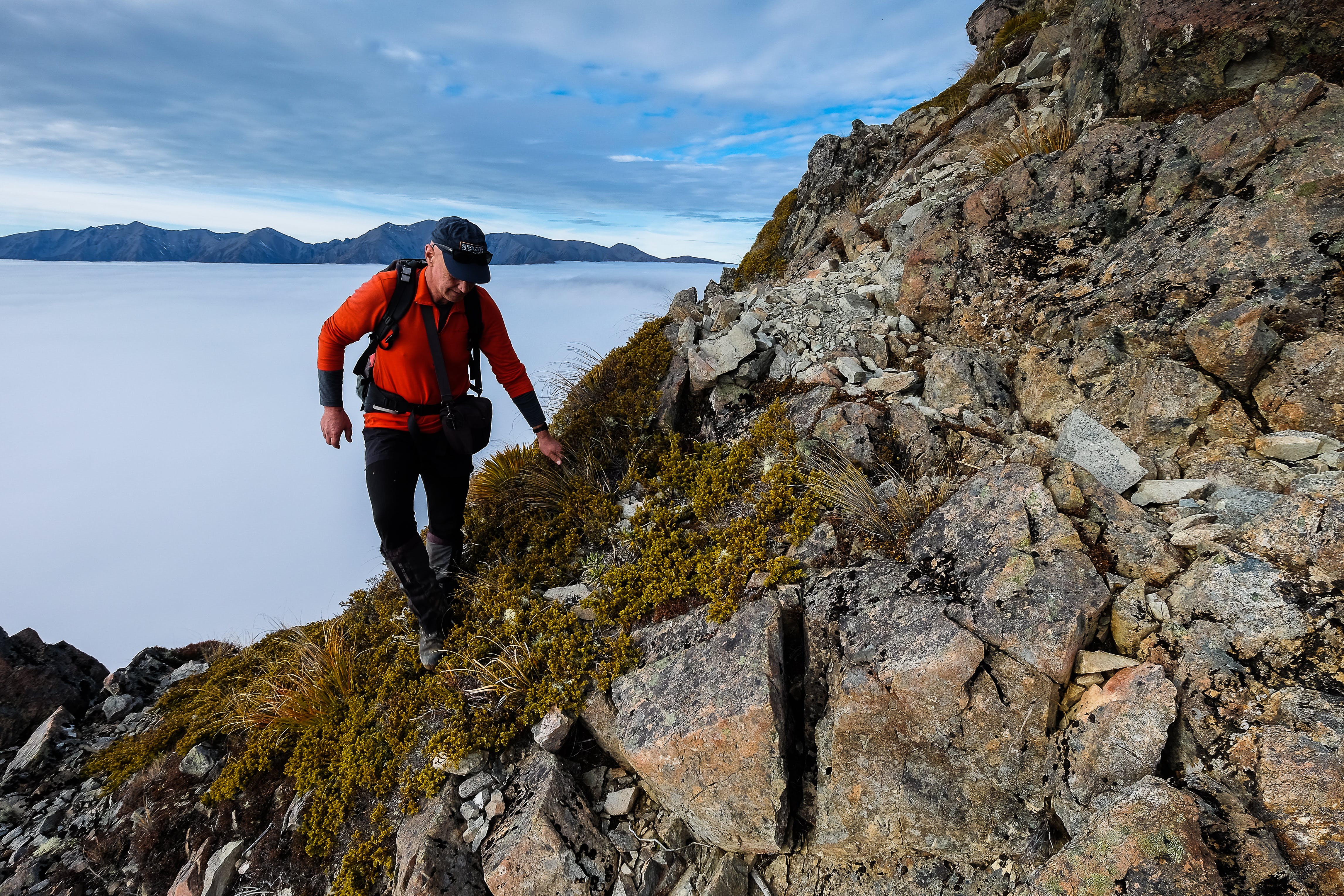 Climbing up Mt Cloudsley with the Torlesse Range floating in the distance. Photo: Jo Stilwell

We couldn’t resist an hour’s coffee stop at the summit. We had started the day in thick cloud, breaking clear of it at around 1400m, and the views were spectacular in all directions. Cloud filled all the valleys from the head of the Rakaia west to Arthur’s Pass, Castle Hill Basin and out over the Canterbury Plains. Sunny mountain ranges emerged from the sea of billowy clouds like islands in the sun. Further south, the big peaks of Whitcombe, Aoraki, Arrowsmith and D’Archiac protruded against the horizon. It was a scene hard to leave knowing our descent would take us back into the cold cloud-sea below.

Our descent route was varied, first taking us over the rocky peak of Carn Brea and then down the enjoyable soft scree of Dead Man Spur. The last 200-300m into Whitewater Creek was steep, but we managed to keep the good scree runs going almost to the bottom. From here, we crossed the saddle to the west of Leath Hill and dropped into the head of Thomas River. Perhaps we had lingered a little too long on top as dark caught up with us at the bush edge.

Fortunately, we found a well-cut track (but no markers) through the forest on the true right of the stream that was easy to follow with headlamps. We emerged at the St Andrews School Lodge, a short walk from our car.

Two high peaks, a good climb, fun scree runs and easy rock scrambles made this an excellent day trip and one that we’re sure to repeat. It was also hard not to be smug considering we spent a lovely autumn day in the warming sun while the rest of the world below was cloaked in cloud.