We could see the storm at our heels.

Completely surrounded by snow, trudging over the alpine saddle, my legs were aching against the cold and exertion. We were less than an hour away from Pinnacles Hut in Mt Somers Conservation Park, the second shelter on Mt Somers Track.

An hour after we started our winter hike the previous day, Metservice had issued a ‘red warning’ for only the second time ever. We didn’t get this warning and were about to be caught in extreme weather that would cause widespread flooding throughout the region. What we expected to be a splash of rain turned out to be the equivalent of Canterbury’s annual rainfall in three days.

Ten minutes after reaching Pinnacles Hut, it started. The wind and rain whipped and wailed and the nearby stream rumbled in warning. This was no ordinary storm. It was obvious that our planned one-night stay would have to be extended.

I put our wet gear to dry above the fireplace while my partner frantically chopped firewood. The fire was the heart of the hut. It kept us dry and cosy for three nights as the storm raged outside.

We were well prepared and experienced. We had suitable gear, extra food, a PLB, crampons and decent practical skills. But, as we lay in our sleeping bags in the darkness, it felt like the storm would never end and as though we were living on a different planet.

It is strange to be in a place of safety during a dangerous situation. Our days of uncertainty were full of the simple pleasures that many people came to appreciate during lockdown. The hut became home as we accepted our plight and settled into a routine. We’d make coffee in the morning, eat breakfast, stretch, play cards, read and put on full wet weather gear (which felt like putting on a hazmat suit) to chop firewood or collect water from the stream. It was noodles for lunch, homemade dehydrated meals for dinner. Although morale was stable, the card games became increasingly competitive. 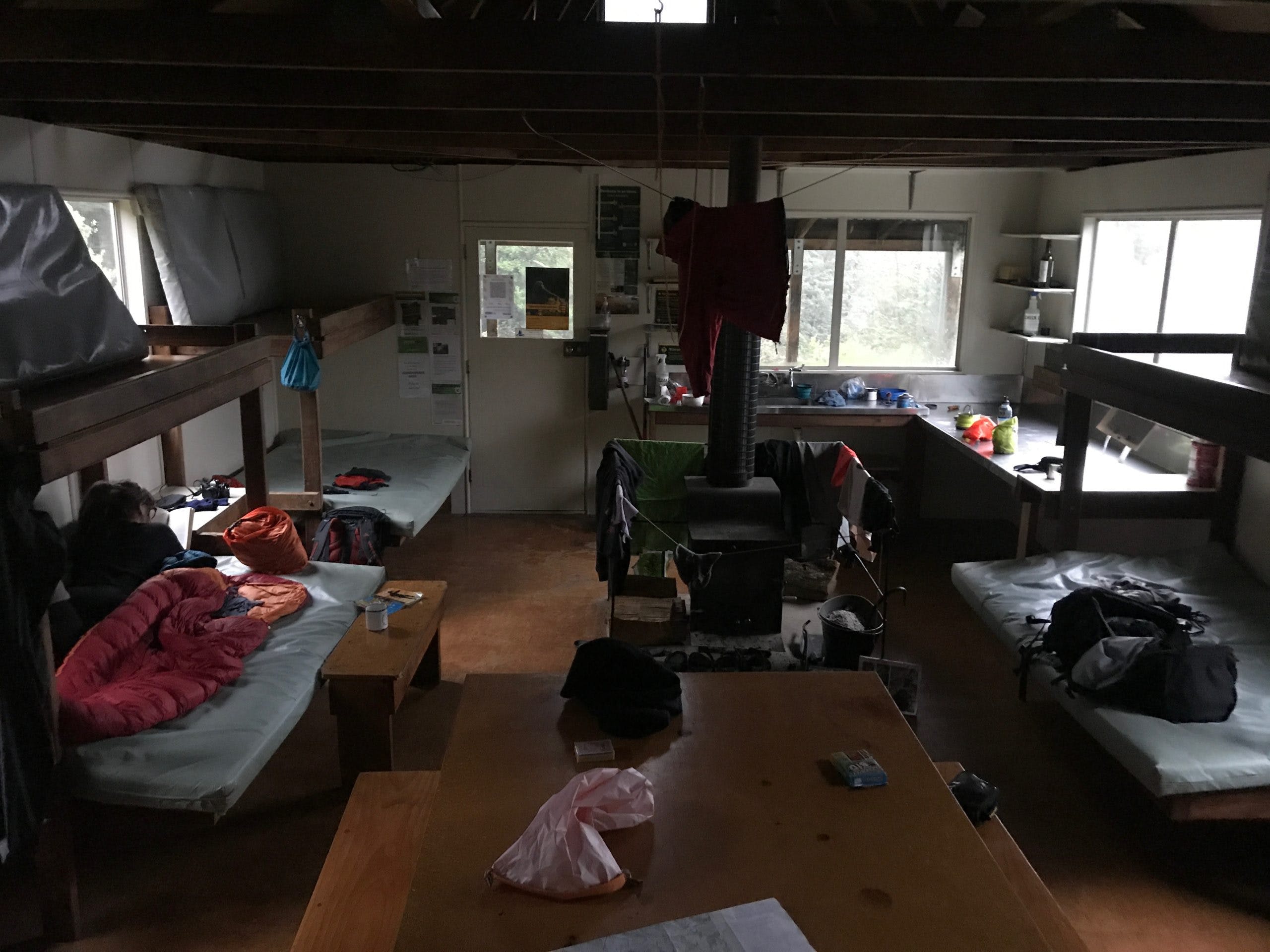 Relaxed and reading in our temporary home while the storm raged outside. Photo: Adam Fulton

Our biggest concerns were our dwindling food supply and how we would walk out while the rivers were flooded and the track most likely damaged. Knowing we didn’t want to eventually walk out on an empty stomach, and sure DOC would understand, we set our sights on the tiny warden’s quarters, empty and locked for the season. After carefully sliding the panels of glass out of the window, my partner boosted me through the tiny opening. We found a dehydrated chickpea curry, porridge, sugar, potato flakes, spare candles. This small bounty brought us such joy.

As the storm continued into the third day, a sense of dread about how we’d get out started growing. Even though our phone was showing No Service, we tried calling 111 and, perhaps because the call was carried by another service provider, we got through and told the police of our predicament. We were told how bleak the situation truly was throughout Canterbury and were told there would be a temporary improvement in the weather the following day and we should attempt to walk out. The road end car park was inaccessible due to liquefaction and storm damage, so our rental car would be left behind (where it stayed for over a month). We would walk down the road to meet a police officer.

After 72 hours of non-stop torrential rain, we woke to find it misty and spitting outside. We had an enormous bowl of porridge and coffee, packed up our gear, and carefully retraced our steps back over the saddle. If the river crossings were too dangerous, we would have to activate the PLB.

At first, we were surrounded by fog but as we climbed higher it cleared and the sun broke through in golden rays to illuminate the misty valleys on one side and the beige fluff of mountain tundra on the other. The Alps provided a glorious backdrop to our return to the real world.

There were many Indiana Jones-esque dangers on our way back: major landslips which had wiped out chunks of the track and uprooted trees, fallen debris and flooded rivers. We assessed the rivers as moving at about walking pace but still crossable by linking arms and using walking poles for support.

We finally made the car park and, after gathering everything from our trapped rental, walked down the road to meet the policewoman waiting for us. Just when we thought we were out of danger, we plunged into waist-deep mud on a piece of road which had undergone liquefaction. We laughed as we walked the final kilometre caked in mud.

The experience gave us a new appreciation for the enormous power of New Zealand’s weather, the importance of flexibility in risk analysis, and the simple pleasures of hut life. If we had stuck to our original plan we may not have made it out. Despite the uncertainty and anxiety we experienced during our ‘lockdown’, living and breathing so closely with nature’s forces gave us an exhilarating jolt of feeling alive.