Do other hut users have a right to ask you to be quiet if they choose to forego their bunk to sleep in the hut’s living area? Michael Hayward doesn’t think so

A quiet game of cards in the candlelight is an innocent pleasure common to many huts around the country. But on a recent trip to Mueller Hut, playing a few hands caused a minor conflict with a man who had foregone his booked bunk space to try for a quieter snooze in the living area.

Sleeping in the new style Department of Conservation (DOC) huts with separate rooms where sleepers are sardined several abreast on two extra-wide bunk beds, can be tricky with snorers and restless sleepers who rustle sleeping bags – even if it is part of the experience.

So when the common room sleeper asked if we would be playing for long, we had some sympathy for the man, but didn’t plan to move out of the common space.

He persisted with his request, and we continued to politely ignore him. By the third time, around 10pm, it had soured the mood.

One of our group, Ffion Jones, said the incident “created an awkward and uncomfortable situation” which ended an incredible day in the hills on a bad note.

She said it was opposite to the atmosphere of co-operation and conviviality typical of tramping.

“I fully endorse the use of communal spaces to sleep in, having slept in them myself when bunks are full, or weather has been too bad for camping, but if you choose to use a communal space because of your own issue, then it is only polite to abide by the communal users. If you don’t like that, bring a tent.” 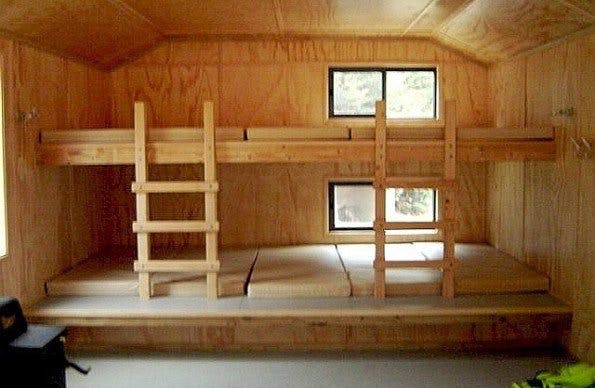 Heading outside, we mentioned our situation to another group taking in the stars. Some thought, given the time, it was fair enough the man wanted some quiet, even if he was in a common area. Others argued the space was free for anyone to use as they saw fit given there were two other rooms designated for sleeping.

The encounter made we wonder whether DOC had any thoughts on the matter, as many modern huts now feature separate sleeping areas and user numbers are increasing.

He said if someone wanted to sleep in the living area, it was “their choice”, but they “should expect to have to put up with people talking and playing cards as it is a communal space for everyone to use”.

“They can also expect the first people up in the morning to use their cookers or make some noise.”

He said most larger huts had two sleeping rooms, and some had more. For example, the design for the replacement Powell Hut (to be rebuilt later this year) in Tararua Forest Park will sleep 32 people in four separate rooms.

New Zealand’s hut culture was unique and has developed over many years based on our egalitarian roots, Dobbie said. As more Kiwi and overseas visitors came to enjoy the hut network, there would inevitably be disagreements from time to time.

He said differences between hut users were likely to increase with more people using the facilities, but the issues were usually minor and had been around as long as huts have.

“In most cases, these differences will simply have to be worked out and resolved by hut users themselves who should be well-prepared for their visits and come with a good attitude, respect for others and an open mind.”