The Department of Conservation is encouraging Abel Tasman National Park visitors to ‘poo in a loo’ this summer.

The campaign aims to reduce toileting in the bush to protect the environment and avoid unsightly human waste and toilet paper by tracks.

“Pooing outdoors is a growing problem on some popular tracks and it’s not feasible or desirable to try to solve this by putting a toilet on every corner in our great outdoors – influencing behaviour is key to solving this problem,” DOC Motueka Operations Manager Mark Townsend said.

Visitors are encouraged to go to the toilet before they start their trip, to plan toilet stops at toilets along the way, and to ‘never say no to a loo when you see one’.

New signage is being trialled on track sections where there are longer gaps between toilets. 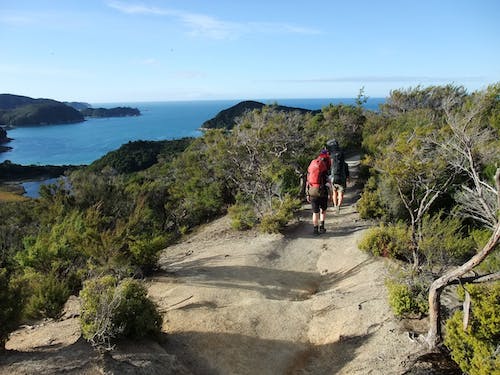 Despite there being 66 toilets on the Abel Tasman Coast Track, some visitors are leaving human waste off-track Photo: DOC

The signs inform visitors of the considerably longer walking time to the next toilet and the short time to the nearest toilet to encourage them to use the nearby toilet before going further.

Of the 66 toilets on the track, most are at huts, camping sites and bays where water taxis pick up and drop off passengers.

The longest stretch between toilets is a 3hr walk between Torrent Bay and Bark Bay where the track runs inland from the coast.

“It’s not a huge thing to ask, really – it’s just about respecting nature, and other trampers and people using the same space,” she said.

Inwood said off-track poopers tend to gravitate towards flat areas, corners and peaks – and will often walk down traplines to do their business, as the bush is clearer.

“Practical things make the difference to where people go and where they don’t go,” she said.

As well as threatening the park’s water quality, the poo problem can be compounded by the wildlife.


“Weka are also picking up and spreading human poo which increases the risk of it being a health hazard,” Townsend said.

DOC’s Design and Evaluation Team is monitoring human waste and toileting items at bush toileting hotspots, and surveying park visitors over summer to ask if they saw the new toilet signs, how well they understood them and whether the signs influenced them to use a toilet.