With the glacier in retreat, new tracks and upgrades are designed to show visitors more of the region than the ice.

After an extensive upgrade, the historic Lake Gault Track near Fox Glacier/Weheka has re-opened. The 8km return track, in Westland/Tai Poutini National Park, is one of several projects funded by a $3.9 million package from the International Visitor Levy (IVL), aimed to boost the local community.

The Fox region has recently suffered a series of setbacks with floods, road and causeway washouts and the main glacier view road now permanently closed, along with ongoing issues of glacier recession.

“It’s been awesome to have this backing, it’s very significant for South Westland and the Fox community. As a result of this funding there will be more opportunities for visitors. Our long term goal is to build resilience here, and to show there is a lot to do other than visiting the glacier.”

The Lake Gault Track was originally cut in the 1930s to provide access to a hydro scheme at Lake Gault. After 20 years of disuse and dereliction, community volunteers, in liaison with DOC, began its resurrection in 2019. It remained a pretty rough trail, says Costello, until a major upgrade was made possible by the injection of IVL funding.

Track-building specialists from WestReef Services worked through winter to complete the upgrade. The metalled, benched track branches off from the Lake Matheson Track and zig zags gently up, through mature podocarp rainforest to Lake Gault. Sweeping views take in the Southern Alps/Kā Tiritiri o te Moana, including Aoraki/Mt Cook and Mt Tasman/Horo-Kōau, reflected on the lake. A shelter, viewing platform and toilet at the lake are part of the package.

The surrounding forest is also home to New Zealand’s rarest kiwi, rowi. Several birds have been released here following the success of DOC’s kiwi recovery programme, which had caused an ‘overflow’ of rowi from their traditional Ōkarito forest home.

The track takes around three hours return from the Lake Matheson car park. 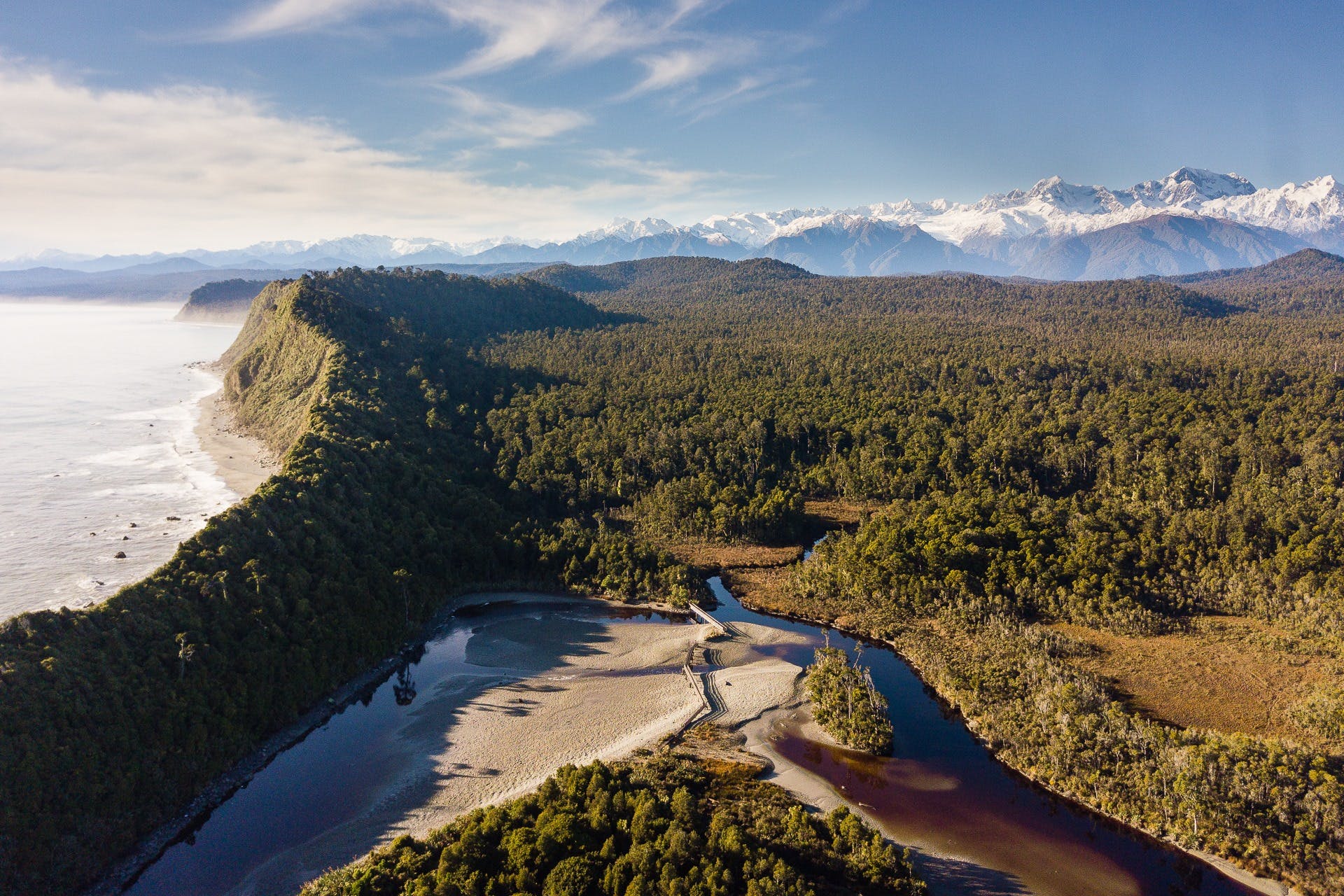 Waikowhai Bluff on the Gillespies Beach to Galway Coastal Trail.

Other local projects enabled by the IVL funding include repairs and upgrades on the Gillespies Beach to Galway Coastal Trail (following damage during Cyclone Fehi in 2018) including a new Waikowhai Bluff lookout, development of the Fox Glacier South Side Walkway/Cycleway (6.4km along the Fox River south bank, over old glacial moraines and through podocarp rainforest, to glacier viewpoints), and a new roadside Glacier Viewpoint, on Cook Road a few kilometres from the township.

Costello said the viewpoint would be outstanding: “The design will be shaped like a waka and will relate the story of the connection of the local Makaawhio people with the mountains and glacier.”

Kaimahi for Nature, the government’s initiative to help maintain employment for COVID-19 affected businesses, is also helping enhance community trails. Fox Glacier Guides staff are working with DOC on an upgrade of the Moraine Walk, which leads off the South Side Walkway/Cycleway, while Lake Matheson Café staff are carrying out daily monitoring of the new Lake Gault Track.

Musings from a track builder

Brendan O’Dwyer works for track-building specialists WestReef Services. He recently published The Last Front Line, a book about his experiences building the Paparoa Track. After two years on the exposed and remote tops of the Paparoa Range, working closer to sea level in South Westland rainforest was a major change, as he writes here:

The job started in January. Fox township was recovering from a series of road closures and bridge washouts and the locals were keen to show that the town was ‘ready for business.’ In my view, the place was already hopping. In the mornings, we’d arrive at Lake Matheson where a line of campervans sat with fogged windows and sleeping occupants. I’d watch the sunrise on Aoraki and I wanted to knock on every camper and drag them out to witness the spectacle.

On the back of the Paparoa Track, we were ready to hit the ground running. Lake Gault was to be built as a walking track only, which called for inside drainage and culverts buried below a crowned track surface. Gone were the days of building cambered mountain bike track.

We were making good progress when Lockdown Level 4 shut us down. We were back to work in Level 3. The isolation of our worksite gave us a ticket to get back amongst it and for that, I was most grateful.

And so, it seemed, was the public. A trickle of locals was followed by folks from further afield who regained their sense of freedom and went back into the hills. Having the public wander through our worksite was new. We were used to being entirely isolated on the Paparoa Range, we wouldn’t see a soul and now we had a community watching us and walkers rocking up at any time. Most were in favour of the work we were doing. Others, perhaps trampers of an older school, would rather see the trail remain as it was, where roots and rocks are obstacles you ought to clamber over and puddles the surface you should expect. I could relate to that and was endeared to the memorable characters that genuinely marvelled at our work and said, despite their preference, how good it was to ‘see a couple of young chaps out there doing it’.

Most of the users wore street shoes, carried water bottles and quite often, Bluetooth speakers. It was obvious many of them had never encountered mud before. In that new social distancing environment, it felt strange to offer a hand to someone who was stuck and it was reassuring when they accepted and I felt that the world still had some sensibility to it.

I couldn’t help myself when one day,I found a candidate for a standing stone, an Irish tradition. Used to such features on Irish homeland soil, I stood it up and dedicated it to a certain someone on my mind. I noticed that most people walked by and never even saw it.

For five months we worked in the shade, frozen in the lee of the hill. Every afternoon, a breeze would pick up and cut the knuckles off us. Then we crested the ridge and had the warmth of the day on our faces. With the sunlight came the knowledge that there was no more climbing and now we had only to descend into the Lake Gault Basin.

On our last shift we had smoko on the lake shore and enjoyed a perfect reflection of the Alps. Often, they were clouded, or a breeze would break the surface of the lake, or the resident ducks and geese would do their part to mock the human need for reflection. On that last day, the conditions were just right.

To the Fox community, who welcomed us and permitted us to leave such an impression on their landscape, I say thank you for having us and making us feel part of your history.