A new climber’s hut has been installed in Aoraki/Mt Cook National Park.

The $100,000 Beetham Valley Hut Mk 2 has been nearly 20 years in the making and has taken the service of hundreds of volunteer hours, Newshub reports.

“Some really interesting challenges that the number 8 wire mentality of Kiwis is able to get a temporary foothold of the brutal elements up there,” project manager Johnathan McFarlane said.

“The last three huts have all come to an untimely demise through either changes in the land around them or avalanches.”

The new hut was installed away from avalanche risk, and will provide a safe refuge for climbers about half-way along the Tasman Glacier. 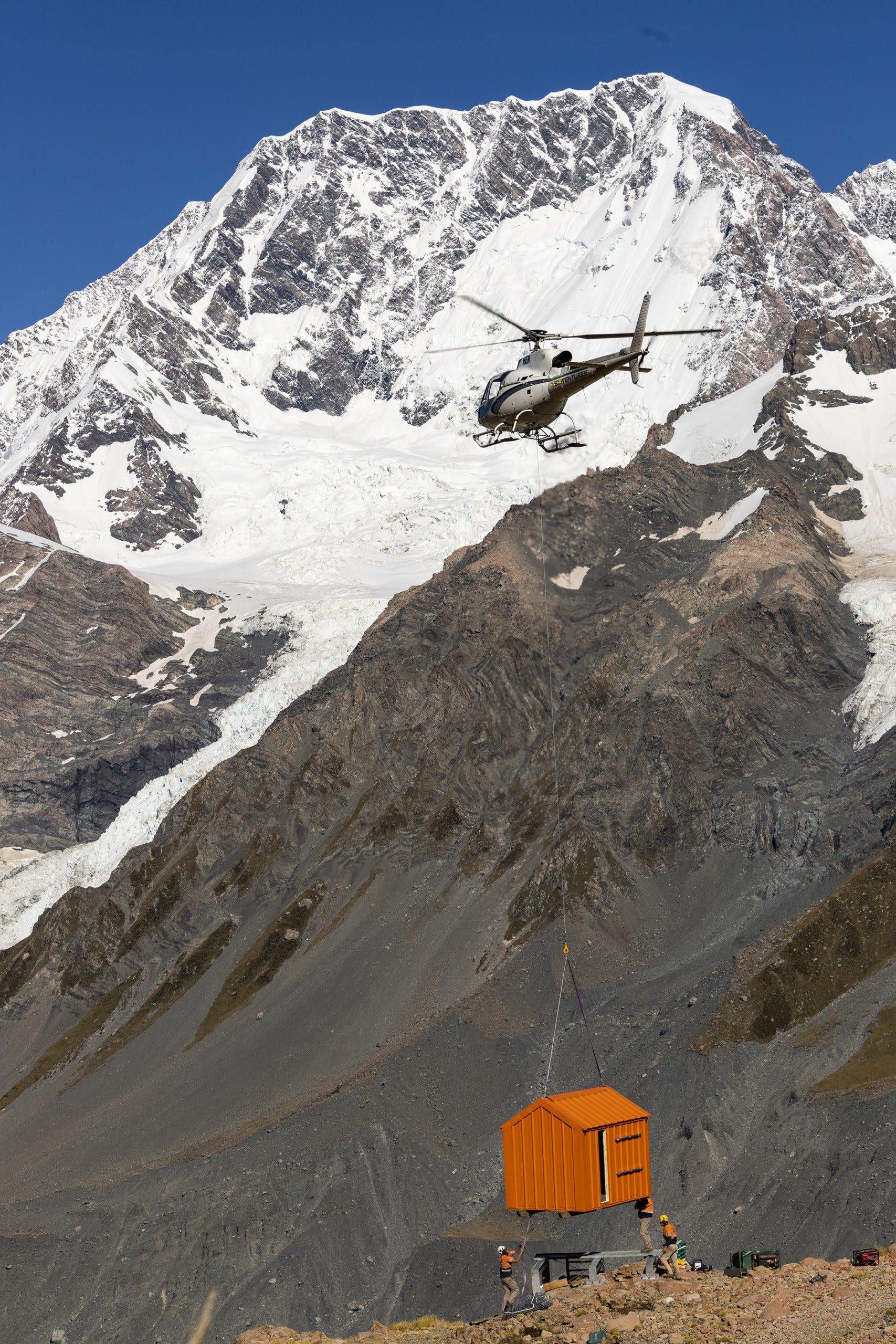 The building team took inspiration from NASA and Antarctica New Zealand when designing the hut.

“We looked at what went wrong and what went right and then we kind of kept on innovating,” McFarlane said.

The final build will provide a blueprint for future huts.

“It’s got the ability to set a precedent for what alpine huts can be, the comfort levels, the structural integrity and the ability to withstand high winds,” Cowie said.

A Canterbury ski field is slowly erasing historical ties to a Nazi officer – but it’s not there yet, Newsroom reports.

He died last year, but the ski field promised to continue to honour him with the name of its restaurant and ski run – a promise that was met by outrage.

A petition was launched, asking for his name to be removed from the ski field, and it was signed by thousands.

Newsroom’s search of the Mt Hutt website discovered Huber’s Run has since been removed from the map, and the restaurant has been renamed Ōpuke Kai.

NZSki boss Paul Anderson said that decision was made early this year.

“We’ve had to take care on the way through to respect the views of a wide range of people and recognise that there were diverse opinions on the issue. We’ve just come to our decision that it’s time to move forward,” he said.

The only remaining link to Huber is a plaque marking the site of a historical hut, which Anderson says won’t be removed.

According to Otago Daily Times, mischievous kea have been vandalising stoat traps in the Matukituki Valley, near Wanaka.

“We were finding all these stoat traps had been turned over and some looked like they had been vandalised,” he said.

“But then we also found damaged traps up the Young River and other places where no-one ever goes, so it was obviously kea.”

The birds had been turning the traps over to break the chicken egg bait inside, to get at the raw egg.

There was also evidence they had used a stick to make a hole in eggs, undo screws and bend the wire grilles.

Penniket said kea have recently reappeared in the Matukituki Valley in significant numbers.

“All these juvenile kea hanging around in mobs — people have not seen that since the ’70s,” he said.

The discovery of a hedgehog at 2000m has shocked conservationists.

The prickly pest was sighted on an infrared camera in the Mackenzie Basin, TVNZ reports.

“It was quite a surprise to be flicking through camera footage from above 1900m and to see a little spiky hedgehog wander by,” Te Manahuna Aoraki researcher Nick Foster said.

“I usually think of them in a garden in England.”

Hedgehogs prey on native invertebrates, skinks and ground nesting birds, and an ongoing trial project is attempting to eradicate them entirely from a 2500 hectare area in the basin.

“If we did remove them, there could be twice as much birdlife out there,” Foster said.

A scenic flight company operating at Tongariro National Park has closed, citing a lack of business due to Covid.

Mountain Air Volcanic Flights operates from the Chateau Airfield on the edge of Tongariro National Park, and has been flying since 1988.

“When you’ve invested so much into a business – time, effort, money – you want to keep it going,” he said.