Rather than curtail their trips, having a baby has allowed Jennifer Haslam’s family to experience the outdoors in a whole new light – and that was especially the case on a Christmas trip to the Hollyford Track.

There was neither turkey nor tinsel last Christmas when our family headed onto the Hollyford Track for our festive-season break. Instead, there was native bird song and mistletoe resplendent in its crimson drapery.

I had read the story ‘Babe in the woods’ and one of the recommended walks for those with little ones was to Hidden Falls Hut. This is where my family and I went over the Christmas just passed. We love our time in the hills and even though life has changed with the introduction of our son Jacob, I am increasingly seeing his arrival has heralded an evolution and not an ending so far as our relationship with the outdoors is concerned.

Fiordland only deals in the currency of visual superlatives and the Hollyford Valley is no exception. The Hollyford Road itself is a journey and I breathed more deeply as we wound through its infinity of green, with occasional peeps of the spangled river. 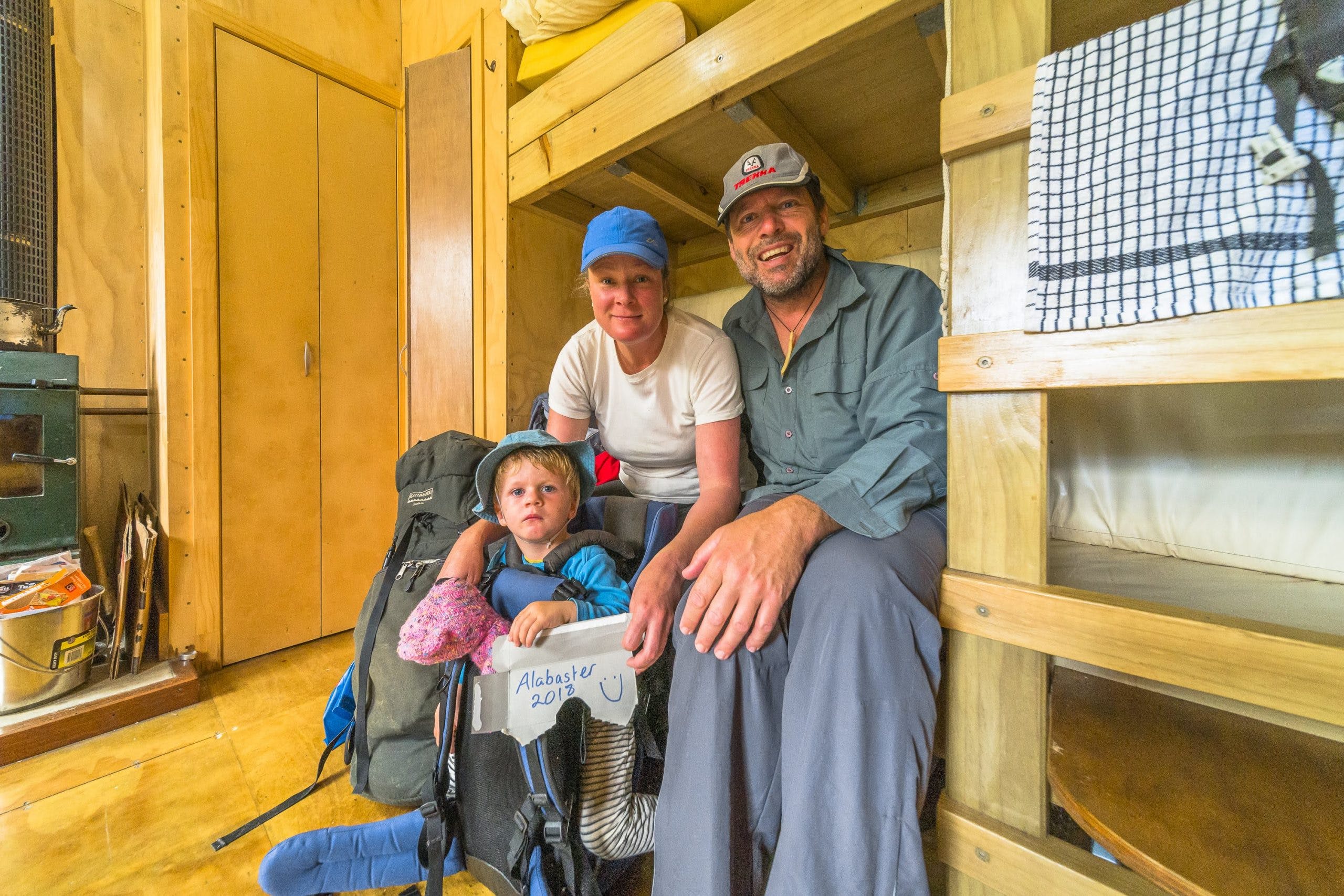 Out of the car, sandflies soon spurred us into action, but we went only as far as the Hollyford River, where we stopped to throw stones into its jewelled surface, an activity for which my son Jacob knew no bounds. We saw a long-fin eel as it nudged amongst the rocks and logs.

It took about four hours to reach Hidden Falls Hut – we were in no rush and stopped or slowed down at every opportunity – photo-taking, talking to other trampers and orchid spotting.

At the hut, a breeze kept the sandflies at bay but brought with it copious amounts of grass pollen which triggered hayfever. It wasn’t long before the tissue pile and accompanying lamentations mounted.

The next day we headed through billowing pollen to Hidden Falls Creek, where we spent a happy several hours relaxing, exploring and having the occasional bracing swim.

That night, the freckling of stars and glowing moon seemed closer than when in a town.

There were hundreds of kakapowai (giant bush dragonflies) which accompanied us when we walked along to Lake Alabaster the next morning. They were huge but not frightening, as they flitted between the sunny spots. It was a real treat when one landed on my arm and looked up at me out of her great disc-shaped eyes. 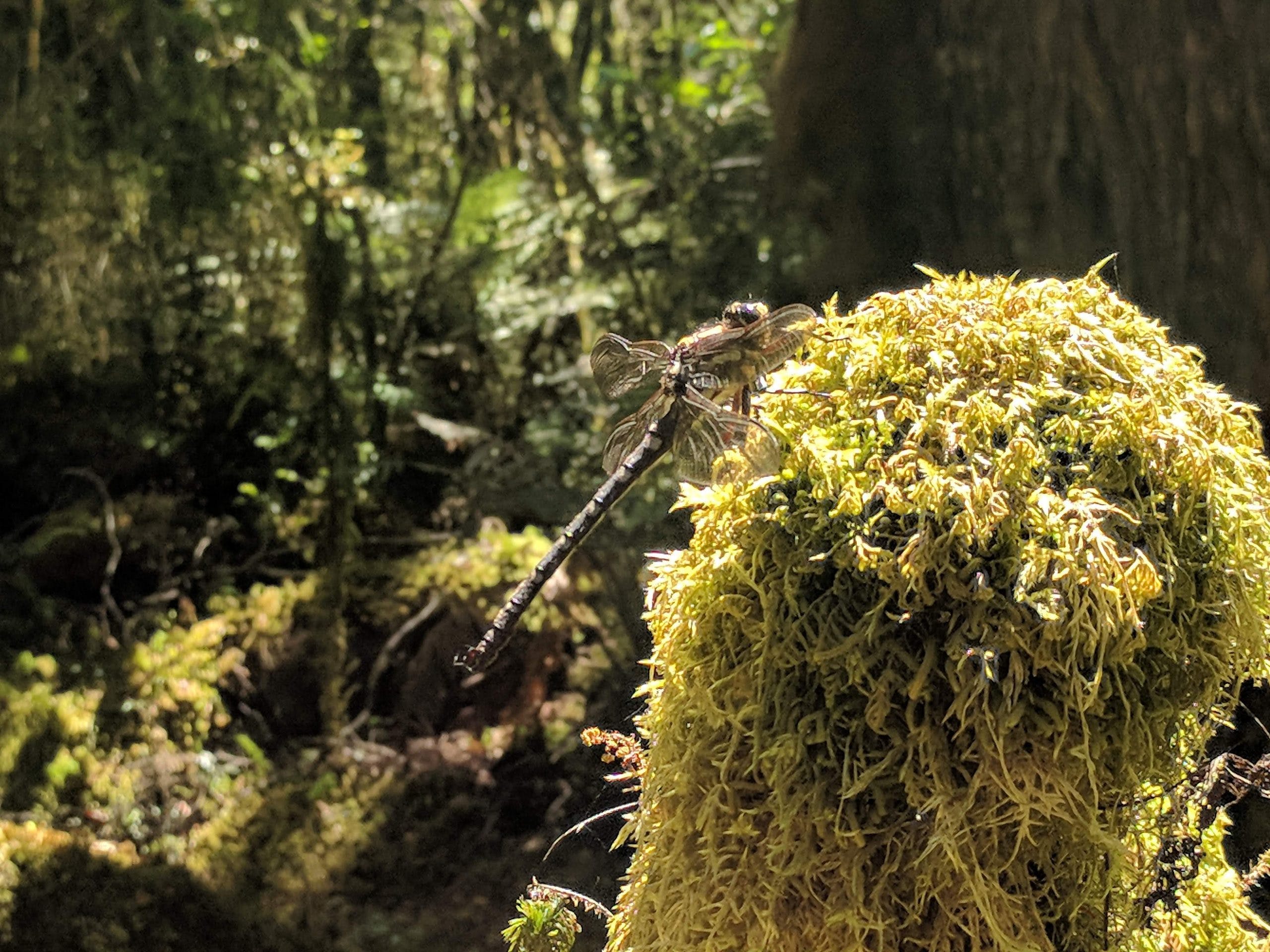 We were famished by the time we arrived at Alabaster Hut and a tramper called Dave, who was camping in the bush for a few days, joined us for our Christmas meal. I first met Dave a few years ago when I was working on the Milford Track, where he attained a moderate level of notoriety by carrying his windsurfing board through the track (that’s another story). It was a happy surprise to see him again these years later. He’s a real character and a walking advertisement that you don’t necessarily need all the flash new gear to have a safe and comfortable time in the hills.

The hut was nearly full, mainly with people who were pack rafting, which has become a popular activity here.

We felt spoiled the next day as the fair-weather continued for our hike back to Hidden Falls Hut.

After a final night at the hut, we walked to the road end with lighter packs and many emotions. We were sad to be leaving the bush, happy and restored to have been there, ecstatic to leave the pollen behind, and excited to get back and see friends and family.

Undertaking a multiday hike with a 19kg toddler isn’t everyone’s idea of a walk in the park, but with a little planning and realistic goal setting, it is possible for a fun time to be had by all. For us adults, it was great to slow down a bit and experience the world through a toddler’s eyes.