A mountaineering accident that she was lucky to survive hasn’t prevented Heather Rhodes from returning to the mountains she loves, but the road to recovery has not been easy, she tells Edith Leigh.

It took 15 months for Heather Rhodes to begin to realise “how broken” she was after a horrific mountaineering fall left her in a coma with a broken back, neck and a snapped leg.

Amnesia from 24 hours before the accident to five weeks after it means she has no memory of the 300m fall on the Cameron Glacier in the Arrowsmith Range. An anchor, which had held her two climbing companions, failed as she was abseiling down a couloir.

From the outside, Rhodes’ recovery looks nothing short of miraculous. The day before she spoke to Wilderness, she cycled 40km to a doctor’s appointment. The former army outdoor instructor has been back tramping, rock-climbing and whitewater kayaking. However, she still suffers from extreme tiredness and sometimes her leg is so sore the only way to combat the pain is to knock herself out with a sleeping pill.

Seventeen months after the accident, the 37-year-old walked up to Mueller Hut, ‘crutching’ to Sealy Tarns and then walking through the snow with walking poles to the hut. Her right leg, the one that snapped in the fall with compound fractures of her fibula and tibia bones,  got “pretty sore”, she says. “When another tramper stopped to talk to me, I was blinking back tears feeling really stupid and that I shouldn’t be here.”

The next day her left leg, which was also broken in the accident but nowhere near as badly, and which usually gave her no trouble, was really sore. A person needs to have one good leg to be able to use crutches. “I was thinking ‘shit, am I going to have to get a helicopter to come and pick me up’? Luckily I was able to stay another night and I managed to walk back.”

In a series of photos taken on a recent holiday, many of them show her lying beside her pack napping or reading, surrounded by beech forest or with snow-capped peaks behind her. “This is what tramping looks like for me now,” Rhodes laughs.

On a recent solo tramp, what should have been a two-hour climb to a nice camping spot on the bushline took her six hours – “and that was three hours walking and three hours sitting reading my book.

Doctors haven’t really given her a prognosis on her recovery, she says, but she has started to explore alternative methods of healing, such as qigong.

Exactly what went wrong on the day of her accident is still an unanswered question for Rhodes. She and her two companions, Vaughan Snowdon and Simon Bell, had been retreating from their route after spending eight hours sheltering beneath an ice bulge from falling rocks and ice. Ironically, they had decided abseiling would be safer than down-climbing. She was the last one to abseil off the single snow stake before it failed and she hurtled past her shocked companions to what they were sure must be her certain death. 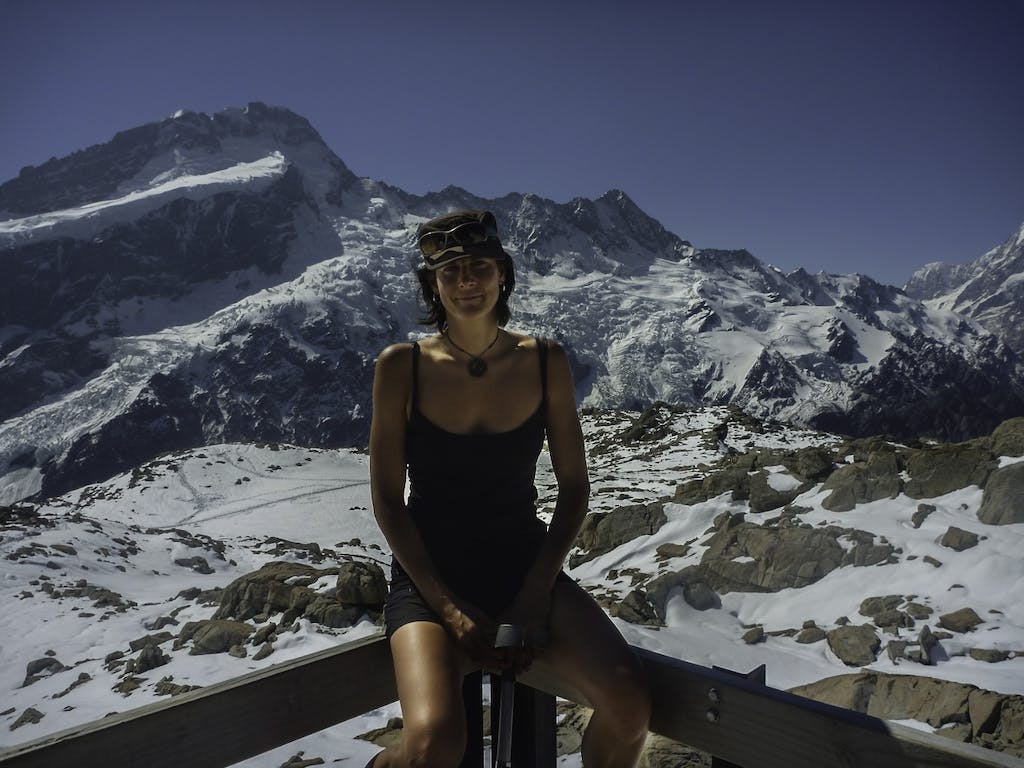 Snowdon says after a difficult down-climb they found Rhodes tangled up in 120m of rope, unresponsive but still breathing. They activated the personal locator beacon in the top of her pack and then painstakingly cut all the rope away from her ending up with an armful of little bits of rope. Then they got her off the snow and kept her as warm as possible until a rescue helicopter arrived.

On her way down, Rhodes had crossed a shrund “big enough to easily fit a bus inside it” and Snowdon believes it was because she was travelling so fast that she bounced across it. “If she had gone down that, rescuing her without ropes would have been difficult.”

Witnessing first-hand the consequences of when things go terribly wrong hasn’t stopped him from climbing, but he is more cautious than he used to be, Snowdon says.

“It’s not actually a great deal of fun what she has gone through and still has to go through. Recovery is long-term thing.”

Since the accident Rhodes became friends with the pair, who she had only met the night before their ill-fated trip. She spent last Christmas with both of them, but in a cruel twist Rhodes and Snowdon found themselves attending a memorial service for Bell in February.

Bell is presumed dead after he was reported missing in the Mt Earnslaw area. A sleeping bag and other personal items believed to belong to him were found at Esquilant Bivvy but subsequent

searches of the area have found no trace of him. “I trust he is in a good place. I totally think there is life after death, but it’s pretty tough on his close friends and family,” Rhodes says.

Of her own journey, Rhodes says people often tell her she is an inspiration, but it’s not an accolade that sits easily with her. “I think it is just as inspirational to say ‘tramping is what I used to do, but it’s not going to happen again and playing the piano is my thing now’.”

Where her future might take her she is not sure. She applied for and was accepted into medical school, but has put her entry on hold for a year, as she is not sure she can even stay awake long enough for the gruelling hours of study, or if her leg would hold up to walking around the hospital for ward rounds. For now she is looking for part-time work and is grateful she has friends and family helping her get out on adventures and to get on with life.

“You don’t get to choose the experiences you will have in life. Life is not fair but life is also an incredible gift, full stop.”

For 29 years Wilderness has helped Kiwis get outside.

If you value our mission: to help you ‘see more, do more, live more’, then please consider subscribing.

Once you sign up, you can browse all web content including more than 610 trips. You’ll also receive our Wildcard, offering discounts at more than 20 partners throughout New Zealand.

Importanly, your subscription will ensure Wilderness will be there to inspire the next generation of outdoor Kiwis

Buy an annual print+website or website-only subscription and we’ll gift you a SOL Heatsheets survival blanket worth $20 (NZ subscribers only). This compact blanket features bright orange exterior to make it an easy to spot and it reflects up to 90% of radiated body heat. Pack it on every hike. Simply use coupon code ‘eblanket‘ at checkout.

Buy an annual print+website or website-only subscription and we’ll gift you a SOL Heatsheets survival blanket worth $20 (NZ subscribers only). This compact blanket features bright orange exterior to make it an easy to spot and it reflects up to 90% of radiated body heat. Pack it on every hike. Simply use coupon code ‘eblanket‘ at checkout.

But if you’d rather pay month-to-month, buy a monthly website-only subscription and use coupon code ‘six12‘ to pay just $6.00/month (normally $7) for the first 12 months (after the 12th payment, the subscription price will revert to the current monthly rate). Give it a try – you can cancel at any time. Click here to sign up.